Symbolism in Art: The Pillow 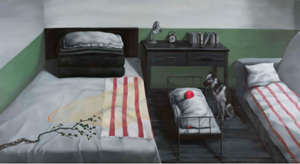 Contemporary Chinese surrealist painter and sculptor Zhang Xiaogang was born in Southern China in 1958. Often seen as Avant-Garde, Xiaogang’s artistic life has witnessed several important moments in China’s history, many of which are explored within his work. Perhaps the most defining brush with the political regime occurred during the early stages of Xiaogang’s life when he was brutally separated from his parents during the Cultural Revolution. They were sent to one of Mao’s notorious ‘study camps’, leaving him and his siblings behind.

Contemporary Chinese surrealist painter and sculptor Zhang Xiaogang was born in Southern China in 1958. Often seen as Avant-Garde, Xiaogang’s artistic life has witnessed several important moments in China’s history, many of which are explored within his work. Perhaps the most defining brush with the political regime occurred during the early stages of Xiaogang’s life when he was brutally separated from his parents during the Cultural Revolution. They were sent to one of Mao’s notorious ‘study camps’, leaving him and his siblings behind.

Following the demise of the revolution, Xiaogang was offered a place at the prestigious Sichuan Institute of Fine Arts, where he began to explore his unique style, attracting attention from both art critics and curators.

Xiaogang’s work seems to explores the notion of family. Many of his paintings play with traditional Chinese techniques - charcoal drawings of family portraits, overlaid with contemporary Western surrealism. Splotches of colour and contrasting imperfections jump out at the viewer, playing with and distorting our sense of the ‘normal’. The figures and scenes in his work seem at once familiar and other. Through the endless stream of faces and places we catch a glimpse of the masses, the faceless inhabitants of a systematised world. Their identity is rendered inconsequential.

Afternoon No. 2 is an unusual work for Xiaogang. Instead of rigid faces staring out of the canvas we see a bedroom scene, almost prison-like in its formality. There is a young child laying nearby in a stark cot. The brightest colours in the image are reserved for the child, a bold red tone, contrasting with the drab surroundings.

The overall image is brutal and austere, but there are softer touches – perhaps most notably the presence of three soft pillows. The most prominent lies at the head of the main bed in the room, resting on top of two firm-looking folded blankets. The softness of the pillow is in stark contrast to the severity of the blankets beneath it. It’s comfort and support is lost as it towers out of reach at the top of the pile.

Pillows and cushions hold deep symbolism in art, being mementos of some of our most private and intimate moments. There is something deeply personal about the pillow. Each of us has one, retiring to it at our most genuine and vulnerable moments, either alone or with a partner with whom we can share ‘pillow talk’.

Thanks to this connection, the pillow, when out of place or out of context, can feel uncanny, unnerving or unsettling. For many, it is only on retreating to your pillow every evening that you’re true self can be expressed. For others, the pillow feels closely associated with loneliness, with being away from others – taking support from an inanimate object rather than the pleasures of human contact.

In Afternoon No. 2 the pillow is inaccessible, out of reach and worn out. It is both discoloured and disappointingly flat. Even without the tower of blankets that separates it from performing its supporting role, the pillow on the adult bed does not look like it could offer support, although the young child sleeps soundly, wrapped in blankets and resting it’s head softly.