Taus Makhacheva is Cosmoscow 2018 Artist of the Year 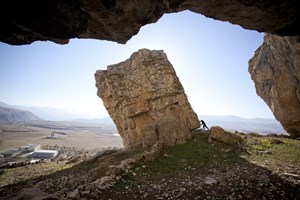 Cosmoscow, international contemporary art fair in Russia and the CIS, announces the 2018 edition of the fair will open from 6 – 9 September at Moscow’s Gostiny Dvor.

Cosmoscow, international contemporary art fair in Russia and the CIS, announces the 2018 edition of the fair will open from 6 – 9 September at Moscow’s Gostiny Dvor.

The 2018 edition will feature a number of specially commissioned projects, including a new solo project by Taus Makhacheva – who has been named as Cosmoscow 2018 Artist of the Year – and a site-specific project by Alexey Martins who was recently announced as winner of 2017 Ruinart Art Patronat grant.

Russian artist Taus Makhacheva has been announced as the Cosmoscow 2018 Artist of the Year by the Cosmoscow Foundation for Contemporary Art. Taus has been invited to create a new commission that will be presented as part of the fair’s non-commercial programme and imagery of an existing work will be used throughout Cosmoscow 2018 visual identity. Taus Makhacheva (b. 1983) was also the recipient of Kandinsky Prize (2016) and Innovation Prize (2011), among others. In 2017 her work Tightrope (2015) was featured in the main project of the 57th Venice Biennale. The longlist of Cosmoscow 2018 Artist of the Year nominees was created by the Cosmoscow Foundation for Contemporary Art Expert Committee (Joseph Bakstein, Danila Bulatov, Valentin Dyakonov, Irina Gorlova, and Anna Tolstova). The winner was selected by the Foundation Board members (Marina Andreeva, Elena Latypova, Simon Mraz, and Valeriya Rodnyanskaya).