The 37-Metre-Long Work by KAWS was Floated out Into Victoria Harbour, Hong Kong 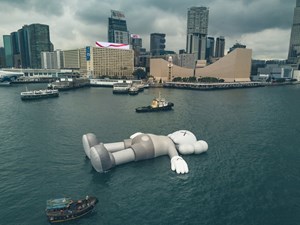 Hundreds of Kaws fans flocked to the waterfront off Tamar Park in Admiralty on Friday afternoon for some rest and restoration as the American artist’s new 37-metre-long relaxation-themed sculpture floated out into Hong Kong’s iconic Victoria Harbour.

Hundreds of Kaws fans flocked to the waterfront off Tamar Park in Admiralty on Friday afternoon for some rest and restoration as the American artist’s new 37-metre-long relaxation-themed sculpture floated out into Hong Kong’s iconic Victoria Harbour.

After visiting Seoul and Taipei, the latest artwork by the artist, titled Kaws: Holiday, landed in Hong Kong and was towed by tugboats from the waters off the Convention and Exhibition Centre in Wan Chai to Admiralty, where it will remain in a recumbent posture until the end of the month. 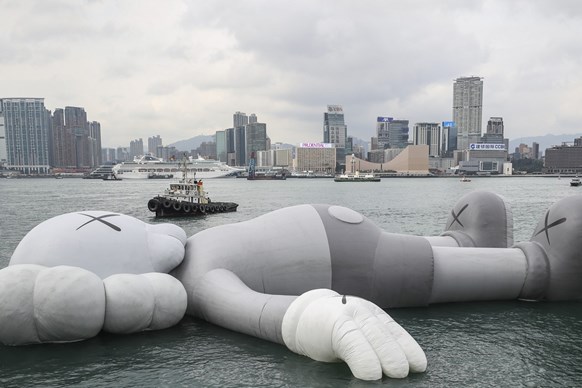 Kaws – real name Brian Donnelly – said he wanted his sculpture, which is based on his signature character Companion with crosses for eyes, to encourage people in the fast-paced and often frenetic city to slow down and take a break, and those further afield too.

“Just thinking about the world today, I wanted to create a work that was sort of relaxed and get people to take a moment for themselves, so that explains the position of him just lying on his back and looking at the sky,” he said.

Donnelly also said that with Hong Kong being such a busy city, he thought it would be a good juxtaposition to have such a piece floating languidly in Victoria Harbour. 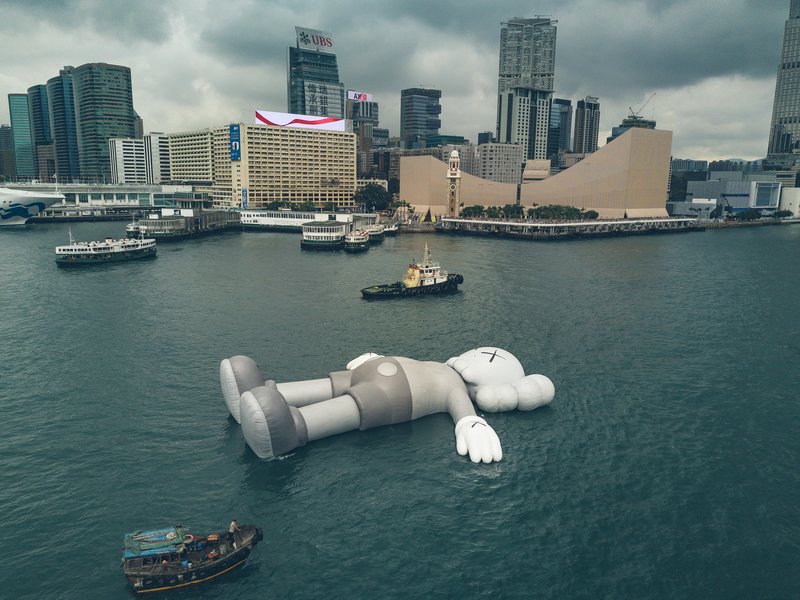 Looking at his sculpture, Donnelly joked: “I want to go take a nap.”

Curator and creative director of AllRightsReserved Lam Shu-kam, who coordinated the exhibition spoke of the challenges posed by the project.

“As the exhibition is in Victoria Harbour, there are some waves, unlike if it were put in a lake,” he said, adding that staff had to ensure water did not infiltrate the sculpture.

He also added that this artwork was bigger than the 16.5-metre tall Rubber Duck by Dutch artist Florentijn Hofman that took up residence in Victoria Harbour in 2013.

Lam said it took eight months for his team to make preparations this time round.

A Kaws fan, who wished to be known as just Sze, took a half-day off to check out the artwork with his girlfriend.

“I was worried there’d be too many people tomorrow,” he said.

Sze has around 10 Kaws products, including a toy produced in 2002. He became a fan after the artist’s last Hong Kong exhibition, at Harbour City in 2014.

A mainland university student said she came to check out the exhibition because her idols BTS are big Kaws fans.

“I came to Hong Kong last night to watch their concert and I wanted to see if BTS will come here too,” the 19-year-old student from Guangzhou, who wished to be known as just Chen said.

The popular K-Pop boy band are currently in Hong Kong for a series of concerts, running till Sunday.

While Chen thought it was unlikely that BTS would visit the exhibition, she felt that seeing the sculpture was a way of connecting with her idols.

Freelance balloon artist Alice Hsu was spotted along the promenade carrying her own mini Kaws:Holiday she made in an hour using about 10 balloons.

“I like him because his eyes are crosses and his legs look like Mickey Mouse’s,” she said.

Hsu said several fans had approached her while she was taking selfies with the artwork to ask if she could also make one for them.

She hoped to return on a day with better weather to take more photos with Kaws:Holiday.