“The Architect’s Home in the Ravine” by Peter Doig 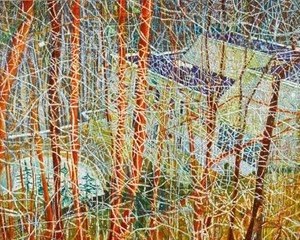 Peter Doig’s landmark The Architect’s Home in the Ravine returns to auction on 7 March to lead Sotheby’s Evening Sale of Contemporary art. Estimated at £14-18 million, the painting dates from 1991, an important milestone in the artist’s career, when, just a year after graduating from his Master’s degree at Chelsea, he was awarded the highly prestigious Whitechapel Artist’s award.

The Architect’s Home in the Ravine was one of only four works the artist chose to be included in the subsequent show at the Whitechapel Gallery. Others include Iron Hill (1991) which became the first work by the artist to sell for over £1 million at Sotheby’s auction in 2006, and Rosedale (1991) which established a new $28.8 million auction record for any living British artist last year. The Architect’s Home in the Ravine was further selected for Doig’s first major institutional show - his 1996 exhibition at the Gesellschaft für Aktuelle Kunst in Bremen, Germany.

The Architect’s Home in the Ravine refers to a building remembered from the artist’s childhood in Canada – the home of Eberhard Zeidler, which is situated in the wealthy Toronto suburb of Rosedale. However, whilst this is the stated subject, the eerie mood and the composition can be better traced to a celebrated building by architect Le Corbusier, the Untié d’Habitation in Briey-en-Fôret in North-East France. In the summer of 1991 Doig visited this site as part of a team of artists and architects working on its restoration; the building had been derelict since 1973. He was struck by the view of the modernist building from the dense surrounding forest. It appeared just out of reach; at once threatening and inviting, comforting and obscure.

Le Corbusier’s building at Briey is referenced in the The Architect’s Home in the Ravine through the coloured panels that bedeck the front of the house, only just visible through the thickets of forest. Doig would refer back to the building repeatedly and in more explicit terms in the celebrated Concrete Cabin paintings that were executed between 1992 and 1996. This conflation of physical experience and emotive recollection is typical of Doig. He is an artist of oneiric atmosphere whose works are as much meditations on the concept of memory itself as musings on previous personal experience.