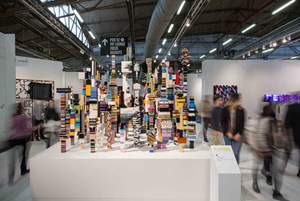 The 24th edition of The Armory Show will open with a VIP Preview Day on Wednesday, March 7; the fair will be open to the public March 8–11

On the exterior of Pier 94, the artist and 2018 Academy Award nominee, JR, will debut a monumental work, transforming archival Ellis Island photographs into a large-scale installation. Presented in partnership with Artsy and Jeffrey Deitch, SO CLOSE (2018) is the marquee feature of the fair’s Platform section, curated by Jen Mergel, who has selected fifteen site-responsive works sited around Pier 92 & 94 under the theme, The Contingent. SO CLOSE is a continuation of Artsy’s six-year relationship with the fair and extends Artsy’s tradition of presenting site-specific artist projects at The Armory Show. Upon entry to the fair, visitors will be faced with the super-sized tableau of a line of immigrants, waiting. The faces in the archival image from Ellis Island are updated with Syrians’ portraits JR took at the Zaatari refugee camp in 2017. Like his recent image of the smiling toddler Kikito strategically installed on scaffolding in Tecate, peering over U.S.-Mexican border wall from the California side, the supersized silhouettes of SO CLOSE are sited at a symbolic point of entry—to the city, to the country, and to the art world. The new installation expands on JR’s provocative and often politically-charged public interventions that paste large-scale black-and-white photographs of individuals across cities’ architecture, re-weaving a human presence into the urban fabric. Building upon his UNFRAMED series of borrowed photographs, SO CLOSE collapses history and geography, responding directly to the global immigration crises. SO CLOSE will be the first work seen by visitors as part of The Contingent, which responds to the unfolding zeitgeist that Mergel defines as the “rise of collective action in the face of a prevalence of uncertainty.”

Highlights include a keynote by Hans Ulrich Obrist, Artistic Director of Serpentine Galleries, on exhibition making in the 21st century; solo artist conversations with JR, Hermann Nitsch and Carolee Schneemann; artists-in-dialogue pairings featuring Constant Dullaart and Matt Goerzen; Leonardo Drew and Ja'Tovia Gary; and Josh Kline and Patty Chang; and a series of panels addressing the future of the gallery model, the rapid growth of new cultural centers globally and the paradoxical conditions for political resistance.

Image on top: Photo by Jennifer Calais | Courtesy of The Armory Show