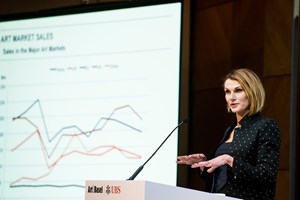 Art Basel and UBS have recently published the second edition of the Art Basel and UBS Global Art Market Report. Written by renowned cultural economist Dr Clare McAndrew, Founder of Arts Economics, The Art Market 2018 presents the results of a comprehensive and macro-level analysis of the global art market in 2017.

Art Basel and UBS have recently published the second edition of the Art Basel and UBS Global Art Market Report. Written by renowned cultural economist Dr Clare McAndrew, Founder of Arts Economics, The Art Market 2018 presents the results of a comprehensive and macro-level analysis of the global art market in 2017. Last year, the global art market grew by 12%, reaching an estimated $63.7 billion, with the United States retaining its position as the largest market and China narrowly overtaking the United Kingdom in second place. In 2017, dealer sales increased 4% year-on-year to an estimated $33.7 billion, representing a 53% share of the market, while public auction sales increased 27% to $28.5 billion, a 47% share. Much of the uplift in sales in the auction and dealer sectors was at the top end of the market; away from the premium price segment, overall market performance was mixed.

Key findings of The Art Basel and UBS Global Art Market Report include:

Global Sales: Following two years of declining sales, in 2017 the market turned a corner with increasing sales in both the dealer and auction sector. The art market achieved total sales of an estimated $63.7 billion in 2017, an increase of 12% on 2016. The volume of sales (number of transactions) grew more moderately than values, at 8% year-on-year. The value gains were driven by sales at the top end of the market, capped by record prices in the auction sector. Away from the premium price segment, overall market performance was mixed. In 2017, aggregate sales by dealers accounted for a larger share of the market, at 53% by value, with total auction sales accounting for 47%.

Dealer Figures: Sales in the dealer sector increased 4% year-on-year to an estimated $33.7 billion, compared to an estimated $32.5 billion in 2016. Performance was mixed between sectors and segments but overall there were more gainers than losers in terms of annual sales. 59% of respondents to the annual dealer survey conducted by Arts Economics for this study reported positive year-on-year growth, 13% reported that sales were stable, and 28% indicated a decline in sales. Dealers with sales below $500,000 saw a decline on average of 4%, the second consecutive year of losses in this segment, while the most growth was in the segment above $50 million (up10%).

Auction Figures: Sales at public auction of fine and decorative art and antiques reached $28.5 billion in 2017, up 27% year-on-year. From 2007 to 2017, besides the very lowest end of the market (works sold for less than $1,000), all segments up to $1 million have shown negative annual growth rates and declined in value. In contrast, the market over $1 million has grown, with the biggest increases at the very highest end, with the total value of works sold for over $10 million increasing by 148% over ten years, and by 125% year-on-year in 2017. Sales of Post War and Contemporary art reached a total of $6.2 billion in 2017, increasing 12% year-on-year. The Modern art sector increased 39% to reach $3.6 billion. Values in the Impressionist and Post-Impressionist sector rose 71% to $2.3 billion, while sales in the wider Old Master market reached under $1.3 billion. Sales in the European Old Masters sector rose 64% year-on-year to reach $977 million, exceeding their previous peak of ten years ago in 2007 (at $906 million). However, this uplift was due to the sale of the Leonardo da Vinci painting 'Salvator Mundi' for $450 million at Christie's in the United States, without which sales would have actually fallen 11%. 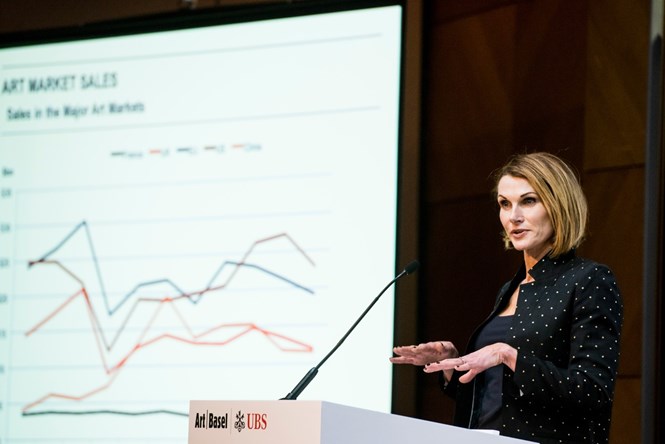 Online Sales: The online art market reached an estimated new high of $5.4 billion in 2017. This represents 8% of the value of global sales – a 10% year-on-year increase, and up 72% over the last five years. Online sales have been a key method to access new buyers, with dealers reported that 45% of their online buyers were new to their businesses in 2017. Auction houses also view online sales as key way to generate new buyers, with 41% of those buying online at second tier auction houses were new buyers, while in top-tier houses they averaged over 40%.

Global Wealth and Art Buyers: In collaboration with UBS and its Chief Investment Office, Clare McAndrew and her team were also able to gather fresh insights on the collecting behavior of US-based high net worth individuals. In 2017, the number of millionaires worldwide reached an historical high of 36.1 million, increasing 7% annually as 2.3 million individuals were added. Millionaire wealth rose by 10% to just under $129 million. The survey of HNWIs in the United States in 2017 revealed that 35% were active in the art and collectibles markets. The survey indicated that the most common price range for buying works was for less than $5,000 (79% of respondents), and 93% reported that they most often bought at prices less than $50,000. Just less than 1% bought at prices in excess of $1 million. 73% of respondents felt that a passion for collecting art or collecting art as an expression of their personality was a key consideration when purchasing works, whereas a minority (32%) thought return on investment was. 86% of collectors surveyed said that they had never sold a work from their collection. While 73% of those surveyed had a professional financial advisor, relatively few used an art advisor (8%).