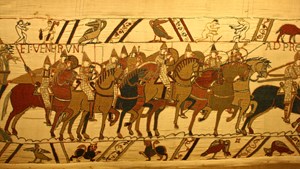 The loan of the famed Bayeux Tapestry by the UK from France may not come to pass after a condition report revealed damage to the artwork. The Museums Journal reports that the 230-foot-long work has been found to be in poor condition, with stains and holes among the issues needing attention and repair.

The Bayeux Tapestry may be an enduring artefact of shared patrimony between England and France, but its planned loan to the UK in 2022 could be cancelled amid claims of its desperate need for repair.

At 70 metres long, the tapestry has been classified as a Historic Monument since 1840, and was entrusted to the city of Bayeux in 1804 by Napoleon Boneparte. The museum housing the tapestry receives more than 400,000 visitors per year, 70% of whom are from outside of France, making it a key tourist site for the Normandy region.

A condition report by The Museum Journal, published in February 2021 has complicated tapestry loan arrangements to the UK, as experts analysing the artefact found its condition to be worse than expected. Restoration of the tapestry was intended to take place in 2024, and its loan to the UK was arranged to coincide with the development of the Bayeux Museum in Normandy, its usual home.

With this new understanding of its fragile condition, movement of the Bayeux Tapestry can only be justified for its repair.

Patrick Gormond, the mayor of Bayeux, said last month that if the UK wanted to secure the loan it should be willing to pay for the €2m restoration cost. In response, Tristram Hunt, V&A director, told the BBC that conserving the work would be a “fabulous” opportunity.

A representative from the V&A told Museums Journal, however, that while the V&A is in close discussions with the Bayeux Museum about how to support the conservation project, it has no current plans to host the tapestry.

French president Emmanuel Macron first announced the tapestry’s loan in January 2018, after previous attempts by Britain to secure it, for the Queen’s coronation in 1953 and the 900th anniversary of the Battle of Hastings in 1966, were rejected.

According to a representative of the Bayeux Museum in Normandy, the sum for the restoration of the tapestry is already expected to be paid by the French Ministry of Culture, with no chance for negotiation with the British Government.

They stated that it is too early to know anything about the eventual loan, but that the Ministry of Culture is commissioning a study to determine how to remove the artefact from its current position, the conditions in which its restoration can be carried out, and its ideal location.

The development of the Bayeux Museum is due to be completed by the spring of 2026, with the restored tapestry in place by the time of its planned reopening. This leaves the window for the loan to take place extremely small, as the tapestry's restoration is still due to begin in 2024.

Despite these restraints, the DCMS stated that discussions regarding the loan are still ongoing, with a representative of the department commenting that “the Bayeux Tapestry is a world treasure and a symbol of the deep ties between Britain and France”.