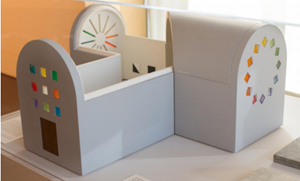 In January 2015, the renowned American artist Ellsworth Kelly gifted to the Blanton Museum of Art the design concept for his most monumental work, a 2,715-square-foot stone building with luminous colored glass windows, a totemic wood sculpture, and fourteen black and white marble panels.

The Blanton Museum of Art at The University of Texas at Austin has completed its $23 million campaign for the construction and fabrication of Ellsworth Kelly's Austin, a monumental, freestanding structure that will open to the public on February 18. "This is a very important moment for the Blanton, our community, and for the arts in Austin," said Blanton Director Simone Wicha. "We were able to realize this singular and monumental work of art for our community--and visitors from around the world--thanks to the donors who generously joined forces to help fund the creation of Ellsworth Kelly's Austin. Passionate Longhorn alumni Jeanne and Mickey Klein, Judy and Charles Tate, and the Blanton family came together early in the project to provide visionary support. They were joined by David Booth and Suzanne Deal Booth of Austin, as well as UT alumni and Kelly collectors from coast to coast."

After Ellsworth Kelly gifted the building design to the Blanton in 2015, the museum began working to realize Austin, one of the artist's last works, and certainly one of his greatest. The 2,715-square-foot stone building has luminous glass windows on three façades. Inside are a wood totem sculpture and black-and-white marble panels featuring signature Kelly shapes. Blanton Museum visitors will be able to enter the work, an experience akin to visiting the Rothko and Matisse chapels, in Houston and Vence, France, respectively. Kelly stated that he conceived the project "without a religious program," and envisioned it as a site for joy and contemplation. It is the first and only building the artist designed.

Austin will open alongside Form into Spirit: Ellsworth Kelly's Austin, a Blanton exhibition that will contextualize the museum's important new addition by telling its story in relation to Kelly's broader career. One section will explore Kelly's use of the color grid, for example. This motif can be seen in Austin’s front façade windows, and in Form into Spirit’s Spectrum IV (1967), a significant painting that will come to the Blanton from New York's Museum of Modern Art. Yet another section will explore Kelly's totems.

The monumental building opens to the public February 18, 2018.