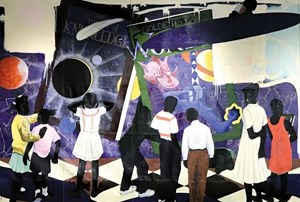 Mayor Rahm Emanuel joined Chicago Public Library (CPL) Commissioner Brian Bannon and Department of Cultural Affairs and Special Events Commissioner (DCASE) Mark Kelly at the Legler Branch Library to announce its transformation into a regional library for the west side. Funding for the transformation of the Legler branch and the public art fund will be supported by the sale of Knowledge & Wonder by renowned artist Kerry James Marshall.

Mayor Rahm Emanuel joined Chicago Public Library (CPL) Commissioner Brian Bannon and Department of Cultural Affairs and Special Events Commissioner (DCASE) Mark Kelly at the Legler Branch Library, located at 115 S. Pulaski, to announce its transformation into a regional library for the west side. The first-ever public art fund will also be established to support public art projects in underserved communities. Funding for the transformation of the Legler branch and the public art fund will be supported by the sale of Knowledge & Wonder by renowned artist Kerry James Marshall. The work, which is currently owned by the City of Chicago, will be sold through auction by Christie’s Auction House.

“Kerry James Marshall is helping not only to write the next chapter in the history of Chicago Public Library, his work will go directly towards supporting the West Side of Chicago,” said Mayor Rahm Emanuel. “With this investment, Legler will become a vital community anchor for families to gather, students to get homework help and job-seekers to connect with life-changing opportunities.”

Capital from the auction of Kerry James Marshall’s Knowledge & Wonder will support significant renovations and program expansions at the 36,000 square foot library, which currently serves the West Garfield Park community. Beginning as early as 2019, the Legler branch will add expanded hours consistent with other regional libraries.

“We’re very excited about this unique opportunity to turn the Legler Branch Library into a 21st century regional library,” said CPL Commissioner Brian Bannon. “Our expanded library services and enhanced spaces will increase accessibility and resources for the entire West Side community.”

Proceeds from the art sale will also be used to bring additional significant public art projects to the Legler Library and the surrounding communities. The established Mayor Emanuel’s Public Art Fund, managed by DCASE, will provide resources to artists and arts and community-based organizations to develop hundreds of future public art projects across the neighborhoods of Chicago.

“While it is a difficult decision to part with an artwork, we see this as an opportunity to initiate new art projects in every corner of this city,” said Mark Kelly, Commissioner for DCASE. “We will make it a priority to produce projects in communities that currently have less access to public art and to engage the youth in their creation and installation.”

Once complete, Legler Regional Library will be a cultural and educational destination for children, youth, families and adults living in all communities on the West Side. Interior and exterior improvements will include the addition of multiple community and study spaces, an increase in collections, new lighting and building systems, accessibility improvements, and parking lot and security enhancements.

“We are proud to have had Kerry James Marshall’s artwork in our community for a long time, and we are so thrilled it will now help us transform a critical neighborhood anchor not only for West Garfield Park, but for the entire West Side community,” said Alderman Jason Ervin, 28th Ward. “This is a proud example of how city officials come together to find innovative ways to positive changes to our city.”

The current early learning play space will be transformed into a brand new children’s library, modeled after the innovative Thomas Hughes Children’s Library, embedding STEM (Science, Technology, Engineering, and Math) into the space, as well as early learning practices. CPL’s early learning model also includes programming to engage caregivers and families with their child’s early literacy and development. Award-winning children’s programs, like Rahm’s Readers Summer Learning Challenge and Teacher in the Library, will continue to serve the community.

The current YOUmedia space for teens will be expanded to include a state-of-the-art sound studio. Legler will also serve as the first CPL location to introduce an “Artist in Residence,” creating a studio space, which will be named in honor of artist Kerry James Marshall where a community artist will develop art projects and host adult, teen and family arts programs.

For adults, Legler Regional Library will have a new Computer Commons on the second floor, collocated with an adult workforce training center. There will also be an adult Maker Space to help cultivate a West Side Maker community. CPL offers the only free maker spaces across the city, with locations currently existing at Harold Washington Library Center and Woodson Regional Library on the south side.

In partnership with the Public Building Commission, CPL will hold a design competition for the interior building renovations.

These library investments are part of the larger “Branching Out: Building Libraries, Building Communities” campaign. Over the past six years, the Library has witnessed one of the largest capital investments in recent history. Through City investment and innovative partnerships, the Library has seen over $200 million of new capital projects and investments in the people and programs that activate community anchors. By the end of 2019, CPL will have 12 new library buildings and 18 additional locations with major renovations and expansions.

Knowledge & Wonder was commissioned in 1995 as part of the Percent for Art program which requires that all construction and renovation of municipal buildings contribute 1.33% of the project cost toward public art on the premises. The work was temporarily moved to the Chicago Cultural Center in 2014 for the exhibition 35 Years of Public Art. Kerry James Marshall is a MacArthur Fellow and deeply accomplished artist, whose work is known for referencing African American culture and history in paintings, murals, collage, drawings and even comic books. He has received solo exhibitions throughout Europe and North America, including the 2016 retrospective Mastry at the Museum of Contemporary Art in Chicago.

Legler branch is currently a landmark building and is named for Henry Legler, CPL’s director from 1909-1917. Legler is credited with the aggressive expansion of library services in the early 20th Century due to his “Library Plan for the Whole City,” which called for five regional libraries and 70 local branch libraries. The goal of the plan was to bring “library service within the walking distance of home for every person in Chicago who can read or wants to use books.”