The fall of the Berlin Wall 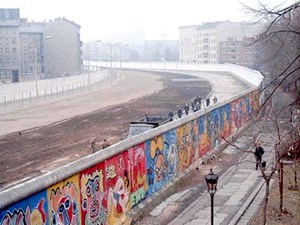 This November, 25 years ago, the Berlin wall has fallen down. Artdependence wants to share some images of the wall dressed in graffiti.

This November, 25 years ago, the Berlin wall has fallen down.  Artdependence wants to share some images of the wall dressed in graffiti.

The Berlin Wall was constructed in 1961 to separate Germany and Berlin during the Cold War. The wall was on the "death strip". All the differences between the countries made it a perfect place for people to express their opinions, especially on their preferences and dislikes. In the 1980s, the wall was reconstructed and made 14 feet tall. Graffiting on the wall became popular for artists from all over the world and a place where tourists would go and admire the artwork. The West Berlin side of the wall had artwork completely covering the wall, while the East Berlin side was kept blank; as people were not permitted to get close enough to the eastside of the wall to paint anything.

The Berlin Wall was the largest canvas in the world. Unfortunately, much of the artwork was not claimed by artists and remains anonymous. Because the wall was open to everyone, there were no restrictions on what artists could put on the wall. Over the past 30 years since the collection of artwork was started, much of the controversial artwork has been removed from the wall. Almost all of the wall has been removed and it only exists in places such as Potsdamer Platz, Mühlenstrasse, and Bernauer Strasse. Painting had been prohibited on the east side of the wall during the Cold War, so not a lot of new art has been added since the 1990s. (Wikipedia)