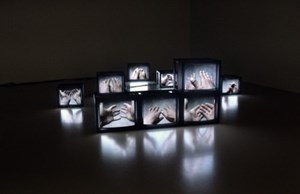 The Philadelphia Museum of Art has announced a number of new acquisitions that will significantly enrich its collection. Among the works that have been recently acquired are: a group of contemporary films and videos and Japanese ink paintings mounted as handscrolls, hanging scrolls, and folding screens.

The Philadelphia Museum of Art has announced a number of new acquisitions that will significantly enrich its collection. Among the works that have been recently acquired are: a group of contemporary films and videos; Japanese ink paintings mounted as handscrolls, hanging scrolls, and folding screens; nine pieces of early American furniture that illuminate the artistic achievements of cabinetmakers in colonial New England and Pennsylvania; and a major work in stained glass dating to the 1520s commissioned for a church in Paris. These works have come to the Museum variously as gifts, promised gifts, and purchases. Some will be placed on view in the galleries in the coming weeks.

In recent years the Museum has placed an increasing emphasis on acquiring works of time-based media. This effort has been substantially aided by the recent gifts of Philadelphia collectors Peter and Mari Shaw. Their donation of ten works ranges from single-channel projections to multi-monitor installations created by a number of prominent mid-career artists including Fikret Atay (Turkish, b. 1974); Elaine Byrne (Irish, b. 1970); Marepe (Brazilian, b. 1970); Christopher Miner (American, b. 1973); Melik Ohanian (French, b. 1969); John Pilson (American, b. 1968); Anri Sala (Albanian, b. 1974); Matthew Suib (American, b. 1973); and Italo Zuffi (Italian, b. 1969). Among the highlights is Promises, 2001 by Sala, who represented France at the 55th Venice Biennale in 2013. Another key work is Ohanian’s The Hand, 2002, an installation comprising nine monitors—some isolated, others stacked or grouped—placed in a kind of conversation, each featuring images of different sets of hands inspired by striking workers in Paris. Seven of the gifts from the Shaws are the first works by these artists to enter the Museum’s collection, which has also been augmented by the recently announced joint purchase, with the Pinault Collection, of two major recent works by Bruce Nauman: Contrapposto Studies, I through VII, 2015/2016, consisting of seven large-scale video projections with sound, and Walks In Walks Out, 2015, a closely related work comprising a single-channel video with sound, currently on view.