The Summer Opening of Buckingham Palace 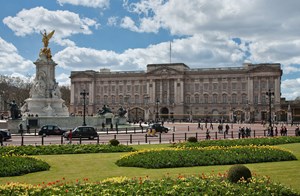 The Summer Opening of Buckingham Palace is 22 July - 1 October 2017. Royal Gifts, the special exhibition at the Summer Opening of the Palace in 2017, will tell the story of The Queen’s reign through a wide-ranging display of official gifts presented to Her Majesty during the past 65 years.

Buckingham Palace is the working headquarters of the Monarchy, where The Queen carries out her official and ceremonial duties as Head of State of the United Kingdom and Head of the Commonwealth.

The Queen and The Duke of Edinburgh live in the private apartments on the north side of the Palace, while rooms on the upper floors of the north and east sides are occupied by other members of the Royal Family. Much of the ground floor and the south wing of the Palace are used by Household staff. The principal State Rooms used for court ceremonies and official entertaining occupy the main west block facing the gardens.

Over 50,000 people visit the Palace each year as guests at occasions of all sizes, from small lunches to large-scale receptions. Some receptions have a theme, such as ‘The British Clothing Industry’, ‘Women in Business’ or ‘Maritime Britain’. At other times, the guests may be a successful sporting team or Commonwealth teams who are competing in the UK. The Queen’s Garden Parties are held three times each summer and are attended by roughly 30,000 guests.

The highpoint of royal entertaining at Buckingham Palace today is the State Banquet, given by The Queen in the Ballroom on the evening of the first day of a State Visit of a foreign Head of State to the United Kingdom. The Ballroom is specially decorated for the occasion with flowers from the royal gardens and plate and porcelain from the Royal Collection.

Royal Gifts, the special exhibition at the Summer Opening of the Palace in 2017, will tell the story of The Queen’s reign through a wide-ranging display of official gifts presented to Her Majesty during the past 65 years. With gifts representing every continent, including those from world leaders such as former US President Dwight D. Eisenhower, former South African President Nelson Mandela and President Xi Jinping of the People’s Republic of China, the exhibition will present a spectacular display of craftsmanship from across the globe.

Image above: The principal façade of Buckingham Palace, the East Front, was originally constructed by Edward Blore and completed in 1850. It was remodelled by Sir Aston Webb in 1913. @Diliff, source Wikipedia