The theatre of history Lubaina Himid shows in Oxford and Bristol 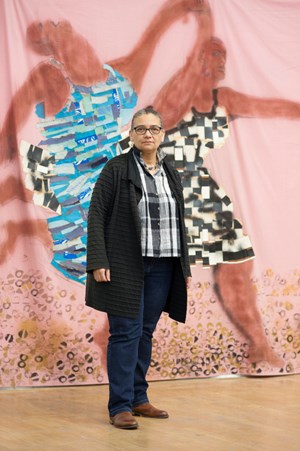 As an emancipated white male, writing this as Trump takes office, it can only feel that we white males are wrecking everything. Minutes after swearing in, the new US president was telling the motley crowds on Capitol Hill that migrants or foreign nations will have no part in his vision for America’s future. Now he is planning his wall. In the UK, our own government’s liking for foreigners does not even extend to our cross-channel neighbours. And so, unless you are a writer, an artist or perhaps a footballer, it is no time to be a migrant.

As an emancipated white male, writing this as Trump takes office, it can only feel that we white males are wrecking everything. Minutes after swearing in, the new US president was telling the motley crowds on Capitol Hill that migrants or foreign nations will have no part in his vision for America’s future. Now he is planning his wall. In the UK, our own government’s liking for foreigners does not even extend to our cross-channel neighbours.

And so, unless you are a writer, an artist or perhaps a footballer, it is no time to be a migrant. The prevailing wind is with entitled non-migrants such as myself. However, a pair of new visual art shows at Modern Art Oxford and Spike Island in Bristol is concerned with this hegemony.

Some of the specific concerns of Zanzibar-born Lubaina Himid, and her curators in Oxford and Bristol, are race, racism, slavery and servitude. Invisible Strategies, in the former city, examines power relations beyond its cloistered college walls. Navigation Charts, in the latter city, tells the stories of the people who worked on the plantations which once made Bristol rich. Her subjects here are neither elite academics nor sugar magnates; they are those of African descent, and her paintings, found ceramics and sculptural objects are resplendent with colour.

A former student of theatre design, Himid makes set-like paintings with enigmatic narratives. She is not a realist, but a storyteller whose tale remains somewhat hidden. In Oxford we find some hybrid painting/sculptures which, again suggest scenery, and again offer limited access to the audience. It falls to the viewer to dig a little. You would never know, for example, about the many slaves tossed into the deep after an illness made the live cargo on a slave ship blind. No one would know, were it not for a ledger which turned up in an insurance office. A faux-naive painting here, named after the boat, conveys sadness and mystery rather than drama and anger.

But it turns out that newspapers are no better at telling stories than some paintings. Himid takes the Guardian, and finds that stories about black celebrities tend to dwell on stereotypically black personality attributes. Tennis player Venus Williams is dehumanised by comparisons to a snake (She plays with venom); a boxer or a footballer are accused of black magic. The artist, however, does not redact or merely emphasise the offending language; she paints around the margins in colourful acrylic: snakes, knives, patterned fabric, all serve to dramatise these news reports to the point of absurdity.

Bristol is where Himid’s two pronged post-colonialism gathers pace: one hundred two-dimensional, life-sized and beautifully-painted figures have been slid into horizontal plinths as if puppets, ready to be pushed or pulled onto the artist’s stage. A viewer can get lost in their maze-like configuration. While a soundtrack personalises each character in turn. Each has an African name, and a Western name; each has a former occupation, and a new servile occupation. Above all each comes forward with a statement of defiant optimism. One feels that, in the long run, on this teeming planet of ours, this gentle army might one day prevail.

The piece is Naming the Money and is rarely seen. The viewer is struck by both the scale and the complexity of this installation. The ‘money’ here are no identi-kit line up but, essentially, a crowd of individuals who retain life’s pleasures despite their straitened circumstances. Though indentured to unfamiliar roles far from home, they keep possession of elements that money cannot buy: air, sky, clay, musical notes and so on. To wander this piece, is to encounter these servants or slaves one by one, on a personal level and to feel anger, admiration, horror or remorse, depending on one’s level of privilege. And if the secret to great art really is the forgiveness of sins, as poet W.B. Yeats suggested, then even middle class art writers are let off the hook by this appealing cast of the approachable and the oppressed.

Also in Bristol, Himid arranges vertical struts of painted timber to echo the hull of a boat. Together they carry designs that encompass African carvings, Korean textiles and a clear stream of water from vase to cup. This feat of waitering or waitressing is a light tough and together the planks make an attractive spectacle. But of course in this setting we cannot get romantic about any amount of seafaring. The piece is called Drowned Orchard and we are reminded once again of the lives that were lost on the Middle Passage. So many, it has been said, that opportunist sharks would follow the many slave ships from the West Coast of Africa to the New World.

Himid herself is from East Africa, from Zanzibar in the Indian Ocean. After her father’s premature death, she migrated to the UK with her mother and did not return to the ancestral home until well into adulthood. This return trip has inspired a series of large abstract paintings in which stepped cubes emerge from a watery background. If the sea which surrounds the island of her birth is a source of sorrow to the artist, it is also a source of poetry in these well-toned paintings which do conjure up warm seas and empty beaches, whether or not you come from or have even been to Zanzibar.

In summation, I love these shows by Lubaina Himid, but draw as much guilt as strength from them. Browsing her doctored pages from the Guardian, I was reminded of an early moment in my career as a junior creative writing copy for the a sports brand. A directive from the brand manager stated that whenever we featured a certain black player, he must appear with a beaming smile on his face. This was never a stipulation for his white colleagues. I was too callow to raise a serious objection. So while I can enjoy this exhibition’s beauty and intelligence, and share its triumph, it also serves as a warning about the complicities one might be culpable of in the new world disorder.