"There will definitely be hidden treasures..." - interview with Elisabeth Sherman, The Whitney Museum of American Art 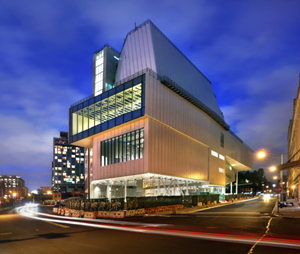 This time we will be talking to Elisabeth Sherman, a Senior Curatorial Assistant at the Whitney Museum of American Art, about the museum’s collection, new building, inaugural exhibition and, of course, about Elisabeth Sherman’s favourite artworks.

The Whitney Museum of American Art, also known as ‘the Whitney’ - is a New York City based art museum focusing on 20th and 21st century American art. Founded by Gertrude Vanderbilt Whitney in 1931, the museum showed living American artists whose work was disregarded by the traditional institutions. Up until the present day, the Whitney still follows this noble path with utmost pride. Its permanent collection comprises more than 21,000 pieces by more than 300 artists. In 2015 the Whitney will move to a new building, which will open a new page in its development. This time we will be talking to Elisabeth Sherman, a Senior Curatorial Assistant at the Whitney Museum of American Art, about the museum’s collection, moving to a new building, the inaugural exhibition and, of course, about  Elisabeth Sherman’s favourite artworks.

Artdependence Magazine: The new Whitney will be open to the public on May 1, 2015. Designed by architect Renzo Piano, the new building will considerably increase the size of Whitney’s exhibition and programming space. What will be the main difference between the old venue and the new one?

AD: Renzo Piano was also the architect of the Pompidou Centre in Paris. The Whitney has had strong connection with Centre Pompidou in Paris due to the donation made by Thea Westreich Wagner and Ethan Wagner in 2012. Is this a historical bond between the two institutions?

ES: The fact that Renzo Piano is the architect of both buildings is simply coincidental. Of course, we have a fantastic relationship with the Pompidou Centre as we do with many of our peer institutions both in the United States and worldwide. But this is not a specific historical relationship. We have mounted exhibitions at the Pompidou in the past, including the Alexander Calder: The Paris Years exhibition and our Jeff Koons exhibition, which opened there on November 26. Again we consider them great colleagues and enjoy our collaborations but we do not have a historical relationship with them more than with any other institution. 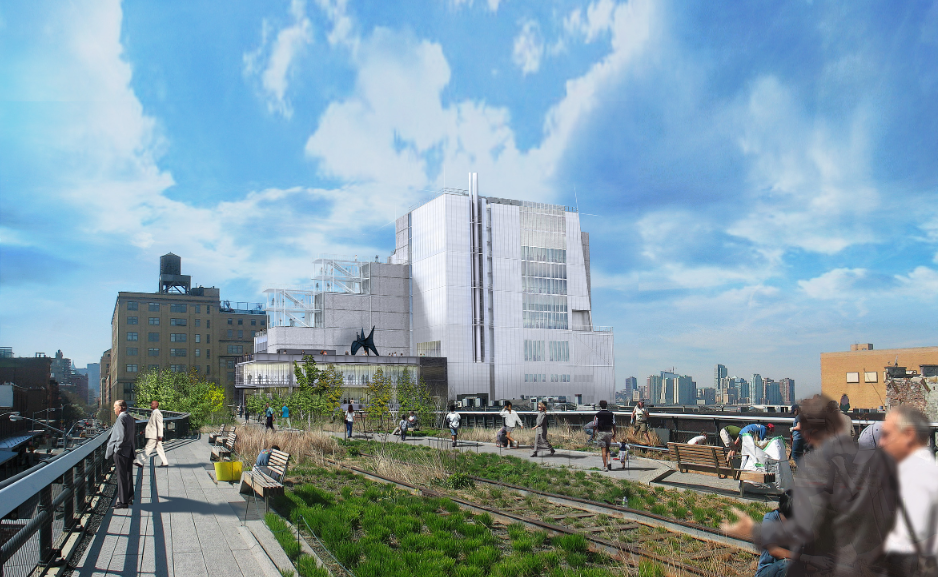 AD: In 1914, Mrs. Whitney established the Whitney Studio in Greenwich Village, where she presented exhibitions by living American artists whose work had been disregarded by the traditional academies. Does the Whitney still follow this path?

ES: Absolutely. The Whitney still follows this path and the legacy of Gertrude Vanderbilt Whitney is important to us. The world has changed dramatically in the last century, however, and perceptions of American art have changed along with it. Given the fact that the American art is no longer marginalised in the way than it was then we don’t face the same challenges that she did, but we remain dedicated to living artists. This is really the core of our mission.

AD: What is the main focus of the Museum’s collection now? Are there a lot of works by non-American artists? 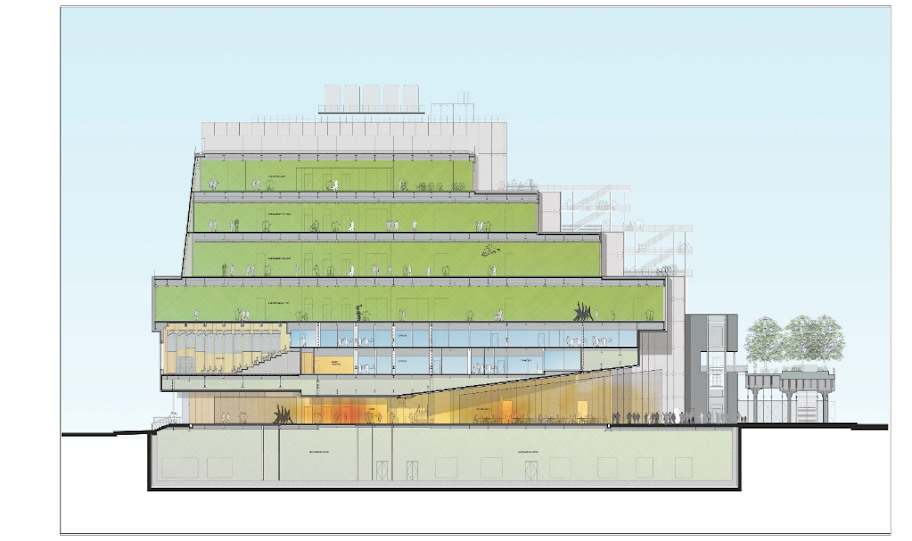 AD: What can we expect from the inaugural exhibition in Spring 2015? While preparing this exhibition since 2012, did you find any hidden treasures among the 21,000 works in the museum's collection? Will there be any surprises for the guests?

ES: Yes, it's going to be very exciting.  Visitors can expect to see more of our collection on view at any one time than ever before. There will definitely be hidden treasures and hopefully there will be many unexpected surprises. Simply having this new space to present the collection and to be able to really look at the full scope of our history is going to be very exciting. Needless to say, we will never be able to show the museum’s entire collection at once, but there will be many great things on view for the first time and we cannot wait for everyone to see them.

AD: The Whitney has a fantastic online collection, featuring videos and texts about its artworks. In a way you are offering a lot for free. What is the idea behind it?

ES: We feel very dedicated to being a public institution. We serve the public and this means that the people who live in or who visit New York City, as well as the public further away, either in this country or around the world. Thus, our content is really meant to bring our collection, programming and educational opportunities to visitors worldwide, who may not be able to come to the museum ever or frequently and we are very proud of giving everyone a chance to see our collection. It is also intended to supplement and enhance the experience of seeing the work in person, in the galleries, and provide additional educational opportunities before, after, or during the museum visit. We hope that our online content is applicable to a wide range of ages and demographic categories. Video content is something that is increasingly important in our day and ours is intended for a variety of audiences. 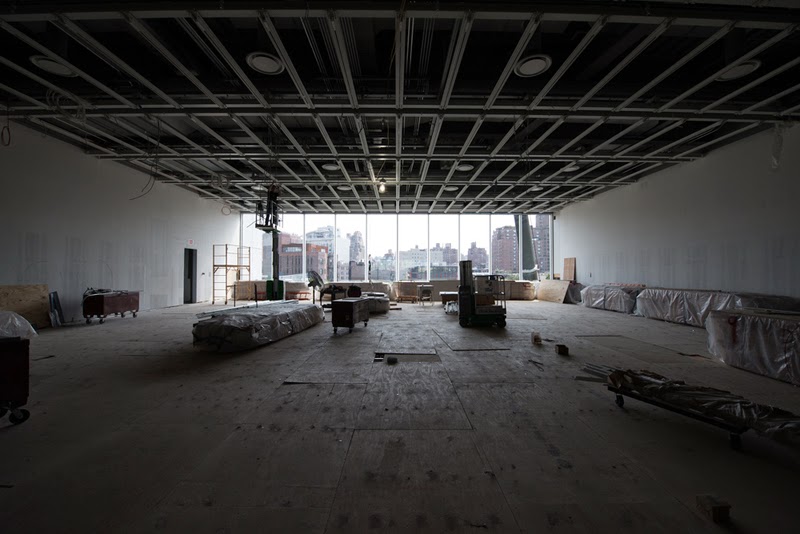 AD: Please tell us about your personal experience of working in one of the main Museums in the United States – The Whitney Museum of American Art.

ES: It has been a continuously incredible experience. The museum is unique for its scale and size relative to its ambitions. It is fantastic to be a part of this team in addition to working on such exciting projects like the retrospective of Paul Thek.  I have also been involved in the last two Whitney Biennials, in 2012 and 2014. Seeing how the entire institution galvanizes around the Biennial and supports the new work of living artists is incredibly exciting. And it is an invaluable, once in a lifetime experience, to be a part of launching the next chapter of the Whitney in our new building.

AD: How long have you been working in the Whitney Museum?

ES: These are both key works in our collection and having them together is important and interesting. Sherrie Levine’s sculpture directly refers to, and recreates, the billiard tables in Man Ray’s painting. She’s challenging the idea of original authorship, and to have both this important painting and the work it inspired in our collection makes each work even more complex than it would be on its own. Of course, these are fundamental works by important artists of their generations. 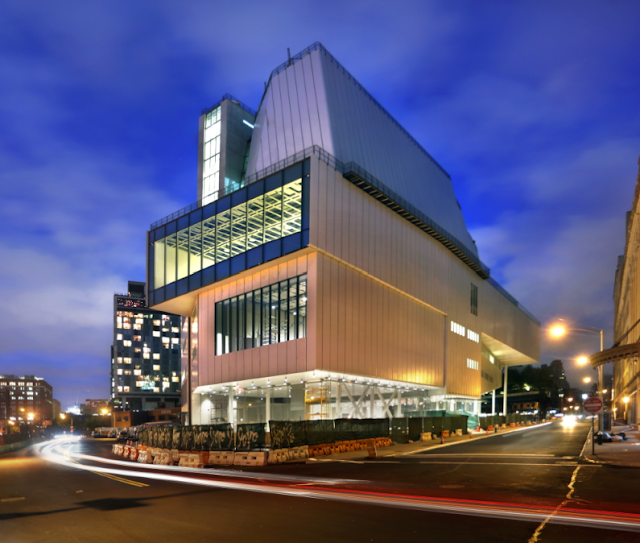 View from West Side highway, September 2014. Photograph by Ed Lederman

AD: Can you name one of your favourite artworks in the public collection you would like to highlight.

ES: I have chosen ‘Watching the Clock’ by Kay Sage (1958) from MoMA’s collection. Kay Sage was an American surrealist. She was unusual both in that she was a woman in the very male dominated movement and an American in a very European movement. She is well known as wife of Yves Tanguy, who was a phenomenal painter, but her works are very interesting as well. ‘Watching the Clock’ is one of her last paintings. She died about 5 years later but stopped painting towards the end of her life. She was in a deep depression and made several attempts to commit suicide. In many ways the painting is often read biographically, since it has two actual bullet holes in it. Yet, even without knowing her personal story, the combination of the trompe l’oeil affect in the painting which is pierced by the actual rips from the bullets makes it a complex and challenging painting.  It is a very powerful and violent work, a very strong gesture.  Sage is an artist who is often overlooked, but I have always been really struck by her work, and this painting in particular, every time I see it.

AD: Thank you, dear Elisabeth! We wish you success and a great opening in May!

More about The Whitney Museum of American Art is here.