This Headline Has Already Been Written: Walid Raad on Walkthrough at ICA Boston 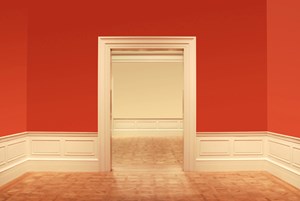 Fiction, non-fiction, photography, video, data visualization, stage sets, scale models, performance—it all blurs together as if it's one seamless medium at the Walid Raad retrospective, on view from February 24 — May 30, 2016 at Boston's Institute of Contemporary Art. Artdependence spoke with Raad a few moments after his first performance of Walkthrough at the ICA Boston, while he was still recovering from the frenetic, nearly hour-long monologue, capturing just a few of his thoughts about the integration of the performance into the main themes of the installation: the trauma (physical, psychological and intellectual) of the Lebanese civil wars of 1975–1990, and the pace of the development of commercial contemporary art infrastructures within the Arab world.

Fiction, non-fiction, photography, video, data visualization, stage sets, scale models, performance—it all blurs together as if it's one seamless medium at the Walid Raad retrospective, on view from February 24 — May 30, 2016 at Boston's Institute of Contemporary Art.

But it's the 55 minute-long performance of Walkthrough, guiding visitors into, around, out of and straight through Raad's ongoing (since 2007) work Scratching on things I could disavow that creates this effect—this illusion of coherence.

The information distilled into Raad's art more generally and in the retrospective—which also features works from The Atlas Group (1989–2004)—specifically, is far from seamless. If anything, it's a series of portraits of seams, seen from different angles and perspectives, examined as closely as possible and then quickly stepped away from in an effort to catch a glimpse of rifts hidden by artful stitching.

The performance itself is heroic in scope. It covers massive vistas of conceptual ground, brings the audience into the frame, and literally leaps—like a game piece that has just acquired a special power—whenever it finds itself backed into a corner. Walkthrough/Scratching on things I could disavow is also narratively genre-bending: calling it real-time non-fictional magical realism gives you just the barest hint of how to orient yourself to best follow the twists and turns of Raad's flight through language, color, place, shape and historical time.

Artdependence spoke with Raad a few moments after his first performance of Walkthrough at the ICA Boston, while he was still recovering from the frenetic, nearly hour-long monologue, capturing just a few of his thoughts about the integration of the performance into the main themes of the installation: the trauma (physical, psychological and intellectual) of the Lebanese civil wars of 1975–1990, and the pace of the development of commercial contemporary art infrastructures within the Arab world.

Artdependence Magazine: It's a lot of work, when you add the performance into the picture of what you're doing with this show.

Walid Raad: Yes. The presentations are a central part of the exhibition, even if I have to be present here several days a month.

AD: It feels like you've developed a new narrative form by choosing to move people and ideas through the different installation spaces that you've created. Can you talk a little bit about why you structured things in this way? Why you made the choice to draw people into a multi-dimensional, performative experience, where they are somewhat forced to problematize things as a group?

WR: Apart from the increased presence of performance itself in the museum, I don't think that this format is foreign to the museum experience.  Docent tours have been around for a while as have Artists’ Talks and scholarly presentations. My presentation leans on such forms. 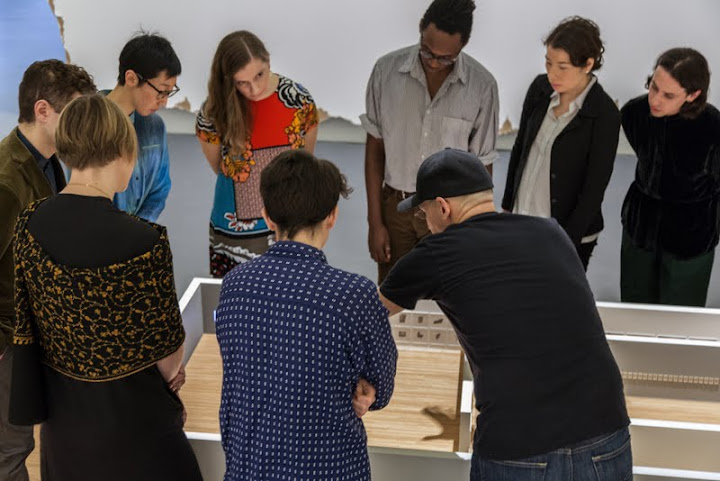 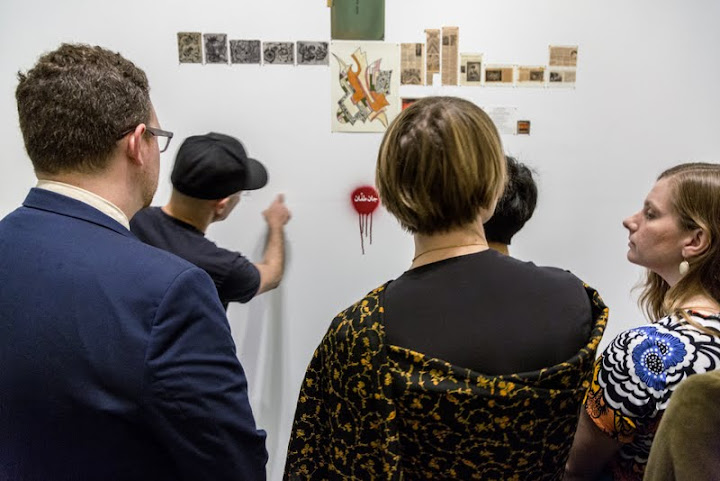 AD: But it's not the adding of elements from those things together. There's something new happening. It feels more like you're exploiting the expected conventions of those formats to get at something different.

WR: I think that we can agree that museum spaces function differently than movie theaters or academic settings.  Each space permits and hinders some ways to move, see, hear, think and feel. For example, in a theater, you sit in a chair, surrounded by others.  To leave in the middle of the play or movie, you have to think about whether you want to disturb your neighbors or not.  When video is displayed in a museum, the seating experience is quite uncomfortable, if present at all.  One tends to view from afar, at an angle, or in motion.  With this presentation, I wanted to create a stage that you are invited to enter and exit at a specific time.  I wanted the group attending to be small enough.  I wanted to be  able to look at almost everyone there in the eye.  And the photographs, sculptures, videos presented are somewhere between a prop and an artwork.  In a way, I wanted to take from the screening room, the theater but also from the museum what I tend to find generative in terms of viewing, listening, sensing experiences.  And given the content of the presentation itself, and as I already mentioned, it was equally important for me to be able to look at you in the eyes. At certain moments in the presentation, it is quite clear that the audience will not believe what I am saying, but seeing me move and speak the way I do makes a different kind of plea.

AD: Why is staging a walkthrough of a museum exhibition the best format for addressing the themes that you're most interested in?

WR: My palette of associations is shaped by the visual arts, and more precisely photography. I am most at ease with photographic materials, techniques, forms and discourses. But most of my projects have always had three forms: Publication, presentation, exhibition.  And each form permits me to think and form some quite distinct things. 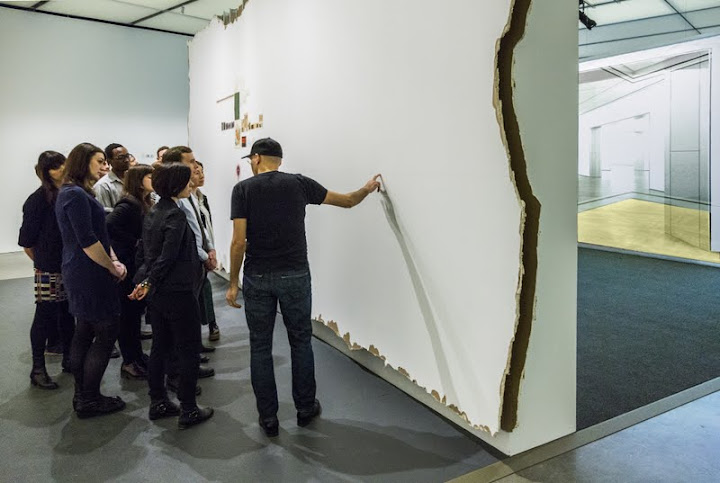 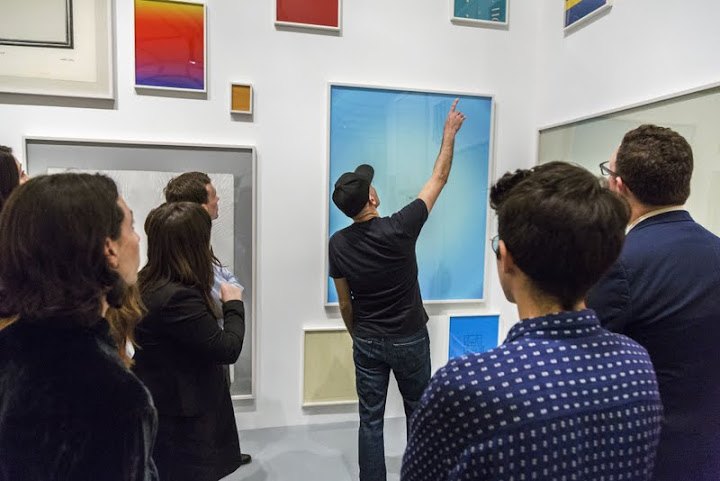 AD: Can you talk a little bit about how you balance the visual, performative and textual when in the creation phase of your work?

WR: I am always making the artworks first. I find myself making images, sounds, volumes, gestures, and without necessarily knowing exactly why or where they fit in the overall project. Over time, some things become clear and others less so. And many a time, the work’s meanings change for me over time. Today, I have a very different rapport to many works from The Atlas Group (1989-2004) than I did in the early nineties. In fact, sometimes I am surprised that I was not attentive to certain things that were present in those works all along. 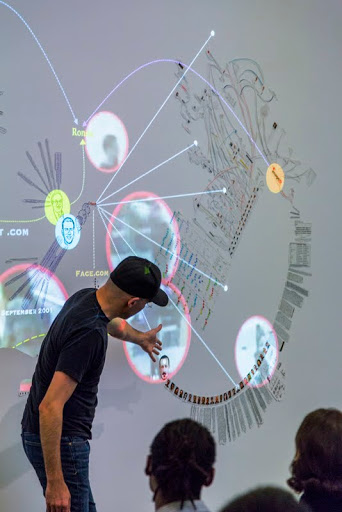 AD: I've noticed that you will be participating in a forum that the museum is hosting later in the month featuring Andrew Ross, and focused on labor practices in the Arab states of the Persian Gulf. So my final question is about where your work as an artist ends and your work as an activist—especially in the context of your involvement with the Gulf Labor Artist Coalition—begins.

WR: I approach my artworks and my work with the Gulf Labor Coalition from my position as an artist, but in the sense that there are things that one does as an artist but not as an artwork or in an artwork. For example, the Gulf Labor Coalition “leverages” the high visibility of some artists working with us in order to achieve some things that would have been more difficult otherwise. But I'm also very conscious that there are matters related to our work on labor in the Gulf  that are quite difficult, and even less productive for us to address in or through artworks. I'm conscious of the difference between what I do as an artist with Gulf Labor, versus what I do as an artist through an artwork. Activism and art sometimes—most of the time—have different internal and external rhythms, frictions and tempos that one must attend to.

AD: Although I see in both your art practice and your activism, you're dealing very explicitly with the displacement of violence...

WR: I have yet to find a way to address the issues that come up with Gulf Labor—to address them through an artwork. But I wouldn't be surprised if it did some day.

By Heather Kapplow
Heather Kapplow is an American writer, media producer and artist, with a strong interest in performance/engagement art and experimental film and writing practices. Her academic training is in Discourse Studies (BA, University of Massachusetts) and in Social Science (MA, University of Chicago) with a focus on Sociolinguistics and Anthropology of Museums. She has written about art for Hyperallergic, WBUR (National Public Radio), WGBH (National Public Radio & Television), Big Red & Shiny Magazine, The Boston Globe's BDCWire, and Transgender Tapestry. She also writes scripts for museum audio tours and about food and music from time to time. In the past she has worked as a producer in the American Public Broadcasting system; as a film and academic researcher; and in various programming and documenting positions at non-profit arts organizations.