Timothy Rub, Director of The Museum of Art Announces Plans to Retire 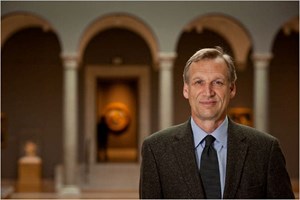 Timothy Rub, the George D. Widener director and chief executive officer at the Philadelphia Museum of Art, announced that he plans to retire in early 2022 after 13 years of service.

Timothy Rub, the George D. Widener director and chief executive officer at the Philadelphia Museum of Art, announced that he plans to retire in early 2022 after 13 years of service. Rub, who will turn 70 in early March, has led the museum since September 2009.

During his tenure, the museum has undergone a significant transformation. A major phase of the Facilities Master Plan designed by Frank Gehry, the “Core Project,” was completed in late spring 2021 after a decade of planning and four years of construction. Hailed as a thoughtful and nuanced response to the architectural character of the museum’s landmark main building, the Core Project represents the largest increase in public and gallery space to this facility since it was opened to the public in 1928. Rub also initiated several other capital improvements, among them the renovation of the Rodin Museum and its gardens, that have significantly improved the presentation of the museum’s permanent collections and enhanced the experience of its visitors.

Rub led the development of a new strategic plan for the museum in 2013, focusing on several critically important goals: engaging new audiences both onsite and online through innovative exhibitions and programs; activating the museum’s world-renowned collection through new installations, publications and digital initiatives; enhancing the visitor experience through improvements to the museum’s facilities; and strengthening its commitment to civic engagement. During his tenure, visitorship has become much younger and more diverse, a trend that is expected to resume as the city recovers from the global pandemic, and the museum significantly developed its collections; expanded educational programming, especially for families; prioritized community engagement; and made significant advances in scholarship and conservation.

The board of trustees will immediately initiate an international search for Rub’s successor. To ensure a smooth transition, after stepping down at the end of January, Rub will continue to serve the institution on a consulting basis until the museum’s next director is in place. He will also serve as co-curator for the upcoming exhibition “Sean Scully: The Shape of Ideas,” when it opens at the museum next April.