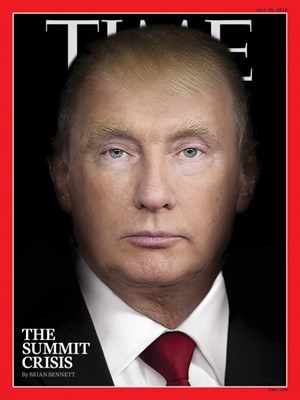 The artist behind the cover, Nancy Burson, said she hopes it causes readers to reflect on the similarities between the two leaders.

In a story explaining the cover, the editors said the merged image represents the conflict between the question of alleged collusion with Russia and the question of whether Russia attempted to influence the 2016 presidential election. TIME’s Brian Bennett writes in the cover story that the president is unable or unwilling to make a distinction between these two questions.

The artist behind the cover, Nancy Burson, said she hopes it causes readers to reflect on the similarities between the two leaders. “What my work has always been about is allowing people to see differently,” she adds. “The combining of faces is a different way for people to see what they couldn’t see before.” Burson is known for her facial composite work, including the development of a technique to help the FBI find missing children by aging their faces.