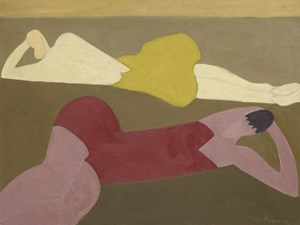 Painted in 1950, Two Figures on Beach belongs to a remarkably innovative and productive period of Milton Avery’s celebrated career. In the present work, Avery reinvents the traditional art historical motif of the reclining female form through his distinctive and thoroughly modern vision. With their bodies positioned closely together, the two women are depicted relaxing outdoors in a scene that emanates leisure and tranquility. Although the primary elements of the composition are instantly recognizable, Avery deconstructs both the figurative and landscape components into simplified passages of color. He maintains a flattened pictorial plane, suggesting illusionistic recession through the relationship between colors and the inclusion of a horizon line in the upper register. Within this compressed space, the reduced elements of the composition exude a striking sense of harmony and balance, illustrating Avery’s ability to interpret a representational domestic scene as a complex arrangement of color and form. 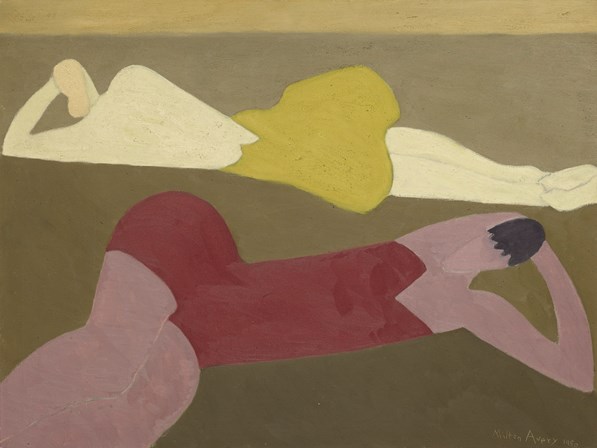 Two Figures on the Beach (1950) by Milton Avery

Two Figures on Beach exemplifies the distinctive blend of realism and abstraction that defines Avery’s most admired aesthetic. This mature, semi-abstracted style emerged in the 1940s, soon after he left the dealer Valentine Dudensig to join Paul Rosenberg at his illustrious New York gallery. Encouraged by Rosenberg, Avery intensified his earlier experiments with the application of non-associative color and simplification of form. Barbara Haskell discusses these influences, noting that “Rosenberg's proclivity for taut structure and architectonic solidity encouraged Avery to emphasize these aspects of his work. He replaced the brushy paint application and graphic detailing that had informed his previous efforts with denser more evenly modulated areas of flattened color contained with crisply delineated forms. The result was a more abstract interlocking of shapes and a shallower pictorial space than he had previously employed. Avery retained color as the primary vehicle of feeling and expression, but achieved a greater degree of abstraction by increasing the parity between recognizable forms and abstract shapes” (“Milton Avery: The Metaphysics of Color,” Milton Avery: Paintings from the Collection of the Neuberger Museum of Art, Purchase, New York, 1994, pp. 8-9). While he continued to work representationally, Avery abandoned many conventional pictorial devices and instead employed color to indicate depth and space. Avery pushed these visual explorations further in the 1950s, omitting nearly all extraneous detail in his subject matter.

“I do not use linear perspective,” Avery remarked, “but achieve depth by color—the function of one color with another. I strip the design to the essentials; the facts do not interest me as much as the essence of nature” (as quoted in Robert Hobbs, Milton Avery: The Late Paintings, New York, 2001, p. 51). Through this process of simplification, Avery eliminates facial details entirely. Of this formal reduction, art historian Robert Hobbs observes, “...in his quest for purity of formal means and the essence of expression, facial features became too dominant as focal points and too illustrative, thus interrupting the viewer’s understanding of an entire composition as the embodiment of a mood expressed in terms of the medium of paint” (Milton Avery, New York, 1990, p. 129).

These considerations demonstrate the influence of European Fauvists Henri Matisse (Fig. 1) and André Derain (Fig. 2), who similarly reduced distinctive facial features in search of an essential formal universality, as exemplified in Matisse's Plum Blossoms, Ochre Background of 1948 (The Museum of Modern Art, New York). When asked to explain his simplification of the human form, Matisse answered, “Because the expression is carried by the whole picture...If you put in eyes, nose, mouth, it doesn’t serve for much; on the contrary, doing so paralyzes the imagination of the spectator and obliges him to see a specific person, a certain resemblance...” (as quoted in “Interview with Georges Charbonnier,” in Jack Flam, ed., Matisse on Art, Los Angeles, California, 1995, p. 194). While Matisse aimed for true anonymity, Avery’s abstracted figures in Two Figures on Beach retain a strong sense of individuality. As Hobbs notes, “What is surprising is the degree to which intimacy is joined with anonymity in his art: the figures are distinct personalities even though their faces are blank” (Milton Avery, New York, 1990, p. 130). Indeed Avery stated, “I like to seize the one sharp instant in nature, to imprison it by means of ordered shapes and space relationships. To this end I eliminate and simplify, leaving apparently nothing but color and pattern. I am not seeking pure abstraction; rather, the purity and essence of the idea—expressed in its simplest form” (as quoted in Milton Avery: The Late Paintings, New York, 2001, p. 53).

In its reductive palette of tonal color, Two Figures on Beach presages the works of such iconic painters as Adolph Gottlieb, Mark Rothko (Fig. 3) and the proponents of the Color Field movement, who would go on to push his innovative ideas fully into the non-objective. Today, Avery is considered among the earliest American practitioners of chromatic abstraction. In a commemorative essay addressing the impact of Avery’s influential body of work, Rothko concluded, “There have been several others in our generation who have celebrated the world around them, but none with that inevitability where the poetry penetrated every pore of the canvas to the very last touch of the brush. For Avery was a great poet-inventor who had invented sonorities never seen nor heard before. From these we have learned much and will learn more for a long time to come” (as quoted in Adelyn Dohme Breeskin, Milton Avery, Washington, D.C., 1969, n.p.).