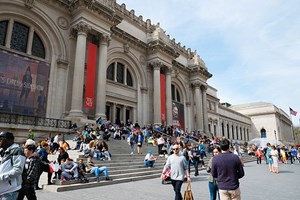 The American Alliance of Museums (AAM), the only organization representing the entire scope of the museum community, released two groundbreaking reports revealing indisputable evidence that museums contribute more to the United States economy than previously thought and have widespread public support that transcends political affiliations and geographic locations.

The American Alliance of Museums (AAM), the only organization representing the entire scope of the museum community, released two groundbreaking reports revealing indisputable evidence that museums contribute more to the United States economy than previously thought and have widespread public support that transcends political affiliations and geographic locations.

Armed with the two new reports and a wealth of data, on February 27 hundreds of museum professionals will visit with members of Congress and their staff to ask them to support funding for vital federal agencies and tax incentives for charitable donations. The Fiscal Year 2019 budget proposal announced by President Trump yesterday calls for the elimination of multiple agencies that support the arts and humanities.

The first study, Museums as Economic Engines, reveals that museums support 726,000 jobs in the United States, and directly employ 372,100 people, more than double that of the professional sports industry, according to the Bureau of Labor Statistics. The study, conducted by Oxford Economics with the support of the Andrew W. Mellon Foundation, shows that for every $100 of economic activity created by museums, an additional $220 is created in other sectors of the US economy as a result of supply chain and employee expenditure impacts. These impacts mean that museums contribute approximately $50 billion to the US economy each year, a number that’s more than twice previous estimates.

The report is also the first to show that US museums generate more than $12 billion per year in tax revenue to federal, state, and local governments. The museum field’s largest economic impact is on the leisure and hospitality industry (approximately $17 billion), but it also generates approximately $12 billion in the financial activities sector and approximately $3 billion each in the education/health services and manufacturing sectors.

The second report, Museums & Public Opinion, examines the opinions of Americans concerning museums, their educational and economic value, as well as their thoughts about federal funding and support for museums in their community. Conducted jointly by AAM and Wilkening Consulting, the study was fielded by the market research experts at Ipsos and polled more than 2,000 Americans. The survey results overwhelmingly demonstrate the high degree to which Americans believe in and support their museums, regardless of political affiliation, geographic location, and whether they visit museums or not:

“The data speaks clearly: whether urban or rural, conservative or liberal, or a museum-goer or not, Americans treasure the museums in their communities and want elected officials to support them,” Lott said.

Image on top: The Metropolitan Museum of Art ©Kai Pilger