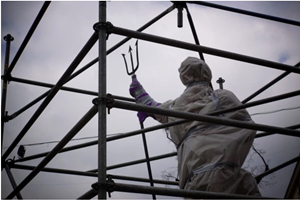 As of 9 May, UNESCO has verified damage to 127 sites since 24 February – 54 religious sites, 11 museums, 26 historic buildings, 14 buildings dedicated to cultural activities, 15 monuments, 7 libraries.

As of 9 May, UNESCO has verified damage to 127 sites since 24 February – 54 religious sites, 11 museums, 26 historic buildings, 14 buildings dedicated to cultural activities, 15 monuments, 7 libraries:

UNESCO is conducting a preliminary damage assessment for cultural properties* by cross-checking the reported incidents with multiple credible sources. These published data which will be regularly updated do not commit the Organization. UNESCO is also developing, with its partner organizations, a mechanism for independent coordinated assessment of data in Ukraine, including satellite image analysis, in line with provisions of the 1954 Hague Convention for the Protection of Cultural Property in the Event of Armed Conflict.

*The term “cultural property” refers to immovable cultural property as defined under Article 1 of the 1954 Hague Convention, irrespective of its origin, ownership or status of registration in the national inventory, and facilities and monuments dedicated to culture, including memorials.