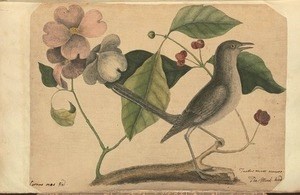 An export bar has been placed on a group of 18th century albums containing what experts claim are amongst the finest examples of botanical drawing in existence. The works, ‘The Natural History of Carolina, Florida and the Bahama Islands’ and ‘A Commonplace Book’ are valued at £2,500,000 and were completed in the mid 1700s. They are at risk of being lost abroad unless a UK buyer can be found.

Image: from Mark Catesby, The Natural History of Carolina, Florida, and the Bahama Islands (2 volumes) and William Bartram and others, A Commonplace Book

An export bar has been placed on a group of 18th century albums containing what experts claim are amongst the finest examples of botanical drawing in existence.

The works, ‘The Natural History of Carolina, Florida and the Bahama Islands’ and ‘A Commonplace Book’ are valued at £2,500,000 and were completed in the mid 1700s. They are at risk of being lost abroad unless a UK buyer can be found.

The two volumes of Mark Catesby’s ‘The Natural History of Carolina, Florida and the Bahama Islands’ are a first edition set published in 1731 and 1743 . They were owned by Peter Collinson and contain printed text and hand-coloured etched plates, depicting indigenous plants, birds and animals. Unique to this edition, the high-quality illustrations include an additional frontispiece, illustrations and watercolours by William Bartram and Georg Ehret - the most renowned botanical watercolourist of his time. Catesby presented these volumes to Peter Collinson, a critical figure in British natural history, in gratitude for his support. 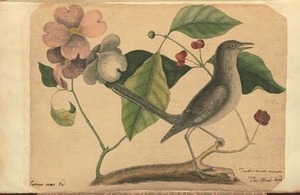 from Mark Catesby, The Natural History of Carolina, Florida, and the Bahama Islands (2 volumes) and William Bartram and others, A Commonplace Book

Another volume also at risk of export is Peter Collinson’s own ‘Commonplace Book’ which includes 75 original drawings and prints by Catesby, William Bartram, Georg Ehret, and the ‘father of British ornithology’ George Edwards. The work includes exceptional early depictions of botanical and zoological subjects from across the globe, some of which were in the collection of Sir Hans Sloane and later formed the basis of the collections of the British Museum.

The group of works are of immense significance for the understanding of British culture at the time, including contemporary approaches to the history of science and horticulture, and collecting, illustrating and recording the natural world.

The intricate drawings in this collection offer us a special insight into how new discoveries and images of plants and animals in far off lands were shared before the advent of modern technology.

This collection is a hugely important resource for future generations and I hope that a buyer can be found so these works can be saved for the nation.

The Minister’s decision follows the advice of the Reviewing Committee on the Export of Works of Art and Objects of Cultural Interest (RCEWA). The RCEWA made its recommendation on the grounds of the collection’s historical importance and outstanding significance for the study of the history of science and the natural world in 18th century Britain.

The Committee noted that the fact that the volumes have remained together since Collinson’s ownership of them, says much about their remarkable historical importance and the way in which they document a period of huge expansion in global knowledge and understanding.

Peter Collinson was a key member of the circle around Sir Hans Sloane the founder of the British Museum, British Library and Natural History Museum. He was himself a figure of European importance and the patron of Mark Catesby, whose Natural History was the most important work of natural history produced in early eighteenth-century Britain.

This is Collinson’s own presentation copy and has additional watercolour drawings by some of the most distinguished botanical artists of the time as well as proof states of some of Catesby’s prints. Further watercolours in Collinson’s commonplace book complement and enhance the importance of the printed volumes. They constitute the defining icons of the group of people responsible for some of the greatest and most enduring cultural achievements of British civilisation. Among the later enthusiasts for botany and zoology who owned the volumes was Edward Lear’s first and most important patron.

The volumes have not previously been easily accessible for research. Retention in this country could lead further light to be shed on relationships within Sir Hans Sloane’s circle.

The decision on the export licence application for the albums will be deferred until 16 April 2020. This may be extended until 16 August 2020 if a serious intention to raise funds to purchase it is made at the recommended price of £2,500,000 .