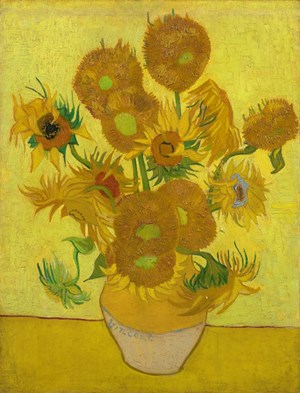 Detailed international research underscores fragile condition of famous painting. Axel Rüger, Director of the Van Gogh Museum: ‘This is why we have decided that Sunflowers will no longer travel away from the museum. From now on, this highlight of our collection will stay at home in Amsterdam, available for all of our visitors to see every day of the year’.

Research conducted at the Van Gogh Museum into Vincent van Gogh’s famous Sunflowers has produced a great deal of new information regarding the condition of the painting and the materials that Van Gogh used. One of the conclusions is that the painting is stable, but fragile. Axel Rüger, Director of the Van Gogh Museum: ‘This is why we have decided that Sunflowers will no longer travel away from the museum. From now on, this highlight of our collection will stay at home in Amsterdam, available for all of our visitors to see every day of the year’.

Sunflowers has been in the museum’s conservation studio since 11 January while minor conservation treatment is carried out. This is the final phase of comprehensive research into the condition of the painting. An international team of specialists studied Sunflowers in Amsterdam using the latest techniques, in order to gather as much information as possible about the canvas, the layers of ground and paint, and the earlier restorations carried out on the work. The aim was to ascertain which materials Van Gogh used, what the condition of the painting is, whether restoration is required and possible, and what can be done to preserve the painting for future generations in the best possible manner. 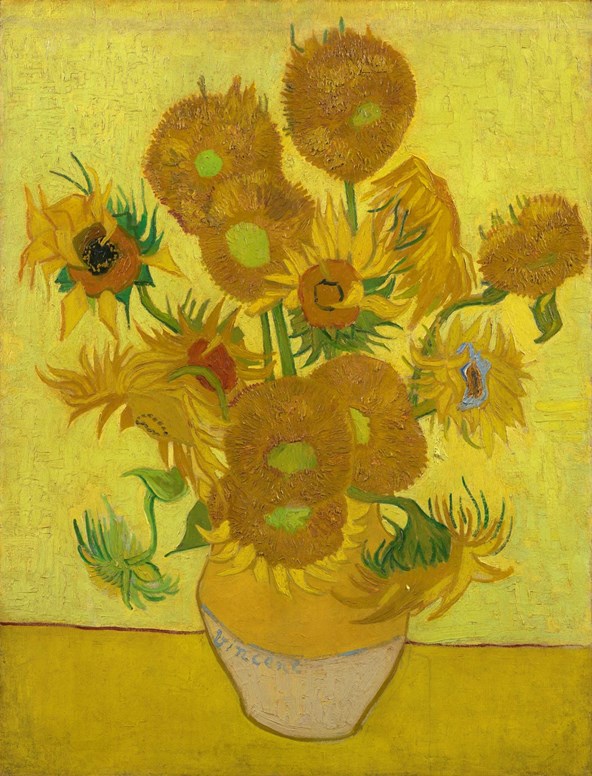 The research has established the current condition of the painting and what, 130 years after the work was created, needs to be done to preserve it for future generations. Rüger: ‘One notable conclusion of the research is that the layers of ground and paint are stable, but very sensitive to vibrations and changes in humidity and temperature. It is therefore important that the painting is moved about as little as possible, and that it is displayed in a stable climate. In order to avoid any risk whatsoever, we have decided that Sunflowers will no longer travel’. The masterpiece was already only very rarely loaned out – only six times in the museum’s 46-year history. The last time was in 2014, when the painting travelled to The National Gallery in London to go on display alongside the version of Sunflowers from that collection. The two versions had previously been on display at the Van Gogh Museum.

The research began in 2016, headed by former senior conservator Ella Hendriks (now Professor of Conservation and Restoration of Cultural Heritage at the University of Amsterdam), in collaboration with experts from the universities of Antwerp, Perugia and Toruń (Poland) and the Cultural Heritage Agency of the Netherlands. Sunflowers was examined using the latest research techniques, meaning that the painting no longer had to travel to be investigated. Instead, mobile devices were brought from all around to study the painting on-site at the museum. The research has resulted in a more complete and better understanding of how the painting was created and its current condition. 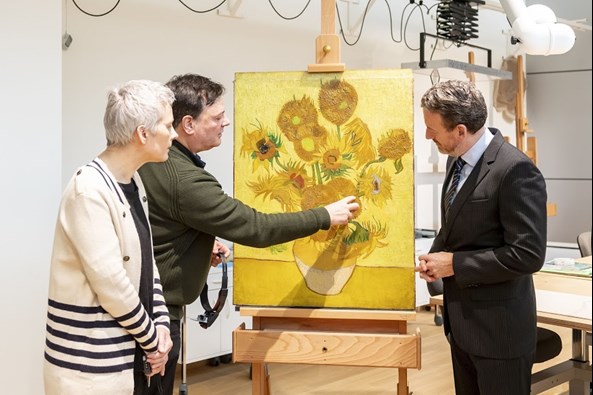 Axel Rüger, Director of the Van Gogh Museum, announces in the museum’s conservation studio together with restorers Ella Hendriks and René Boitelle that 'Sunflowers' will no longer travel due to the fragile condition. The painting will stay at home in Amsterdam, from now on.

Five versions, added wooden strip and origin of the canvas

Sunflowers is one of Vincent van Gogh’s best-known paintings. He painted five versions of a large bunch of sunflowers in a vase, which are now on display at museums all around the world. The work at the Van Gogh Museum dates to January 1889 and is based on the painting from the summer of 1888 that is now at The National Gallery in London. The recent study confirms this fact, as the arrangement of the composition of the painting at the Van Gogh Museum shows that the artist knew in advance exactly how the final work was to look. The research also confirms that the wooden strip, painted yellow and fixed to the top of the canvas, is an original extension of the composition – hence added by Van Gogh himself during the painting process. Computer analysis of the fabric pattern enables us to trace the origin of the canvas upon which Sunflowers is painted back to a particular roll of linen, and tells us which other paintings were produced on pieces of canvas that Van Gogh cut from the same roll.

The research has yielded comprehensive information regarding the colours and blends of colours that Van Gogh used and the natural ageing process of the paint. Some of the original colour nuances have been partly lost due to the effects of discolouration. Ella Hendriks: ‘We now know that the colour changes in Sunflowers are mainly caused by a certain type of red paint (geranium lake) fading and a certain type of yellow paint (chrome yellow) darkening’. These insights have helped to further refine lighting standards at the museum: the maximum permitted level of lighting has already been reduced by two thirds, from 150 to 50 lux. New LED light bulbs with relatively low emissions in the violet-blue-green part of the light spectrum have also been installed.

Ella Hendriks: ‘We have also gained much greater insight into the various restorations carried out on the work, and the consequences of these restorations. There are multiple layers of varnish on the painting, all of which were added at a later date, hence not by Van Gogh himself. These layers of varnish are dirty and yellowed, but cannot be removed because in some places, the layers of paint and varnish have mixed. A layer of wax was later added on top of the layer of varnish at some places, to secure the paint and make the surface more matt’. During the current treatment, this layer of wax, which was added in the late 1990s and has gained a matt, whitish quality over the years, will be removed. Several discoloured retouches from an earlier restoration will also be examined. These old retouches are under the layer of varnish and therefore cannot be removed, so new retouches will be added on top of the old ones.

On Friday 22 February, Sunflowers will go back on display at its familiar location at the Van Gogh Museum in Amsterdam. This coming summer, the painting will take centre stage in the exhibition Van Gogh and the Sunflowers (on display from 21 June to 1 September 2019), which introduces the recent research and conservation treatment.