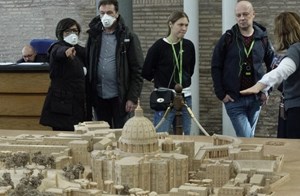 The Vatican has instituted new measures and closures to help curb the spread of the coronavirus. In addition to urging employees to work from home if possible and providing family leave for workers with minors at home due to school closures, Pope Francis also was making some events - normally held outdoors with large crowds - closed to visitors, filmed indoors and broadcast online.

The Vatican has instituted new measures and closures to help curb the spread of the coronavirus.

In addition to urging employees to work from home if possible and providing family leave for workers with minors at home due to school closures, Pope Francis also was making some events - normally held outdoors with large crowds - closed to visitors, filmed indoors and broadcast online. 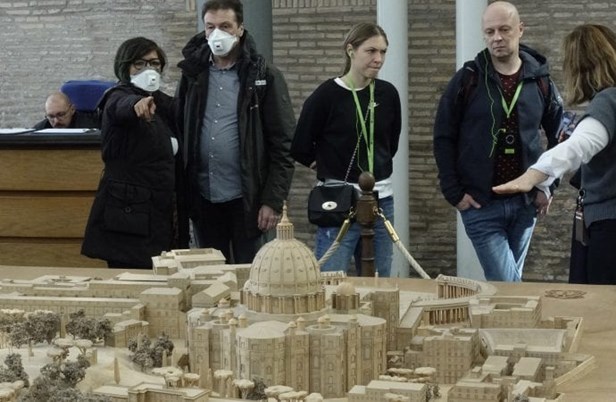 People wearing masks for protection from the coronavirus look at a model of the Vatican at the Vatican Museums Feb. 29, 2020, file photo. The Vatican announced March 8 that the Vatican Museums will be closed until April 3 as a precaution against spread of the coronavirus. Also closed for the same duration are the necropolis under St. Peter’s Basilica, museums at the pontifical villa at Castel Gandolfo, and the museums of the papal basilicas. (Credit: Paul Haring/CNS.)

The pope’s Wednesday general audience March 11, like the March 8 Sunday Angelus, was to be livestreamed on Vatican News and YouTube “to avoid the risk of spreading the COVID-19 (coronavirus),” especially given the crowding that occurs at the security checkpoints on entering the square, the Vatican announced March 7.

The Vatican also said that until March 15, the pope’s morning Masses at his residence would not be open to visitors but would be shown in their entirety online.

The Italian government and Vatican City State health services have asked people throughout Italy to avoid large gatherings, particularly indoors, and to keep a yard’s distance between people in public in the hopes of slowing the spread of the virus.

In fact, in photos of the pope’s private audience March 9 with nearly 30 bishops from France, who were in Rome on their “ad limina” visits, the prelates were seated far apart from one another and from the pope, and the audience was held in a large marbled hall of the apostolic palace, rather than the smaller, carpeted papal library.

Following the lead of the Italian government, the Vatican also announced March 8 that the Vatican Museums, the necropolis under St. Peter’s Basilica and the museum at the papal villa at Castel Gandolfo would be closed until April 3 to do its part in reducing attractions that normally draw a large number of international visitors to closed and crowded places.

The beefed-up measures were made public after the Vatican reported March 6 that its health clinic was temporarily closed to disinfect the area after a person using the clinic tested positive for the coronavirus.

Matteo Bruni, director of the Vatican press office, said in a communique March 8 that the unnamed individual had gone to the clinic as part of a pre-employment medical examination and that five people who had been in close contact with him had been quarantined as a precautionary measure.

The person was not a Vatican resident or employee, but he had attended a major conference at the end of February sponsored by the Pontifical Academy for Life. The academy issued a press release March 6 saying it had alerted all those who took part in the conference on ethics and artificial intelligence. The pope had not attended.

Based on precautions and protocols consistent with Italian government health standards, the Vatican issued a large number of recommendations and measures for all offices and entities that are part of the Roman Curia, the Holy See and Vatican City State. The Vatican released copies of the provisions March 8.

In addition to all previous health protocols already issued, the Vatican health and hygiene department recommended people: not congregate in common areas; avoid using elevators unless physically impaired; stay a yard apart from others in closed areas; frequently disinfect areas and objects; avoid having outside visitors; notify management in case of travel to high-risk areas; and contact medical professionals by telephone if displaying flu-like symptoms.

The Vatican also urged those in charge of Vatican offices to consider the impact emergency measures were having on employees and to consider offering their staff the following options where appropriate or possible: avoid having staff work overtime or calling in volunteers or outside help; suspend hiring new personnel unless absolutely necessary; promote flexibility in scheduling for employees who have children so they can spend more time with their families; promote working from home for employees where possible; allow extra family leave provisions for employees who request it and have children under the age of 14 and need supervision because of nationwide school closures.