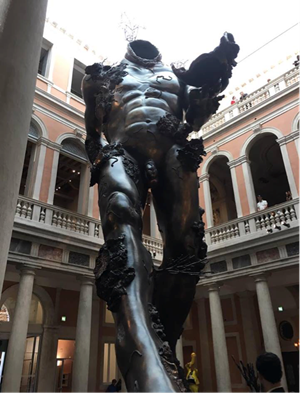 The 57th edition of Biennale, titled VIVA ARTE VIVA and curated by Christine Macel, chief curator at the Centre Pompidou in Paris, opened its doors to the public on the 13th of May. The first Biennale took place in 1895; it was an initiative of the Venetian mayor Riccardo Selvatico. Today, it is one of the most important events in the art world internationally.

The 57th edition of Biennale, titled VIVA ARTE VIVA and curated by Christine Macel, chief curator at the Centre Pompidou in Paris, opened its doors to the public on the 13th of May. The first Biennale took place in 1895; it was an initiative of the Venetian mayor Riccardo Selvatico. Today, it is one of the most important events in the art world internationally.

This year, instead of adopting a single theme, as it usually does, the Biennale is putting the artists at the forefront. As curator Christine Macel states ‘it is a Biennale designed with artists, by artists and for artists’. VIVA ARTE VIVA is also focusing on young and lesser-known artists (over 100 of the 120 artists selected have never displayed at the Biennale’s main exhibition before), who either passed away too soon or are still mostly unknown to the broader public, despite the importance of their work.

In addition, the main exhibition of this year Biennale’s, offers visitors a journey through nine Trans-Pavilions, two in the Central Pavilion and seven across the Arsenale through the Giardino delle Vergini. Each one of these pavilions has a name, such as Pavilion of Joys and Fears, Pavilion of Time and Infinity, and Pavilion of the Earth, and there is ‘no physical separation between them, as the intention was to flow together like the chapter of a book’, going beyond national limits and the classic organization of the Biennale into national pavilions, mixing artists of all generations and origins.

Just a couple of works in the Central Pavilion that I would like to mention are firstly the work of Olafur Eliasson in collaboration with Thyssen-Bornemisza Art Contemporary, and his artistic workshop “Green light”. The artist, as always, mixes art with architecture and design, and invites visitors and refugees to take part, making their own geometric lambs, based on elements created by him and provided to the participants. All the lambs created at the workshop are on sale in order to raise money for two NGOs.

Moreover, the work of Senga Nengudi is also interesting, making sculptures from nylon stockings. The inspiration of this work goes back to 1974 when the artist was pregnant and discovered stockings as a means to address matters like the elasticity of the female body, its transformation during pregnancy, and the way it’s viewed by society.

Going to the exhibiting part of Arsenale, the work of Brazilian artist Ernesto Neto invites the visitors to enter a polyamide structure, which is full of pillows and leaves, adopting the form of “Cupixawa”, a place for social meetings and spiritual ceremonies of the Huni Kuin Indians of the state of Acre in the Amazonian forest. So, visitors are welcome to discuss, socialize, get rid of bad energy, meditate, or simply rest, developing a deeper connection with the nature.

Another work in the Arsenale that will capture your attention immediately is the giant colourful bales of fiber that are placed on the ground and cover an entire wall by Sheila Hicks.  The work is named “bâoli”; in India, it is a place where people meet and socialize.

In general, this year at the Biennale you will find a lot of works made by felt, knitting and other kinds of textile.

The video installation “The Tyranny of Consciousness” by Charles Atlas is a combination of sunsets, New York’s famous drag queen, Lady Bunny, talking about her life and politics, and a huge digital clock ‘which counts down from 18n minutes to zero’, the time that is needed for the sun to set.

Charles Atlas, “The Tyranny of Consciousness”. Photo by Martina Rimoldi.

One more interesting three-channel video is “David” by Guan Xiao. The video is referring to the homonym sculpture of the Renaissance master Michelangelo, showcasing the commercialization and the celebrity dimension of the statue nowadays, accompanied by a song, performed by the artist.

Continuing with national pavilions in Giardini, the pavilion of Germany - winner of the Golden Lion this year for best participation - is a must-see. Indeed, Anne Imhof’s work is, once more, innovative and intense, as it uses hard realism to address issues of our modern society, such as our dependence on technology. Faust is a five-hour production per day and a seven-month scenario. Actually, Anne Imhof texts the performers while the performance goes on in order to let them know what she wants them to do next. Doberman pinschers are also present in the performance; this is not the first time that she includes animals in her performances.

This year, the Belgian pavilion - which was the first foreign pavilion in Giadini in 1907 - is represented by artist Dirk Braeckman and curated by Eva Wittocx, whose work was selected by a jury from a shortlist of five. The artist and the curator choose simplicity, in contrast with the majority of the pavilions, because they want visitors to concentrate just on looking Dirk Braeckman’s photographs, as the original purpose of photography.

Greek participation is noteworthy as well, with a narrative video installation, titled “Laboratory of Dilemmas” and inspired by Aeschylus’ Suppliant Woman. The artist, George Drivas, together with the curator, Orestis Andreadakis, are addressing timeless dilemmas, leaving visitors free to decide the answers to them.

Moving to Arsenale, South Africa’s pavilion stands out, with the works of two African artists Candice Breitz and Mohau Modisakeng - two originally distinct works that come together for the sake of Biennale. The installation addresses one of the biggest issues of today’s world, forced immigration, using cleverly Hollywood stars as expedient for this purpose.

The Italian pavilion presents the impressive work of three Italian artists, Giorgio Andreotta Calò, Roberto Cuoghi, and Adelita Husni-Bey, curated by Cecilia Alemani. The pavilion borrows its title, “Il mondo magico”, by a study of anthropologist Ernesto di Martino, published in 1948, and presents magic, spirituality and imagination, as means not for escaping this world, but rather for living in this world with all its abundance and variety.

More pavilions can be found in various spots in the city. I will just mention the Icelandic and the Tunisian pavilions. The first one is by far the craziest pavilion of Biennale, located in the Spazio Punch art space at the island of Giudecca, where visual and performance artist Egill Sæbjörnsson gave the pavilion over to two giant nosed trolls. Their names are Ūgh and Bõögâr and they are out of control in Venice. Ūgh and Bõögâr love drinking coffee and eating human beings. For sure, this is going to draw your attention and make you have a good time.

Tunisia is present at the Venice Biennale for the first time since 1958, with three different locations across the city. “The Absence of paths” focuses on migration and freedom of movement, and how these values are threatened nowadays by populist nationalistic movements.

In general, immigration, human and woman’s rights, and other similar topics, are often present at this year’s Biennale.

Parallel to the art Biennale, there also numerous exhibitions across the city. Of course, Damien Hirst’s exhibition is one of them. The exhibition is divided into two places, Punta della Dogana and Palazzo Grassi, both properties of François Pinault –one of the most important art collectors in modern times and owner of Christie’s auction house. The exhibition titled “Treasures from the Wreck of the Unbelievable” required ten years of preparation and millions of dollars in funding. The opinions for this exhibition are quite contradictory and it’s either loved or hated by the audience.

The Peggy Guggenheim Collection is always a good choice when you are visiting Venice. This year is rather special for the museum since its director, Philip Rylands, is leaving after 17 years. In these years the PGC has become the most visited museum of modern art in Italy, and the second most visited museum in Venice (after the Doge's Palace). In addition to the permanent collection, you can also enjoy a retrospective exhibition of Mark Tobey, titled “Threading Light”, which corresponds perfectly with the museum’s tradition of bringing to Venice American artists whose work is insufficient known to the Italian public, as well as a smaller exhibition of Danish surrealist artist Rita Kernn-Larsen.

Another remarkable exhibition in the city is taking place in Ca’ Corner della Regina, a magnificent palazzo on the Canal Grande, where Fondazione Prada has its base. The exhibition “The Boat is Leaking. The Captain Lied" got its title from a song of Leonard Cohen and is a collaboration of the writer and filmmaker Alexander Kluge, the photographer Thomas Demand, and the stage and costume designer Anna Viebrock. With an experimental and alternative approach, the exhibition is a “shared awareness of the critical aspects of present times and the complexity of the world we live in”, as the curator Udo Kittelmann underlines.

Lastly, we should note The pavilion of Humanity, located in a Venetian home right by the Academia bridge. The collaborative exhibition “Objection” by two female artists, Michal Cole and Ekin Onat, is undoubtedly powerful, dealing with women's rights and freedom of speech around the world. “Top Gun” is one of the best rooms of “Objection”, exclusively made with 25,000 men’s ties, including celebrities’ ties, such as a tie of Donald Trump