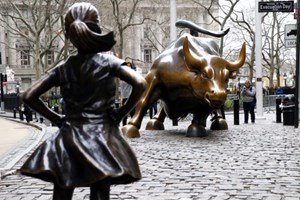 Fearless Girl—the controversial statue that has been facing down New York’s famed Wall Street Bull since 2017—is traveling to Ireland next month in time for the country’s first Climate Week. The sculpture will be on view November 6–8 at Dublin Castle before moving to the New York Stock Exchange.

Fearless Girl—the controversial statue that has been facing down New York’s famed Wall Street Bull since 2017—is traveling to Ireland next month in time for the country’s first Climate Week. The sculpture will be on view November 6–8 at Dublin Castle before moving to the New York Stock Exchange.

What was originally hailed as a feminist symbol soured for many when it was revealed that the statue, created by artist Kristen Visbal, was actually commissioned for an ad campaign. The financial firm State Street Global Advisors worked with advertising company McCann New York to create the work to promote its Gender Diversity Index SHE, an exchange-traded fund for women-led companies.

“We’re proud of the role[[Fearless Girl]has played in sparking the conversation around women in leadership and workplace gender diversity,” Ann Prendergast, head of State Street Global Advisors Ireland, told the Independent Ireland. “We are delighted she is coming to Dublin to support Climate Week events.”

According to the London Times, Sustainable Nation Ireland chief executive Stephen Nolan hopes that the statue will underscore the importance of preserving the planet for future generations, and of the challenges we face in stemming the effects of climate change. The summit will focus on energy efficiency, sustainable business, and responsible investing. 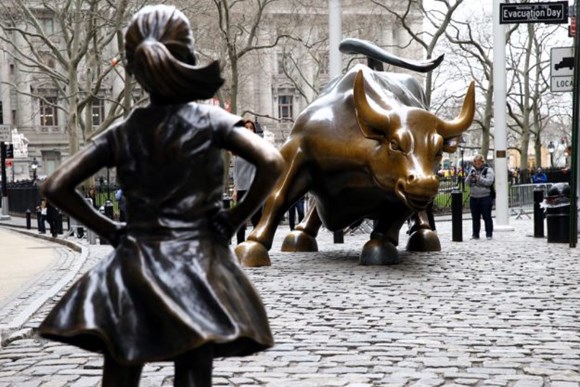 Fearless Girl became an instant Instagram sensation when it was installed in New York for International Women’s Day in 2017. Mayor Bill de Blasio quickly extended the sculpture’s week-long permit for a year and, bowing to public demand, announced in February that the piece would become a permanent fixture.

This didn’t please Arturo Di Modica, the artist who created Charging Bull. The statue was intended to embody the resilience of the American people in the wake of the 1987 recession, he has said, but the presence of the defiant girl recasts it as a symbol of patriarchal capitalist greed. In contrast to Fearless Girl‘s corporate origins, Charging Bull was installed, guerrilla style, in front of the New York Stock Exchange in 1989. The police impounded it before the city ultimately embraced it.

Di Modica has accused Fearless Girl of violating his copyright, using his work to create an advertisement. Bowling Green Association chairman Arthur Piccolo, who helped secure Charging Bull its permanent home, has led the fight against Fearless Girl with a spirited email campaign.

“ENJOY YOUR TRIP AD GIRL,” he wrote in a jubilant email upon hearing of the statue’s impending journey. “BOWLING GREEN WILL BE FREE AGAIN just as it was the first time when the British left Bowling Green on Evacuation Day November 25, 1783.” 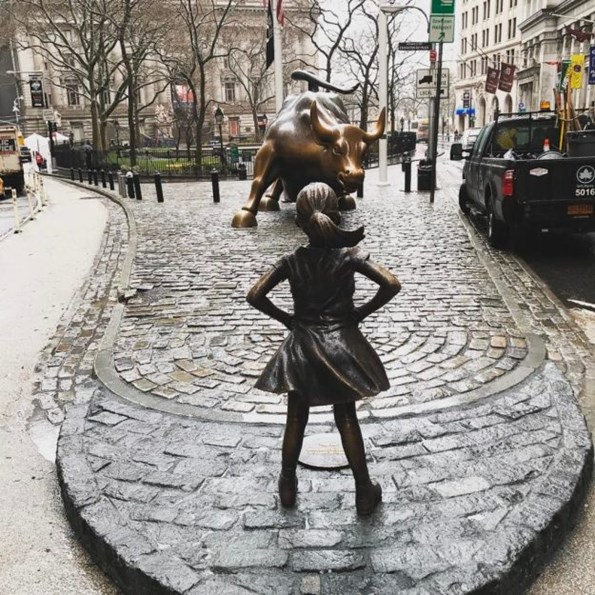 Piccolo has pointed out hypocrisy in State Street’s creation of Fearless Girl. At the time of its initial installation, women accounted for only 18 percent of the company’s leadership. Meanwhile, parent company State Street Corporation paid a $5 million settlement in a lawsuit from allegedly underpaying women and employees of color.

Last week State Street issued a report asserting that Fearless Girl has inspired 300 companies to hire female directors as part of its gender diversity asset stewardship programs in the US, UK, Australia, Japan, Canada, and continental Europe. According to State Street, the percentage of companies in the Russell 3000 Index without female directors has dropped from 24 to 16 percent since the end of 2016.

“Since her arrival, Fearless Girl has inspired companies and shareholders worldwide to focus on board diversity and join us in our call to action,” said State Street Global Advisors head of ESG Investments and asset stewardship Rakhi Jumar in a statement. “We commend the companies that have already placed women on their boards in response to our outreach, and the others that have committed to doing so.”