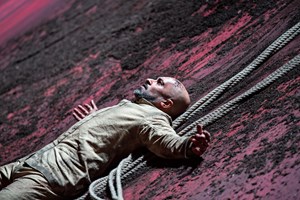 Influential rasping live music accompanies beautiful, soft and strong movements that are grand, clear and emphasised, allowing one to reflect upon the fragility of human being and its immense cruelty.

Xenos, a greek word meaning host or stranger is the title of the last piece to be performed by Akram Kahn.

Two indian musicians are singing and playing seated on the dais's floor creating a welcoming and surrounding sound while the spectators take their place.

At first the stage appears quite small, filled up with various objects attached to several ropes to be swallowed up from the backstage on a big brownish red slide that recalls Indian natural colours and projects into magical landscapes.

The slide now emptied out, left sprinkled with handful of soil here and there, becomes the main platform for Kahn to perform as the earthy natural element colours his white suit. Indian classical movements, rotations, specific symbols created by his manly speaking hands are unified with a contemporary dance language that bewitches and enchants.

Influential rasping live music accompanies beautiful, soft and strong movements that are grand, clear and emphasised, allowing one to reflect upon the fragility of human being and its immense cruelty.

The plot of the piece is based on the crucial question Kahn asks himself and opens up to interlocutors worldwide - how can we as humans, have the ability to create extraordinary and beautiful things from our imagination, and equally, our immense ability to create and commit violence and horrors beyond our imagination? - The question encompasses the tragedy of lost humanity, unrestrained opportunism, widespread detachment, inadmissible violence and shocking indifference in a world lacking in reflection and consideration. 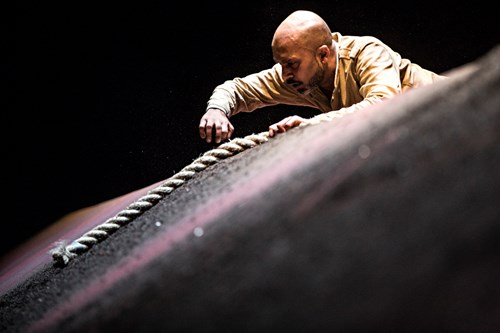 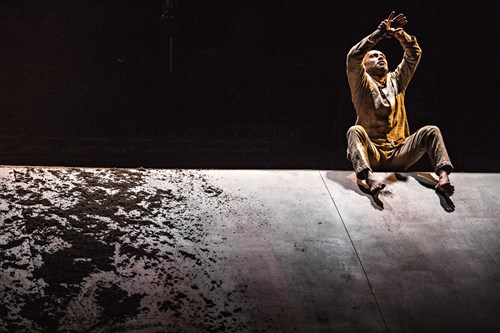 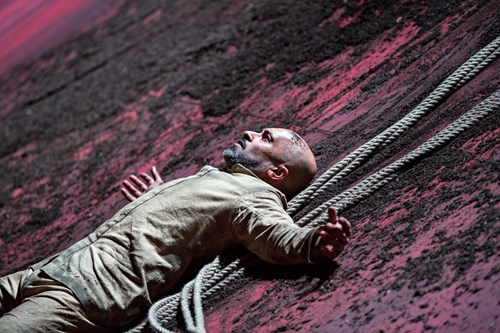 Struggled and strained movements call to mind an avoidance to engage in self interrogations and in constructive criticism leading to a troubled discomfort.

Remarkable the image when Kahn winds up his head with a long thick rope and starts wobbling and spinning appearing disoriented and resourceless.

The strained movements evoke a potentially felt frustration alluding to the helplessness towards careless tendencies and even more severely, to the despondency related to deplorable behaviours.

Dedicated to the forgotten soldiers of all wars, Xenos reflects on the abysmal conditions of those who are prisoners of dreadful fights, victims that in many cases become enforcers.

In this puissant piece, the story of the individual becomes a vector of questions about the humankind and its contrasting directions.

This eternal enquiry into the facets of the human being is superbly performed highlighted by marvellous and magical moments stimulating vivid images, pensive reflections and emotional reactions.

Kahn's body and soul with his highly personal and powerful dance language invites to reflect on the condition of humanity while lets the audience immerse in a conscious meditative state.

Particularly engaging and moving, especially the last thirty minutes of the performance, when the weariness and beautiful vulnerability of the soldier-dancer, now with nude torso bestrewed with white chalk in opposition to the dark soil, gives force to a thewy, potent and splendid authenticity showing his masterly touching presence.

At the very end, a noisy cascade of pine cones symbolising descending wisdom, echoes the melancholy and grief of our times.