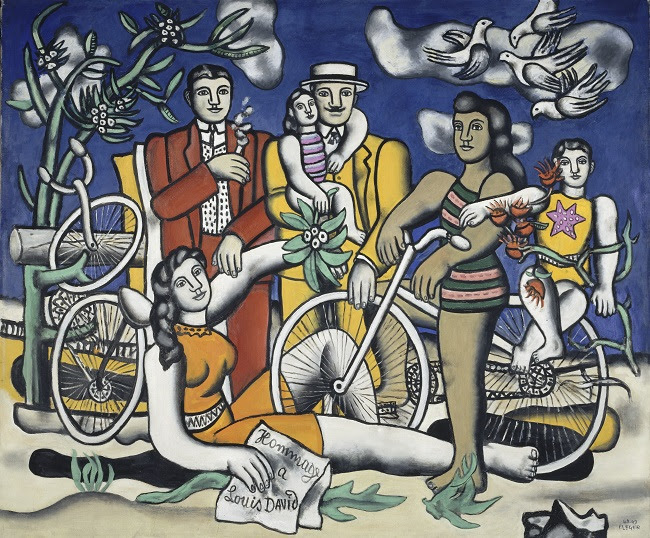 BOZAR is devoting a major retrospective to one of modern art's most famous artists. With around 100 works and a vast selection of archive documents, the retrospective covers every facet of the work and personality of Fernand Léger. Tracing his journey in all its diversity, the exhibition sheds new light on the way the artist reinvented painting by drawing on the spectacle of the world around him and opening up to other arts, including poetry, cinema, performance arts and architecture.

The French artist Fernand Léger (1881 – 1955) is one of modern art's most famous figures. Son of a farmer in Normandy, and initially training as an architect before becoming a painter, Léger developed his own vision of cubism after discovering Cézanne in the early years of the 20th century in Paris.

Generous, curious about everything and a great traveller, he is the passionate witness to a tumultuous century marked by the arrival of an urban, industrialised society. "Beauty is not classified or codified. Beauty is everywhere, in the order of the arrangements of your saucepans on the white walls of your kitchen as well as in a museum." Fernand Léger's words echo like an ode to freedom of observation, refusing any established hierarchy between the Fine Arts and everyday life. The artist speaks of the aesthetic power of modern life, vibrant and colourful, and the extraordinary challenge this represents for artists. His work presents images of the city with its man-machines, its advertising typography and its ingenious structures of pipes and machinery. In the aesthetic of contrasting shapes and colours, his painting reflects the fragmentary nature of vision and the rapid rhythms of a fast-changing society. His art is like a hymn to the ordinary man. Devoted to creating works that are simultaneously modern and popular, he was deeply committed to the cause of social progress from the 1930s onwards.

BOZAR pays homage to the exceptional personality of Fernand Léger, eighty years after the exhibition that the painter himself organised at the Palais des Beaux-Arts in 1938, and sixty years after his major retrospective in Belgium in 1956.

Fernand Léger. Beauty is everywhere retraces the complete career of the artist and looks back on 50 years of creativity. The exhibition includes 100 works organised into six chapters (Speed and Machines, Poetry, Cinema, Circus and Dance, Architecture, Political Commitment) that explore essential themes in his work. The exhibition begins with his monumental painting Le Transport des forces (1937), which is 8 meters wide.

The exhibition sheds new light on the manner in which the artist reinvented painting by drawing inspiration from the world around him and dialogue with other artistic disciplines. Léger literally took painting outside the confines of the picture frame to present it on screen and stage, and even on the walls of the city. In his quest for renewal, the painter experimented with the most diverse artistic forms, from the illustrated album to ballet sets and including wall frescoes and experimental cinema. All these experiences subsequently fed back into his painting.

This monographic exhibition was made possible thanks to the exceptional support of the Centre Pompidou,National Museum for Modern Art, Paris, which has loaned many works, including La Noce and La Composition aux deux Perroquets. These are supplemented by major works from various public and private collections. Fernand Léger. Beauty is everywhere was presented at the Centre Pompidou-Metz between 20 May and 30 October 2017.