A Voice from the Border 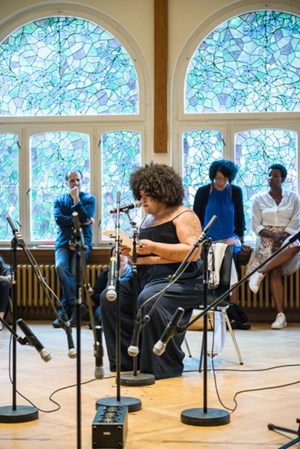 Brazilian artist Jota Mombaça –who identifies as gender fluid- uses their writings and performances to describe how the art world is a space they run across because their “body” is not authorized to inhabit it.

Brazilian artist Jota Mombaça –who identifies as gender fluid- uses their writings and performances to describe how the art world is a space they run across because their “body” is not authorized to inhabit it. Mombaça is black, queer, and from a marginal neighborhood. Through their art they reclaim their body by fighting the grammars of power that embody it. In the performance Corpo-Colônia (Body-Colony) a woman tosses gravel on Mombaça’s kneeling naked body as they read a manifesto of the notion of “body” as colonial occupation. In Naovao they use their own blood to write sentences on white flags blurring the political truce the flags symbolize.

Berlin’s art world is revisiting its history, reflecting on the limits that have defined it and determined who gets to partake. The exhibition Hello World at the Hamburger Bahnhof reframes the museum’s collection putting the artworks of European artists in dialogue with those of their counterparts from places like India, South America, Tahiti and Eastern Europe; and with the statements like We don’t need another hero and I’m not you think I’m not the all black curatorial team of the X Berlin Biennale defy racial assumptions. Mombaça’s thoughts on decolonial turns, queer identity, violence and the link between monstrosity and humanity enrich this introspection. Theirs is the voice of an outsider who found power in what society considered their weaknesses.

Cristina Esguerra: Why did you choose to do art?

Jota Mombaça: It happened to me somehow. It wasn’t like “Oh I have dream to become an artist.” I don’t come from the art world. I come from a very poor neighborhood in Brazil. My family doesn’t have access to things I have.

I studied social sciences but I saw in the arts a bridge that is not easy for me to cross, but a bridge. That’s why I started to work. My art is very connected to my thinking.

E: How does your art affect your thinking?

J. M: It allows me to create forms of expression through ritual and through language that cannot be spoken in the way we are used to speaking. When you think about thinking in the modern colonial feel, or in a Eurocentric manner, we think language within a closed system. The performance allows me to think in different manners: [in We agreed not to die] I think with my hands while I’m doing hand craft-knives, think with my hammer while I’m breaking glasses. It provides me the space and the tools for thinking beyond modern colonial texts.

E: Is it a way of thinking outside colonial language?

M: It’s not properly outside. I don’t believe in an outside. I create tunnels, bridges, and different topographies, but I’m not outside. I’m within but in a different space. In like an underground railroad or a wormhole.

E: Has your art impacted the way you feel about your body?

M: My work is embodied in a certain way. My writings, the way I speak, the way I present myself are forms of embodiment, of claiming my body. The body is one of the many territories occupied by colonial forces. I know it is marked and defined by certain logistics of normalcy, of raciality, of gender that try to hold it within the limits of colonial mentality. My work is part of my struggle against it. I use it against the captures that try to hold my body within a system I don’t want to take part of.

But I don’t think I’m more free because I’m an artist. I think doing the art I do I’m struggling for decolonialization, struggling for my body to decide what to do and how to work with it.

E: How do you understand the concept of “body”?

M: I don’t mean the one you’re seeing: this body that is fat, black, gender disobedient, Brazilian. I mean my body as the collective that makes it up. The concepts and forces that cross it, the people that came before me and who are coming. They’ll have to face certain things because of marks I embody. 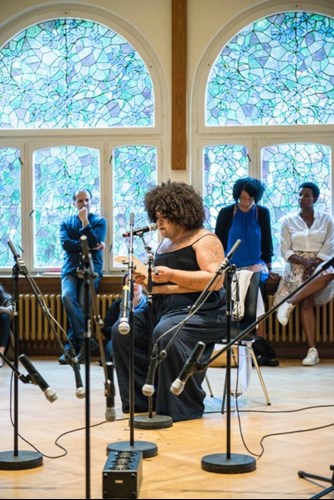 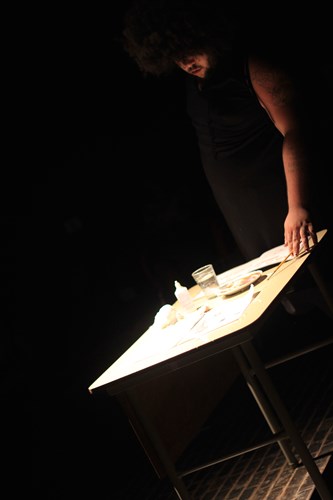 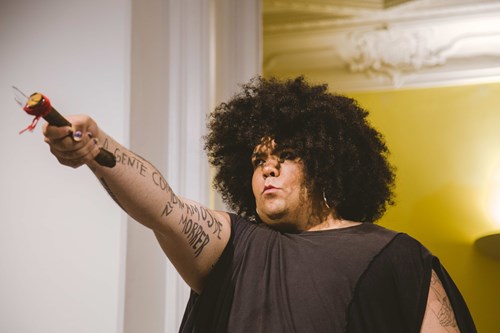 E: You say you’re not freer because you are an artist, but do you believe in liberation?

M: I like the idea of liberation. But for me to liberate is to become aware. To liberate is not to free the body or to create the fiction of freedom. It’s to be aware of the problems you have to cross. For me the idea of liberation is of an unfinished process. We keep seeing the modern colonial texts and forces even coming into liberation narratives. I know liberation is haunted by ghosts of power, and I don’t want to see it as a way to get there. I don’t believe we can get “there.” I don’t even know what “there” looks like. I believe liberation is about doing a cartography of power while you do a cartography of the escape routes.

E: What do you think is the role of art?

For me it’s important to say that because several times I got invited because people thought “Oh we’ll have this queer, black artist speaking here.” Sometimes institutions do that to present themselves as more diverse, more multicultural and open-minded. They appropriate our presence to define their properties. It’s a very colonial movement. For me not because I’m there, I’m theirs.

E: Why do think the art world included you instead of others?

M: I don’t want to say luck because it’s not just that. I fell in love with theory and thinking. I learned how to speak in a colonial way, managing to present ideas in a way institutions could not simply erase. That definitely allows me to move across. I know a lot of people who say powerful things but don’t learn how to make it past institutions filters.

E: Does being an outsider make you more aware of the rules of power?

M: Definitely. It’s visible when you talk about citizenship in Europe. Citizens don’t know what that means. Migrants know. They have to learn to convince the State to give them permission to stay, to live, to work, to love. This demands of them a knowledge locals don’t have because they never had to learn. I was in Spain in March and you have to take a test to get your visa. I decided to ask my Spanish friends the questions of the test. It was funny to realize they didn’t know what was apparently basic stuff about the culture.

Being in the margins teaches you how the world really is because we look at it as a problem. When you look at something as a problem you truly understand it because you need to raise questions. There’s a knowledge produced in the margins that cannot be produced in the center or doesn’t have the same intensity from a position of power. Power structures are always trying to capture it, and always manage to do it somehow. But while they’re captured new perceptions are created because the center is shaping itself in different manner. We’re perceiving the mutations and reading the new status quo. I think it’s a superpower, the superpower of the margins. Of course it’s rendered as less. That’s the characteristic of modern colonial epistemology.

E: What would you say are your superpowers as an individual?

M: Precisely to break with individuality. My superpower presents itself when I’m not an individual, when I recognize how collective I am, how collective my thinking is. In the art world, and moving between places where I cannot meet anyone like me, I’m always in a kind of solitude and I need to remember I am not alone. I perceive the multitude that makes up my body. This is a superpower but it can also be hard to live with because it means to feel the death of black people as my own. But I think it’s needed in order to survive. I have to pay to be who I am because it’s what the world demands, and it’s nice when you look other people that understand without having to explain.

E: How do you understand individuality?

M: The individual is a toxic construction, and not an interesting one. I really think if we maintain ourselves in what I call “social hypnosis” we cannot see forward. We need to go deep into all forms of thinking: abstraction, the imagination, science fiction, magic, philosophy. We cannot deal with the world if we stick to the language it created in order to reproduce itself. We need to find tunnels, and we need to proliferate them. We cannot assume they will save anything but it’s the only work worth doing.

E: The X Berlin Biennale started on June 9th. You took part in the opening of its public program I am not what you think I am not, are one of the authors of its manifesto, and published and essay on its catalogue. What do you think about the Biennale’s curatorial discourse?

J.M: It’s especially beautiful for me because it’s an all black curatorial team. It’s a powerful representation and no one can deny it. But we also know –I feel them knowing- that representation is not everything we need. They’re aware of the limits of their position as curators of a huge institution, and are trying to work within them. They’re an all black team, and they’re refusing to talk about racism in a politically correct way. That would be too simple. They refuse to occupy the position of black curators because they know they are more. That’s why the name of the program is brilliant: I’m not what you think. It’s a powerful statement.

They’re using the space to work as a virus of ideas and perspectives that are not present all the time, that are erased. I’m happy just watching even if know they’re predicament. It’s not a revolution it’s a Biennial.

E: What do you think is the purpose of your life?

M: It changes a lot. It’s to learn how to redefine itself according to the situation. To mutate, to change myself, the world, my communities. I guess the purpose of my life would be to be constantly reshaping what life is.

These are edited excerpts of the interview.