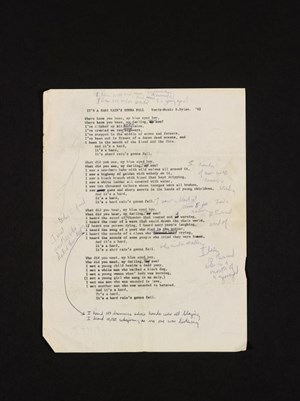 Revisions and Alternative Ending to Revolutionary Song Revealed for the First Time. Estimated £150,000-200,000 at Sotheby's.

In 1962, in a small room above the legendary Gaslight Folk Club in Greenwich Village, New York, the 21-year-old Bob Dylan, hunched at a typewriter, wrote what is widely considered one of the greatest songs in the history of rock music. 53 years later, the original type-written manuscript for the revolutionary, A Hard Rain's A-Gonna Fall, has emerged for sale at Sotheby’s in London, where it is estimated to sell for £150,000-200,000. Described by Rolling Stone magazine as “the greatest protest song by the greatest protest songwriter of his time”, the song marks a key artistic breakthrough by the most influential songwriter alive today. The lyrics will be auctioned as part Sotheby’s “Rock & Pop” sale in London on the 29th September 2015.

The key works of Dylan’s canon have invited debate for decades, but there is a consensus that A Hard Rain’s A-Gonna Fall represents the first full blossom of Dylan as poet. It was the Greenwich Village folk scene that provided the environment which enabled Dylan to stretch his imagination in new and startling ways, and this draft comes from the heart of that scene. The folksinger Tom Paxton recalls the origins of the song:

"there was a hide-out room above The Gaslight where we could hang out. Once Dylan was banging out this long poem on Wavy Gravy's typewriter. He showed me the poem and I asked, 'Is this a song?' He said, 'No, it's a poem.' I said, 'All this work and you're not going to add a melody?"

It is noteworthy that Paxton recalls that Dylan described the version he saw as a poem, not a song, and Dylan's own comments on the song's origin also suggest that it began life as a poem. Although most likely earlier performed at the Gaslight, the song was formally premiered at the Carnegie Hall on September 22, 1962, as part of a hootenanny organised by the folk singer Pete Seeger. Seeger recalled:"I had to announce to all the singers, 'Folks, you're gonna be limited to three songs. No more. Cause we each have ten minutes apiece.' And Bob raised his hand and said, 'What am I supposed to do? One of my songs is ten minutes long’.” Recorded in a single take on December 6, 1962, the version that appears on Dylan’s second album, The Freewheelin’ Bob Dylan, comes in at 6 minutes and 55 seconds.

The scratchings-out and revisions offer a unique insight into the creative process behind one of the world’s most loved songs as it begins to take its final shape. The deepening vision of a pending apocalypse is powerfully present and the overall structure of the song is also complete, but there are notable aspects were the draft differs markedly from the final version. In the opening stanzas, the famous question and answer phrasing has not yet taken its familiar form, with the questioner instead asking:

The scope of Dylan's imagination and the fluidity of his writing are evident in the way that some eight lines containing powerful and ominous images are scattered around the margins of the typescript, scribbled down as they occurred to Dylan. These include strange and memorable evocations of doomsday that are familiar to listeners, such as "I been 10 thousand miles in a mouth of a graveyard" and "I heard 100 drummers whose hands were all blazing", as well as abandoned fragments like "I saw a black cat cross tails..."

This is also a surprise in the final chorus, in which the threat or promise of coming "hard rain" is unexpectedly strengthened when the speaker's prophetic tone takes on a new moral imperative. In place of “gonna fall”, Dylan implores that “ a hard rain must fall”:

There has naturally been much discussion of what 'Hard Rain' portends. Dylan himself has given typically inconsistent answers. He has claimed (and also denied) that it was written in response to the Cuban Missile Crisis, but it has long been noted that it was first performed at Carnegie Hall on 22 September 1962, some weeks before the crisis erupted. This draft, which surely precedes the Carnegie Hall performance, shows once and for all that the structure and theme were in place before nuclear war was suddenly an imminent possibility.