Chuck Close, Where Are Your Friends? 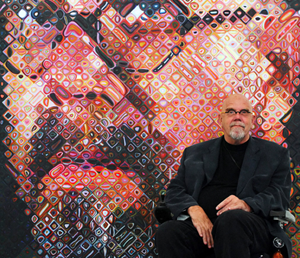 American Artist Chuck Close has been accused of sexual harassment and of attempting to persuade women to pose naked for him. The story originally broke in the New York Times in an article in which two women spoke out against the artist, and was followed by further accusations in the Huffington Post.

American Artist Chuck Close has been accused of sexual harassment and of attempting to persuade women to pose naked for him. The story originally broke in the New York Times in an article in which two women spoke out against the artist, and was followed by further accusations in the Huffington Post.

Chuck Close, aged 77, is known for his photorealist art and large-scale portraiture. He suffered a devastating spinal artery collapse in 1998 which has left him several paralysed but has continued to produce art at an international level.

Following the accusations, Artdependence reached out to the galleries who represent Mr Close and have become ambassadors for his work both in good times and bad: Pace Gallery, Danziger Gallery, Blum & Poe and Berggruen Gallery. We asked them: “As a gallerist and ambassador of his work, can you give us a statement about the sexual harassment case Chuck Close is currently involved in?”

We received one solitary response to our question. The commentator stated that “as my relationship with Chuck Close is very superficial, and I don’t know all the facts, I don’t really have anything to say.”

On December 20th, Chuck Close issued an official apology in response to the accusations. He admitted speaking to the women frankly and crudely about their body parts and explained that this was part of a typical process in assessing potential models. “Last time I looked, discomfort was not a major issue of offense,” Close told the New York Times. “I never reduced anyone to tears, no one ever ran out of the place. If I embarrassed anyone or made them feel uncomfortable I am truly sorry, I didn’t mean to. I acknowledge having a dirty mouth, but we’re all adults.”

Close continued by saying “As a quadriplegic, I try to live a complete, full life to the extent possible. But given my extreme physical limitations, I have found that utter frankness is the only way to have a personal life.”

As an internationally renowned and celebrated artist, Close has made considerable amounts of income for the galleries who represent him. The general silence surrounding these allegations will cause further embarrassment and suspicion for the art world, who have recently been rocked by a series of allegations regarding sexual harassment and inappropriate behaviour. Many industry insiders fear that the latest allegations are simply the tip of the iceberg.

Whilst the galleries representing Mr Close have not commented on the allegations, they have also continued to represent his work on their websites. As an industry which promotes expression of ideas and free thought, ArtDependence strongly believe that the international art world will need to do more to support and listen to the voices of a growing number of women who are claiming that their personal rights and safety have not been taken seriously for far too long.

Image on top: Chuck Close sits in front of his painting. Courtesy of Getty Images.