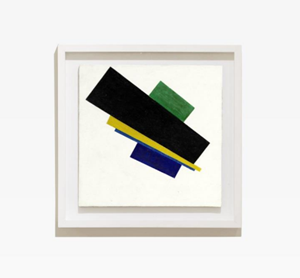 One of The Most Important Paintings by Kazimir Malevich Ever To Appear At Auction. Suprematism, 18th Construction - A Highlight of the Critically Acclaimed Tate Retrospective in London - To Be Offered at Auction for the First Time.

“Kazimir Malevich’s 'Suprematist' canvases – of which Suprematism, 18th Construction is an outstanding, pure example - are his greatest achievements. Their majestic purity echoes throughout the visual language of modern art, architecture and design. In the last 25 years only three major works by Malevich have been sold at auction, the most recent of which was sold in 2008 at Sotheby’s New York for a record $60 million. Suprematism, 18th Construction shares the same exceptional provenance and we are honoured to have been entrusted by the artist’s family once more. Appreciation for works by Malevich is now more global than ever before, and with so few of these rare early Suprematist works remaining in private hands, the sale presents one of the last opportunities to acquire one.” Helena Newman, Sotheby’s Co-Head of Impressionist & Modern Art Worldwide.

The History and Significance of Suprematism, 18th Construction

Suprematism, 18th Construction dates from the height of the artist’s career, a period that marked the epitome of revolutionary abstraction and placed Malevich as one of the most important international artists of the 20th Century. It was held in the collection of the Stedelijk Museum, Amsterdam, for fifty years before being restituted to the artist’s family. This work was included in the first ever showing of Suprematist pictures in November 1915 at the Exhibition of Modern Decorative Art in Moscow, which preceded the seminal 0,10: Last Futurist Exhibition of Paintings held in Saint Petersburg (at the time Petrograd) in 1915-16 – an exhibition that was to establish Malevich, alongside Popova and Tatlin, as one of the most influential artists of his era. In 1927, Malevich accompanied Suprematism, 18th Construction to an exhibition in Berlin, introducing Western Europe to the unprecedented aesthetic that he had devised. In June 1927, the artist was obliged to return to the Soviet Union and arranged for the paintings to be stored in Berlin, but he was prevented from leaving the Soviet Union, where he died in 1935. Suprematism, 18th Construction was later entrusted to the German architect Hugo Häring, who purportedly sold it to the Stedelijk Museum. It was finally returned to the artist's heirs after a historic settlement was reached with the City of Amsterdam following a 17-year struggle. Most recently, the work was included in Tate Modern’s critically acclaimed retrospective of 2014, and it has been requested by the Fondation Beyeler to be loaned for their forthcoming reconstruction of the 0,10 Exhibition.

Malevich and the Evolution of Suprematism

Malevich’s art heralded a new succinct language of abstract forms and bold colour planes which was as revolutionary as the Cubism and Futurism from which it emerged. Suprematism was rooted in Malevich’s desire to move beyond traditional representation towards an art of pure colour and geometric form and proposed something new in that it rejected a subjective basis or theme. “Colour and texture in painting are ends in themselves,” he wrote in his 1916 treatise.

The genesis of Suprematist painting was preceded by Malevich’s experiences as a young artist of the fledgling Russian avant-garde. In 1907 he was invited to exhibit with notables such as Wassily Kandinsky and Mikhail Larionov at the Association of Moscow Artists. Around 1914, Malevich became a leader of the Russian Futurist movement, and began taking bolder steps with his painting. By the spring and summer of 1915, he finally discarded all reference to figuration in favour of coloured, unadorned geometric shapes on a white background and painted strikingly reductive compositions.

In 1915, the artist wrote a lengthy treatise about these paintings commonly known as the “Suprematist Manifesto”, which was published in Moscow in 1916. Unlike Soutine and Chagall, who left their native country in search of artistic inspiration in France, Malevich remained in Russia through the turbulent years following the revolution. Born in the Ukraine in 1878, he enrolled in the Moscow School of Painting, Sculpture and Architecture in 1905 and remained in that city throughout the 1910s. His early paintings from 1910-13 were not without reference to the French avant-garde, and incorporated a variation of the Cubist aesthetic made popular by Picasso and Braque. But as his painting developed, Malevich began reinterpreting the styles of Cubism, as well as Italian Futurism, and devised an artistic philosophy that was decidedly his own. Suprematism rejected the idea of objective representation and eliminated any references to nature. The international breakthrough of Malevich’s career did not occur until the seminal 1927 exhibition, Grosse Berliner Kunstausstellung, in which Suprematism, 18th Construction was featured alongside seventy other of the artist’s works.