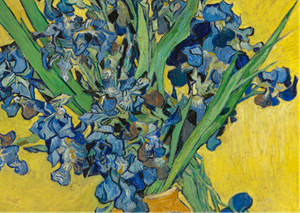 There are 325 species of iris flower. Most wild iris are blue or purple. Vincent Van Gogh’s representation of a bouquet of iris flowers, titled Irises (1889), appears to show the blue variety, although records show that the original paint would have been a vibrant purple before the passing of time dulled the pigment.

There are 325 species of iris flower. Most wild iris are blue or purple. Vincent Van Gogh’s representation of a bouquet of iris flowers, titled Irises (1889), appears to show the blue variety, although records show that the original paint would have been a vibrant purple before the passing of time dulled the pigment.

In 1889, Dutch artist Van Gogh agreed to be admitted to the Saint Paul-de-Mausole asylum in France following incidents of self-mutilation and mental ill health. During his time at the asylum he created nearly 130 paintings, many of which drew their inspiration from his new surroundings - particularly the hospital gardens, where he set up his canvas within days of his arrival.  Irises was one of the first of these paintings.

For Van Gogh, this work was no more than a simple study, a way to occupy himself during his stay. There are no known drawings or sketches for this painting and it appears that Van Gogh committed it directly to canvas with a minimum of preparation or planning. Many people have speculated that Van Gogh was inspired by Japanese woodblock prints featuring flowers and natural objects.

Despite Van Gogh’s seeming ambivalence towards the work, it has become one of several much-loved images created by the artist. During his life time, his brother chose to submit the piece to exhibition, but, like most of his paintings, it did not sell until after his death when it was procured by the French art critic Octave Mirbeau who wrote “How well he has understood the exquisite nature of flowers!”

The original bold purple colours made this work vibrant and eye catching, contrasting starkly with the bright yellow backdrop (Van Gogh’s favourite colour). The colour purple is itself a potent mix - stimulating, warning red meets serene and peaceful blue. For Van Gogh, contained within an asylum, seeking health and stability amidst a home for the mentally infirm, this complex, paradoxical mix must have felt at once relevant and disorienting. It is interesting that his eye was quickly drawn to these rich, purple flowers. He spent several days during his first weeks at the asylum in deep contemplation of the purple Iris and called the painting “the lightning conductor for my illness.”

Purple has always held deep symbolism for many people. In the eighteenth century, purple dyes were luxurious and rare, creating an association with wealth and opulence that is still retained to this day. From ancient times until today, purple has been associated with royalty and power. Roman Emperor’s wore purple robes and were often nicknamed ‘The Purple’ as a result.

It is interesting to ask how Van Gogh may have felt about money and wealth at this moment in his life, never having gained financial success for his work. Van Gogh sold just one of his paintings during his lifetime and gained little of the critical acclaim his work now enjoys. He dreamed of creating an artist’s colony - a community of working artists - but despite several invitations to post-impressionist painters, he only ever played host to one: Gauguin, who moved in with Van Gogh after finding himself unable to pay rent elsewhere. Instead, Van Gogh found himself living in a very different kind of community, amidst the mentally ill inhabitants of the asylum.

As well as wealth, purple colours are also associated with the creative or spiritual brain, representing the top of the head in the traditional chakra system. Perhaps Van Gogh was drawn to this healing force.

The iris flower itself also has deep symbolic meaning. In Ancient Greece, the goddess Iris acted as a link between heaven and earth. She used the rainbow to make the journey. The flower was named in her honour and was often planted over graves to summon the goddess and ease the passage to heaven. Van Gogh committed suicide the following year, in 1890, and died in relative poverty, never enjoying the wealth and riches his paintings would later generate.