Symbolism in Art: The Blue Willow 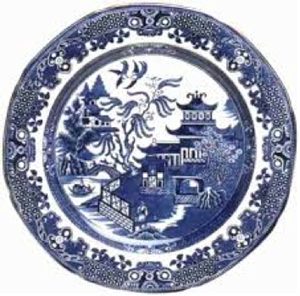 The Blue Willow (or The Willow Pattern) represents a Chinese garden with a large pavilion and a bridge on which three figures are seen. In the upper left corner two flying birds and a distant island with trees and pavilions are depicted. The legend associated with it goes as follows. A rich and powerful mandarin lived in a big house and worked as a customs officer for the Emperor.

“There is something in the nature of tea that leads us into a world of quiet contemplation of life.” Lin Yutang, “The Importance of Living”

'There are few hours in life more agreeable than the hour dedicated to the ceremony known as afternoon tea.' Henry James

Although it is difficult, or maybe even impossible, to say when was the beginning of the cultural exchange between the East and the West or what was the first hybrid work of art, one thing we can be sure of is that the Age of Discovery, the time between 15th and 17th century, was the turning point beyond which artistic exchange and appropriation could never be stopped. Together with silk, spices, herbs and medicines many books and pictures from the East came to Europe to satisfy curiosity and bring pleasure. Among all new visuals one pattern in particular came to dominate the art of the period.

The Blue Willow (or The Willow Pattern) represents a Chinese garden with a large pavilion and a bridge on which three figures are seen. In the upper left corner two flying birds and a distant island with trees and pavilions are depicted.

The legend associated with it goes as follows. A rich and powerful mandarin lived in a big house and worked as a customs officer for the Emperor. He had a beautiful daughter, Koong See, who fell in love with his bookkeeper named Chang. When the mandarin found out about it he built a fence to separate them and secluded his daughter in a separate house. To ensure that their relationship will come to an end he married her to a wealthy duke. The lovers arranged to elope and settled on a small far-away island where they lived happily until the Duke sent soldiers to kill Chang. Upon the loss of her beloved Koong See set the house on fire and died in the flames. The gods transformed the two lovers into immortal doves who remained united forever.

This romantic tragedy intrigued the hearts and the minds of the aristocracy all over Europe but especially in Britain where just like in China drinking tea had always been not a habit but a ritual. The legend only added even more meaning to it. Nobody cared to check if any of it was true. And it was not.

In fact neither the design, nor the story attached to it are Chinese. The former, although inspired by Chinese models, was created by British engravers and in turn copied by the Chinese to sell more of their produce to the foreigners. As for the latter, it was a marketing trick presumably conceived by Thomas Turner from the Caughley factory to increase the sales.

The plan worked out for two reasons. First, because the Chinese Empire had imposed restrictions on travel within the country and even the European merchants who travelled frequently had little knowledge of the country beyond the trading posts at Macao and Canton. The result was the emergence of an imagined Chinese culture which though based on Chinese models was more of a rendition of their European interpretation. However, and this is the second reason why the plot worked, at that time European aristocracy enjoyed prosperity, abundance and calm never seen before – a very favourable ground for all sorts of fantasies and illusions - and few were eager to spoil the party. Critical minds did not see anything wrong with a legend about a daughter disobeying her father being popular in a Confucian society. The resemblance to the style of the European Romantic movement also was never mentioned. After all, it was the British author Oscar Wilde who said: “illusion is the first of all pleasures”.