Symbolism in Art: The Cow 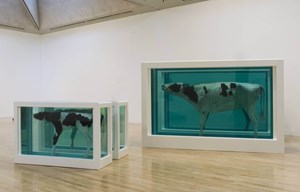 Damien Hirst is a central figure in contemporary art. One of the wealthiest living artists, his work divides opinions and he has become synonymous with shock value an displays of dead or decaying animal corpses.

Damien Hirst is a central figure in contemporary art. One of the wealthiest living artists, his work divides opinions and he has become synonymous with shock value an displays of dead or decaying animal corpses.

Born in Bristol, England in 1965, Hirst rose to prominence in the late 1980s and early 1990s. His mother described him as a ‘morbid’ child. From an early age he was fascinated by biology, particularly pathology, searching through books to study images of disease and injury. The young Hirst was also prone to misbehaviour and getting into trouble. He was caught shoplifting on two occasions and failed to attain good grades in his school exams, most notably achieving and E in his art art A-level.

Despite this setback, Hirst was awarded a place at Goldsmith’s College. During his second year, he helped to stage a group exhibition titled Freeze which featured the work of several of his contemporaries, including Fiona Rae and Sarah Lucas. The exhibition was a huge success and is commonly credited with launching the careers of a collection of artists often referred to as the Young British Artists, of which Hirst was one of the most recognisable names. Their art seemed to challenge the norms of exhibition and of the art establishment itself.

It wasn’t long before Hirst’s attracted the attention of art collector Charles Saatchi, who began collecting some of his pieces. This was a relationship that would propel Hirst into the spotlight and open up new doors to the art establishment.

Hirst’s first solo exhibition took place at Woodstock Street Gallery in 1991. In 1992 he participated in an exhibition of the Young British Artists where he displayed a work titled “The Physical Impossibility of Death in the Mind of Someone Living.” It featured a 14-foot shark body which had been preserved in a tank of formaldehyde. In 1993 he continued the theme, displaying a piece titled “Mother and Child Divided” at the Venice Biennale. It featured a bisected cow and calf, divided across four glass cases and preserved in formaldehyde. The work caused widespread controversy and propelled Hirst’s name onto the international art scene.

In much of Hirst’s work, death is a central theme. Raised a Catholic, many critics have pointed out that Hirst’s work seems to echo the motifs of blood and death seen in the European still life tradition. His animal corpses seem to add a modern twist to the ‘momento mori’.

Hirst has created several works of art that feature cows or bull. In 2008 Hirst took an unprecedented decision to take his own work to auction, bypassing the galleries he worked with. As part of the auction, he sold a work called The Golden Calf, a cow suspended in formaldehyde with 18-carat gold horns and hooves.

In a further piece of work titled Cock and Bull, Hirst displays a Hereford cow with a cockerel standing on its back. Alongside this work, Hirst also created a painting titled ‘Cow and Chicken’ which featured 90s cartoon characters Cow and Chicken from the Cartoon Network.

Hirst was awarded the Turner Prize in 1995. In the same year, Hirst planned an exhibition of rotting bull and cow at a New York gallery. The exhibition was forced to cancel after the health authorities of New York city prevented them from displaying rotting flesh. Hirst was able to navigate the health and safety concerns and stage the exhibition the following year.

Hirst’s fascination with the cow reverberates throughout his work, returning as a recurring motif on several occasions. In several global traditions, cows are seen as sacred or special. Amongst Hindu communities the cow is revered. Hindus refraid from eating beef or harming the cow in any way. In fact, the cow is considered to be India’s most sacred being. Buddhist tradition also takes the cow to be sacred. For Buddhist’s the calm, tender nature of the cow aligns with their vision for a life well lived.

Cows and humans have shared a special relationship for hundreds of years, co-existing to provide milk and meat for human survival. In return, humans have bred and tended to cows around the world. As a spirit animal, the cow is said to symbolise trust and positivity. In Norse mythology, the cow Audhumla had udders that emitted four rivers of power that provided nourishment for giants.

In modern western society, the cow has taken on a much less sacred and mutual relationship. Cows are often associated with being fat or overweight. Calling someone a ‘cow’ is a common insult. For many westerners, cows are viewed as lazy, idle and commonplace.

Hirst’s art makes an icon of form of the cow, suspending its dead body on display for eternity. Perhaps he is attracted to the apparently impotent power of the giant beast that has become so easy to tame and manipulate, or perhaps he enjoys showing us the common and the every day in a new and surprising light. Either way, Hirst has spent his career creating one central piece of art: his own image. Hirst’s name is synonymous with modern art, with controversy and with pushing the boundaries. He has received much criticism for being too much of a showman, an entrepreneur and a marketeer. The cow, with its large, muscular form and impressive stature makes the perfect centrepiece for his work, although its symbolism is complex. Depending on the viewer it could be a sacred offering, or simply a commonplace beast. Hirst removes the cow from both of its more familiar roles, suspending it in front of us, immobile, impenetrable and ethereal.