Symbolism in Art: The Pumpkin 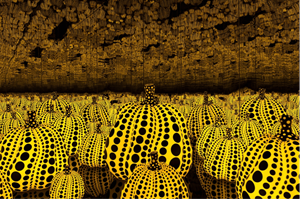 “I would confront the spirit of the pumpkin, forgetting everything else and concentrating my mind entirely on the form before me…I spent as much as a month facing a single pumpkin.” Yayoi Kusama.

Growing up in Japan, Yayoi Kusama was prone to vivid hallucinations. Suffering from sensations of “depersonalisation”, she would feel her own sense of identity slipping away as she became seamlessly submerged in the world around her. Prints and fabrics would come to life, ready to engulf her, and plants and flowers would speak. She describes seeing flashes of light, auras and dense fields of dots.

But it was the form of the pumpkin that perhaps captivated her the most, drawing her in with their bulbous, abundant and untameable forms. Kusama’s family cultivated plants and seeds, and, always having had an affinity to the natural world, she has described stumbling on a vine of pumpkins at an early age, feeling that they began to speak to her “in a most animated form”.

In the United States, pumpkins are most recognised as symbols of Halloween, of the changing weather as warmer days begin to give way to cool temperatures and darker evenings. They are a fruit that lives in the ‘in-between’, symbolising transition and movement towards the darker times. Originally, pumpkin carving was a practical pursuit. The darker evenings required bright lanterns to help guide people home and to invite good spirits to follow them.

Pumpkins are in fact one of the more abundant autumn crops, marking their growing season as the moment that most other vegetation begins to retreat in readiness for the winter months. Pumpkins are also one of the more resilient fruit, finding ways to grow large and bulging amongst sparse soil and sharing nutrients along a connected vine that reaches into the ground to replenish itself. It is perhaps for this reason that pumpkins have become symbols of prosperity, growth and abundance. The magical form of the pumpkin has long been celebrated in storybooks. Cinderella herself rode a pumpkin on her journey to meet her prince.

For Kusama, the pumpkin became a recurring icon in her work, almost replacing her own body as a symbol of self and often taking centre stage in paintings, installations and sculpture. Just like Kusama, the pumpkin is not a native to the United States. It was brought by immigrant settlers, quickly flourishing in the rich soils of the Americas.

In the same way, Kusama had grown up in Japan, working in a military factory during World War II. The war impacted her deeply, encouraging her to explore ideas about creative freedom and identity. Once the war was over, she enrolled to study painting at the Kyoto Municipal School of Arts and Crafts. Finding the Japanese form limiting, she began exploring the Western avant-garde, being drawn in by the freedom and expression she saw in the work. At the age of 27 she moved to the United States, settling for a year in Seattle before moving to New York, where, just like her beloved pumpkins, she began to flourish.

In Kusama’s paintings, pumpkins are usually brightly coloured, specked with her signature spotted patterns and seeping, spreading into the scenery around them. The pumpkin first appeared in her work as early as 1948, but didn’t become a central theme until the 1970s, when she depicted pumpkins using a wide variety of medium, from paintings and prints to sculpture and installation. Her most famous pumpkin is found at the Benesse Art Site in Naoshima, a small island dedicated to displaying art in natural surroundings.

For many years, Kusama’s art was largely ignored or forgotten. In the 1960s, she had gained a reputation as a performance artist and a convener of artistic ‘happenings’. In protest to the Vietnam war, she staged a series of public spectacles, in which naked subjects would appear painted in her signature vivid colours and polka-dot patterns. In an open letter to Richard Nixon, Kusama offered to have vigorous sex with him if he would call an end to the war in Vietnam.

In reality, Kusama’s relationship with sexuality was, by her own admission, troubled. As a child, her mother had sent her out repeatedly to spy on her womanising father as he conducted his affairs. Seeing the devastation this wrought, Kusama became simultaneously fascinated by and repulsed by sexuality. In the pumpkin, she finds a form that embodies this dual sentiment, with it’s prolific curves and bulges contained within a thick, impenetrable skin. It’s form appears almost fluid, changeable, and yet when approached, it is solid, contained.

Kusama returned to Japan in ill health in the 1970s, moving into a hospital and travelling to her studio every day to continue creating her art works and literary pieces. In the 1980s, Kusama’s work experienced somewhat of a revival and attention turned to her abstract paintings and sculpture. In 1993 she displayed her work as part of the Japan pavilion at the Venice Bienalle, receiving widespread praise and a renewed interest in her work, including her pumpkin paintings, sculptures and installations.