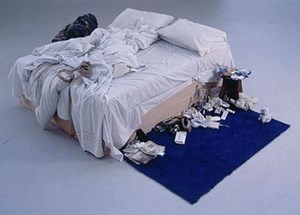 A twin, Emin was born in Croydon, South London and was brought up in the seaside town of Margate. At the age of 13, Emin was sexually assaulted. She later commented that this was “what happened to a lot of girls” living in her area.

Emin went on to study fashion at Medway College of Design. Whilst at the college she met poet Billy Childish and became the administrator for his small press. Childish was known for his confessional poetry. Around the same time, in the 1980s Emin was part of a group known as the Young British Artists and was renowned for the shock value of her art.

In 1984 Emin studied painting at Maidstone Art College. She moved to London in 1987 to study at the Royal College of Art and gained an MA in painting. She also spent a brief period of time studying philosophy at Birkbeck University.

After graduating, Emin has reported that she experienced two disturbing abortions, both of which took a dramatic toll on her mental health. In a period of great turmoil, she destroyed much of her previous work, including work from her time at the Royal College of Art.

Gradually gaining critical recognition, Emin opened The Shop on Bethnal Green Road in 1993. Along with a friend, she sold t-shirts and other items. The same year, Emin was given her first solo show at the White Cube gallery in London. It contained photographs of the paintings that had been destroyed as well as personal photos. It was an autobiographical show that also included readymade art items. Included in the show was a packet of cigarettes that her uncle was said to be holding at the moment he was killed in a deadly car crash.

Throughout Emin’s work, the theme of the bedroom, or bed has come to feature heavily. In 1996, she revealed a work called Sleep. It simply featured a pillow with a stitched label. In 2002 she released a work called To Meet My Past, an installation piece that included a four-poster bed and mattress with curtains that had been appliqued. The work plays with the ideas of using quilts to record memories. Against a background of cheery flowers, Emin has appliqued the words ‘Weird Sex’. One of the cushions reads “I cry in a world of sleep” and the other reads “Please God, don’t do this to me”.

Perhaps her best known work, Everyone I Have Ever Slept With 1963-1995 is a tent that was appliqued in needlework with the names of everyone Emin had shared a bed with including sexual partners, family members and the names of the two aborted children she had carried. It was shown at the Royal Academy in 1997.

In the same year, Emin appeared on a live television program on Channel 4 in which she was to take part in a panel discussion. As the show began, she appeared to be drunk and swore several times before walking out of the studio. The event shot Emin into the public consciousness and was widely reported in the press.

In 1999 Emin had her first US solo show at Lehmann Maupin Gallery. It was called Every Part of Me’s Bleeding. In the same year she was nominated for a Turner Prize. At the exhibition she exhibited My Bed. The installation was a readymade. It was claimed that the bed was Emin’s personal bed. It was unmade. She claimed to have spent several weeks sleeping and living in the piece during a period of great emotional turmoil. The piece included accumulated items from her time in the bed including used condoms, bottles and food items.

In 2011, Emin was appointed Professor of Drawing at the Royal Academy. Elton John, Jerry Hall, Naomi Campbell and George Michael were both public fans and investors in Emin’s work. She is also a close friend of singer Madonna who once said “Tracey is intelligent and wounded and not afraid to expose herself. She is provocative but she has something to say. I can relate to that."

Clearly, a bed or bedroom item have immensely personal meaning and symbolism. Although we spend a huge proportion of our life in bed, it is usually behind closed doors and not part of our public persona. Most people in our lives will never see our bed or bedroom.

In Emin’s work, the bed becomes a symbol of a hidden reality, of a personal struggle and a way of living that is usually kept behind closed doors. By bringing it into the public realm and placing her sleeping area on public display, she breaks down the boundary between personal and public, confronting the viewer with an aspect of her life that it may feel uncomfortable to spectate on.

Beds are also the gateway to sleep and dreams, and as such have often been viewed in fairytales and children’s stories as portals to another world. One’s bed is also often a symbol of home, and security, of deep personal connection and retreat from the world. It is where we retreat to when feeling unwell, where we outside of the public gaze, and also the place where our physical and sexual desires are met. Emin subverts this expectation, making the bed an item of public spectacle and including the various activities she engages in within the image.

For Emin, whose work explores the idea of confession, of exposure and personal struggle and emotion made public, the bedroom and the bed are interesting subject matters, providing a fascination and at the same time a natural distaste or feeling of voyeurism. Most viewers will feel a discomfort with being invited into such an intimate relationship with the artist and for Emin, this seems to be an integral part of her work.

Image on top: My Bed by Tracey Emin, source.