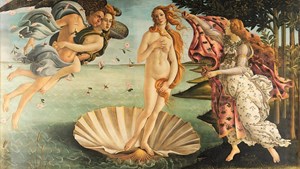 Kitty Jackson takes art lovers and curious minds through the symbolism and meaning of the sea shells used by Sandro Botticelli in his work, 'The Birth of Venus'.

Sandro Botticelli, born Alessandro di Mariano Filipe around the year 1445, spent the majority of his life living and working in Florence. He was very well known and celebrated during his lifetime and found favour with the wealthy Italian elite.

Information about his early life is scarce, but it is thought that he spend much of his childhood living in a fairly poor neighbourhood, where he struggled with the rigours of academic life and tended to be hyperactive and hard to contain within a classroom. It is said that the name Botticelli, which means ‘little barrel’ or ‘little wine cask’, was given to him by one of his brothers during these early years.

Having left school, Botticelli was given the opportunity to retrain as an artist, and it is known that in 1450 he studied with Fra Filippo Lippi, a painter who he appears to have apprenticed under and who taught him his characteristic clarity of lines.

Lippi was well connected in the city and he introduced Botticelli to many wealthy patrons, including Amerigo Vespucci, the man whom the Americas were named after. Crucially, Lippi also introduced Botticelli to the the Medici family, who became life-long patrons and supporters of his work. Botticelli flourished in his new career, and by 1470 he had his own workshop. In 1472 he joined the Compagnia San Luca, a fraternity of Florentine painters. 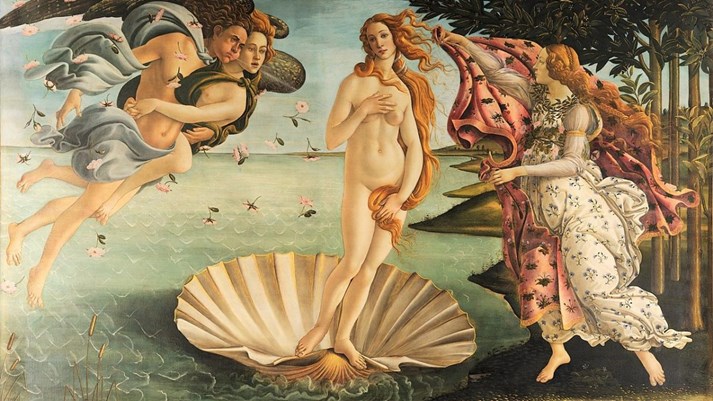 Following the death of his mentor and friend, Botticelli, now a well respected artist in his own right, decided to take on his own apprentice, Filippino Lippi, the son of his master. The two men worked together for many years.

Amid his increasing fame and reputation, in 1481, Botticelli was summoned to Rome by the Pope, Sixtus IV and asked to contribute to the paintings within the Sistine Chapel. During his time in Rome he also completed many papal portraits. These are his only known works outside of Florence.

During the 1480s, Botticelli also contributed to the fresco cycle for Lorenzo the Magnificen. In 1485, now extremely well regarded and esteemed in the Italian art world, Botticelli painted The Birth of Venus. The original commissioner for the work is now unknown, but the piece was eventually displayed in the villa Lorenzo di Pierfrancesco de’ Medici at Castello in 1499.

In the later years of Botticelli’s career, he was heavily influenced by the teachings of a charismatic Dominican friar who began to have influence in the city of Florence. Girolamo Savonarola Ferrara was known to burn works of art and books that he felt did not do justice to religious teachings. Some of Botticelli’s earlier works are thought to be amongst those that he destroyed. As a consequence of Savonarola’s influence, Botticelli’s later works became deeply religious.

The 1490s marked a time of turbulence and difficulty for Botticelli and for Florence. The Medici family were expelled from the city and the onset of plague and fighting across the city led to Botticelli and his work falling out of favour. It is said that in these later years, Botticelli’s characteristic sharp wit and good humour began to fade, leading him to spend increasing amounts of time alone. He died in his hometown of Florence in 1510.

‘The Birth of Venus’ is perhaps his most recognisable work. Within the painting, Venus, goddess of beauty and love, is depicted arriving to the island of Cyprus, carried on an enlarged scallop shell. Venus was said to be ‘born of the sea spray’. In Botticelli’s rendering, she balances delicately in all of her female beauty, reminiscent of a pearl shining inside it’s shell. Freshness, spring and femininity are woven into almost every detail of the painting, with delicate spring flowers blowing on the winds and floral patters adorning the cloak and dress of the young woman who awaits Venus’ arrival, ready to cover her modesty. As she stands naked and freshly born, Venus covers her nakedness with her long, free flowing hair.

The shell at the center of the image is an essential part of the painting’s composition. Seashells and sea creatures have held deep symbolic meaning in art and literature throughout human history.

Seashells are often associated with love and fertility. In some cases, the seashell can be seen as symbolic of female genitalia. Medieval Christian traditions associate seashells with pilgrims.

In some new age traditions, seashells are used to symbolize the unconscious and are associated with emotions. Thanks to their connection to the sea and water, they are also evocative of peace and tranquility.

Scallop shells appear in many Renaissance paintings, including Leonardo da Vinci’s Annunciation, where a scallop shell appears on a small alter to the right of the Virgin Mary as the angel Gabriel tells her that she is bear the child of God.  In Christianity, the scallop shell in particular represents salvation. In Hindu tradition, scallop shells are a symbol of the goddess Lakshmi, consort of Vishnu who was said to be ‘born of the churning ocean’, offering a parallel to Venus herself.

The size of this particular scallop shell which becomes Venus’ vessel of transport to the shore, is exaggerated. This type of exaggeration is also found in many classical depictions of Venus arriving to land. In this painting, Venus stands naked, head tilted and hair flowing at the very center of the painting. Perched delicately and upright on her shell, balancing precariously as the winds blow her to the shore.

The painting speaks of the power of fertility and female sensuality. Venus, arriving fresh from the oceans, is at once pure and sensuous. Her demeanor, her nakedness and her direct stare out of the canvas provide her with a stature that is at once gentle and alluring and magical, just like the delicate shell on which she balances and seems almost to form part of. Venus’ scallop shell is an extension of her raw femininity, delicate, but standing large and creating the central focus of the image. Just like Botticelli’s beloved Florence, Venus and her scallop shell demonstrate an embodiment of beauty and grace that defies expectations by managing to maintain a sense of great power and majesty.