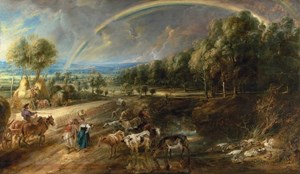 A detailed account of how two of Rubens masterpieces were not only restored but reunited after more than 200 years apart by the National Gallery.

The National Gallery’s newly restored masterpiece by Peter Paul Rubens, 'An Autumn Landscape with a View of Het Steen in the Early Morning', probably 1636, will go on public view following extensive work by the gallery’s conservation team.

The magnificent landscape paintings depict Rubens’s beloved manor home and estate, Het Steen, in Antwerp, which was bought the year before he made the two pictures; a purchase made possible due to the wealth and status he had gained as a hugely successful artist and diplomat. Although originally intended as a pair, these panoramic masterpieces parted ways upon arrival in London in 1803, with one entering the National Gallery Collection and the other going to the Wallace Collection. 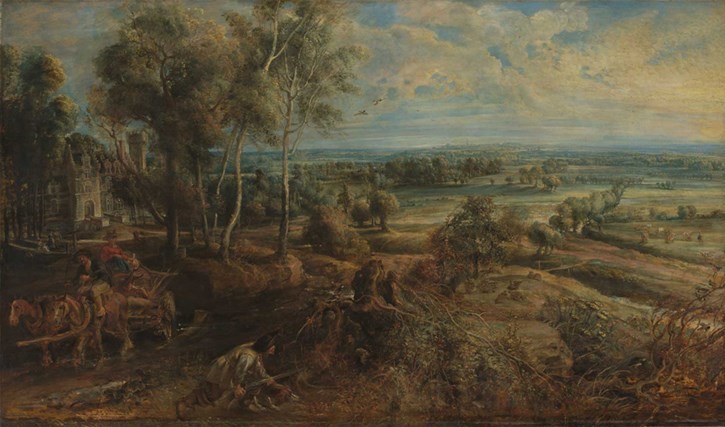 Pre-conservation treatment: Peter Paul Rubens, 'An Autumn Landscape with a View of Het Steen in the Early Morning', probably 1636 via The National Gallery, London.

The remarkable treatment performed by the Gallery’s conservation team on 'Het Steen' has so far proven revelatory. Layers of aged, discoloured varnish (some over 75-years-old) have been removed to reveal the depth and vibrancy of Rubens’s original colours, and a comprehensive structural repair has been made to the highly fragile network of panels. This process is currently being documented in a series of new ‘behind the scenes’ films, sponsored by Nikon, which can be viewed on the National Gallery website.

In the first film, it is astonishing to see the original colours and details emerging from the yellow varnishes, for the painting to mirror more closely the freshness and vibrancy of how it would have appeared to Rubens in the 17th century. As the layers are shed, it is evident how changed the landscape is, with Rubens’s amazing juxtaposition of the yellow sunlight hitting the white clouds and the cool blues leading the viewer gently back into the receding landscape. Although his religious commissions and grand portraits were commercially successful, we know that landscape painting was a subject close to Rubens’s heart, one that brought him great joy. It is particularly poignant to see the exuberant impasto revealed and the original, bold brush work freed. Now even the smallest details, like the bits of pure white, dotted to suggest the bubbling of a brook as it turns a corner, are visible to the naked eye. 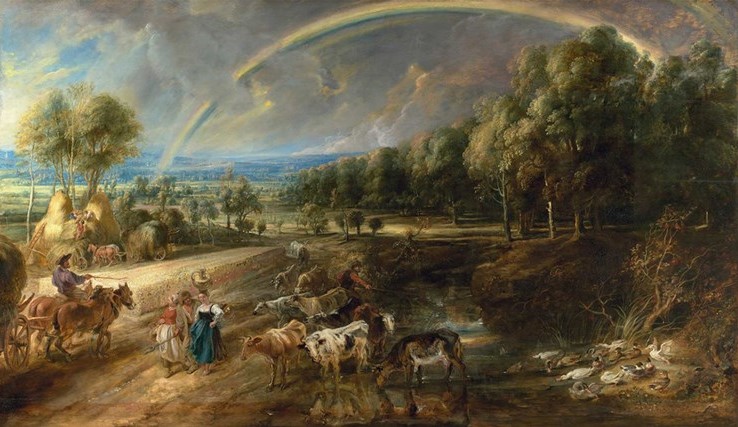 Peter Paul Rubens, 'The Rainbow Landscape', c.1636, via National Gallery from The Trustees of the Wallace Collection, London

In the second film, one of our Conservators and panel specialists makes repairs to the 400-year-old oak and poplar panels on which the work was painted. The construction of the panel provides an important clue to understanding the intended audience of the picture – we can be reasonably sure Rubens made these pictures for his own delight because of these small and unevenly shaped panels, patched together in a fashion that would be unacceptable to a collector. The structural treatment was a particularly delicate process; the panel is very thin considering its large size and was split and severely damaged as a result of great frosts in London in 1947. The repairs strengthened the joins from the three campaigns of construction where the panel had been enlarged over the years.

Larry Keith, the National Gallery’s Head of Conservation and Keeper says: “It was quite a special painting because it was painted for his own pleasure. Everything you see here is him, it is wholly autograph…taking off the varnish is quite revelatory, allowing you to see an artist really working for himself at the peak of his powers in a completely free and personal way.”

'Het Steen' was in Rubens’s possession when he died in 1640, together with its companion, 'The Rainbow Landscape'. Clearly these were deeply personal pictures, pictures which Rubens chose to live alongside, to display in his own home. It seems only fitting that they are to be reunited after over two centuries apart, as the artist intended.

'Het Steen' will be unveiled this spring at the Wallace Collection’s exhibition (21 April 2021 – 15 August 2021) where it will be reunited with its pendant, 'The Rainbow Landscape', probably 1636 (The Wallace Collection) after being apart for over two centuries.