A Christmas Present for the UK – Orazio Saved 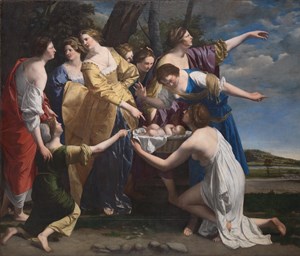 'The Finding of Moses' had been on generous long-term loan to the National Gallery from a private collection for almost twenty years – so long that many people assumed it already formed part of the national collection. It has been the subject of talks, exhibitions, publications and educational activities, and is a focal point of the Italian Baroque gallery where it is displayed alongside masterpieces by artists such as Caravaggio and Guido Reni.

The National Gallery said a huge thank you to the hundreds of members of the public who have donated to help it raise the last £2 million it needed to buy a painting of outstanding importance for the national heritage – The Finding of Moses by Orazio Gentileschi.

This means the painting will now stay on free public display in Trafalgar Square, for the enjoyment and inspiration of future generations.

The Finding of Moses has a remarkable place in British history. It is one of just a handful of works painted during Orazio Gentileschi’s 12-year residence in London at the court of King Charles I; commissioned to celebrate the birth of the future Charles II and intended to hang in the Queen’s House at Greenwich. 'The Finding of Moses' plays an important role in the National Gallery, being intrinsically linked to our recently acquired painting by Orazio’s daughter Artemisia Self Portrait as Saint Catherine of Alexandria. Until today, there was only one* Orazio Gentileschi work in a UK public collection. 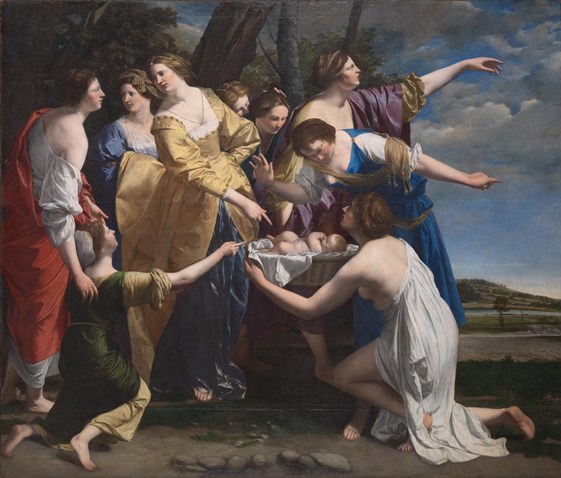 'The Finding of Moses' had been on generous long-term loan to the National Gallery from a private collection for almost twenty years – so long that many people assumed it already formed part of the national collection. It has been the subject of talks, exhibitions, publications and educational activities, and is a focal point of the Italian Baroque gallery where it is displayed alongside masterpieces by artists such as Caravaggio and Guido Reni.

The painting has been an acquisition priority for the National Gallery since 1995, when we first attempted to buy it.
The full cost of 'The Finding of Moses' is £22 million; however, the net cost to the National Gallery is £19,471,340 by a private treaty sale arranged through Sotheby’s and Pyms Gallery.

Culture Secretary Nicky Morgan said: 'This beautiful painting, which has been an important focal point of the National Gallery's collection for so long, will now remain on permanent display for current and future generations to study, admire and be inspired by. I congratulate the National Gallery and everyone who has helped make this happen.'

As a charity, the National Gallery depends upon public generosity to help it achieve great things and so we are enormously grateful for exceptional grants of £2.5 million from the National Heritage Memorial Fund and £1 million from Art Fund.

Sir Peter Luff, Chair of the National Heritage Memorial Fund, said: ‘This widely admired masterpiece is also a significant piece of our national heritage with its own compelling story. Millions have had the pleasure of admiring it over two decades at the National Gallery and the Trustees of the National Heritage Memorial Fund agreed it was vital to make a major contribution to securing its future. We are delighted that the Gallery has purchased the picture and so ensures millions more in the future can appreciate this example of Orazio Gentileschi’s work and its wider historical importance.’

Stephen Deuchar, Director of Art Fund, said, 'Orazio Gentileschi’s 'The Finding of Moses' is a masterpiece of visual brilliance and epic storytelling, whose acquisition Art Fund’s trustees supported with £1 million – one of only a handful of grants of this magnitude we have ever given. Our enthusiasm is clearly shared by everyone who has donated to the Gallery’s public appeal. Together we have secured its place on the walls of the National Gallery where it will be enjoyed by everyone, forever.'

A further £500,000 of gifts left in wills to the National Gallery is also being used towards the acquisition.

National Gallery Director, Dr Gabriele Finaldi, said, ‘From the small gifts of a few pounds to those of many thousands, I am really thrilled that so many people have contributed in the last lap of the campaign to enable us to acquire the painting for the nation. Big donors and little ones have ensured that 'The Finding of Moses' can be enjoyed by everyone; our thanks to all of them.’