Beyond Stardom: Museum Barberini in Potsdam Shows an Intimate Side of Picasso’s Work 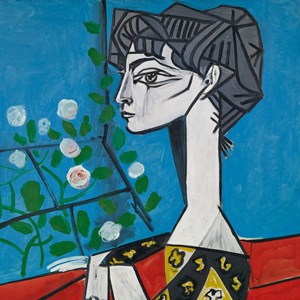 The new exhibition Picasso: The Late Work. From the collection of Jacqueline Picasso (Until 16th June 2019) which only opened in March in Museum Barberini in Potsdam sheds light on these precious decades of the works by employing around 140 works exclusively from the collection of Jacqueline Picasso (second wife of Picasso), most of which have never seen the public light before and are only known to exist through the circulated photos of famous photographers like Lucien Clergue, David Douglas Duncan, and Edward Quinn, showing Picasso and his wife in the studios of La Californie, in his workshop at Mougins and in their family retreat at Château de Vauvenargues in Provence.

Picasso is undoubtedly one of the most celebrated artists of the 20th century with his works being all over the world in major collections and museums and his artworks selling in auction houses for eight-digit sums. 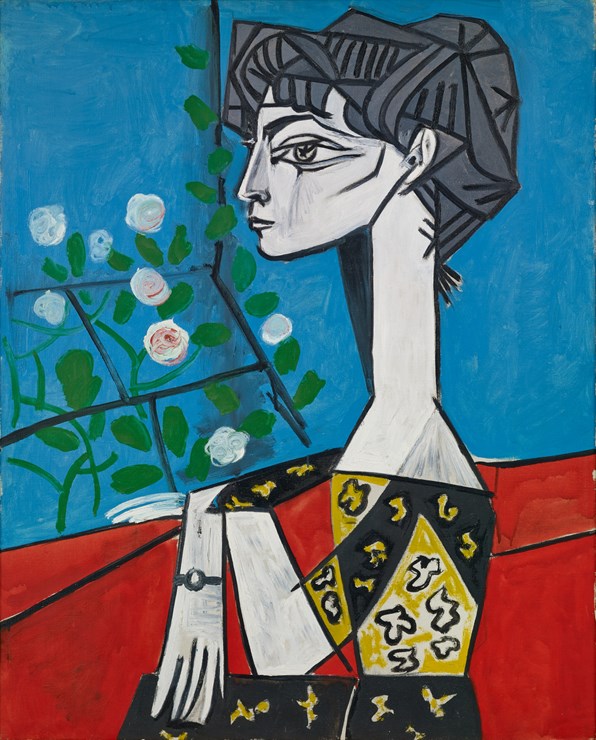 Museums have been devoted to his name in his birthplace Málaga, in Barcelona, and in Paris. Much has been said and written about Picasso but yet the last two decades of his artistic life have been largely ‘unpopular’ with major museums and institutions ‘[having reservations and keeping their distance]1’ from showcasing it. Part of the reason for this was the ‘unfair’ accusation of Picasso’s contemporaries and major critics (Greenberg, Berger) that his late work stopped being politically and socially relevant.

The new exhibition Picasso: The Late Work. From the collection of Jacqueline Picasso (9th March – 16th June 2019) which only opened in March in Museum Barberini in Potsdam sheds light on these precious decades of the works by employing around 140 works exclusively from the collection of Jacqueline Picasso (second wife of Picasso), most of which have never seen the public light before and are only known to exist through the circulated photos of famous photographers like Lucien Clergue, David Douglas Duncan, and Edward Quinn, showing Picasso and his wife in the studios of La Californie, in his workshop at Mougins and in their family retreat at Château de Vauvenargues in Provence. The works cover the periods from early 50s until Picasso’s death in 1973, featuring the unfinished painting Figures started in 1972, being one of the last works Picasso started before his death. 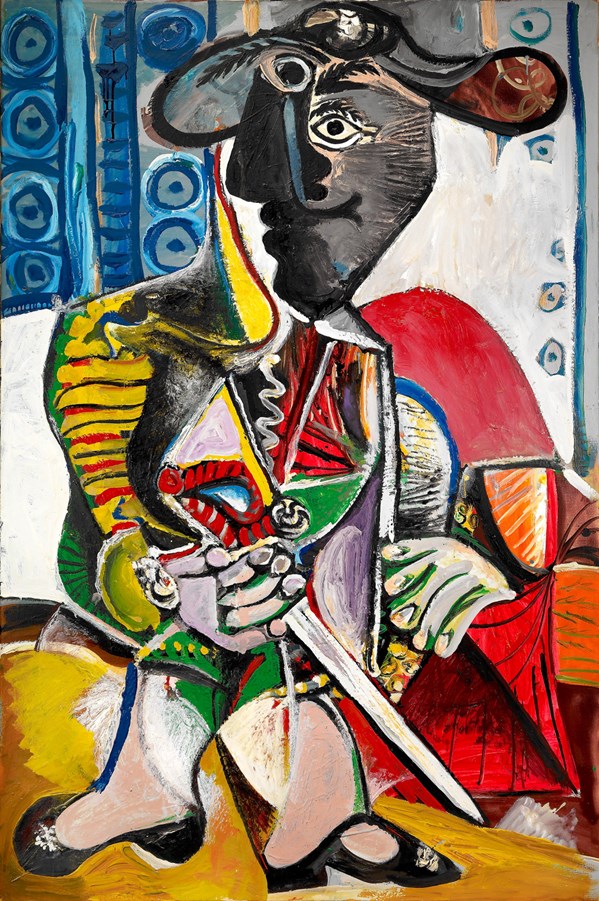 In this exhibition, a new, unseen and intimate side of Picasso’s work and life is made available to the public, namely his relationship with his Jacqueline, their life with Jacqueline’s daughter Catherine (who is also the lender of all the works of the exhibition) and Picasso’s life in his atelier and Villa Californie (now known as Pavillon de Flore) in Cannes. The two floors across which the exhibition spans, are divided into thematic sections such as the relationship of Picasso with his wife, Picasso’s ‘Orientalism’ and the female figure, representations of the manly figure, Mythology and music, and architecture.

Another highlight of the exhibition is the original trumpet player drawings displayed inside a standing Plexiglas base on the floor right and left of the two walls set up precisely to represent an image of Picasso sitting on the doorstep of the terrace of his Villa; this curatorial decision opens up the way to the rest of the room, inviting us inside the mysterious world of Picasso and making us feel like we are ‘home’. Yet, the most important part is that the focus is not only on Picasso as a genius, a pioneer of Cubism and an art icon but more on Picasso as a person with an own private life, an emotional human figure with lots of interests and sensibilities, and a man trying to crystallize and uncover the beauty of his partner. A sneak peek into a star’s diary. 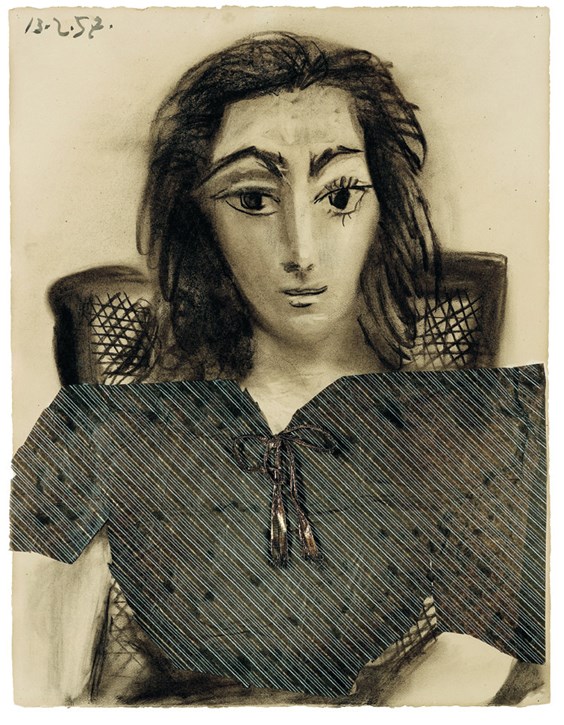 The intense graphic qualities and vibrant colors of the works reveal the influences that major artists had on Picasso. The series of ‘oriental’ women paintings and the ‘scarves found in some of Jacqueline’s portraits are clearly connected to the exotic world of Delacroix’s masterpieces, yet they are also a representation of the gypsy-inspired scarves many women would wear on their heads over the following two decades. In layers of meaning, Jacqueline is portrayed within an art historical variation on a Delacroix-inspired character while she may have also been seen as a woman modishly ahead of her time. Today, it would be read as an innocuous fashion statement. Then, it was a sign that daily life was no longer strictly codified but could very well be sourced from popular culture, or further still, from cultures that had been deemed undesirable’2. 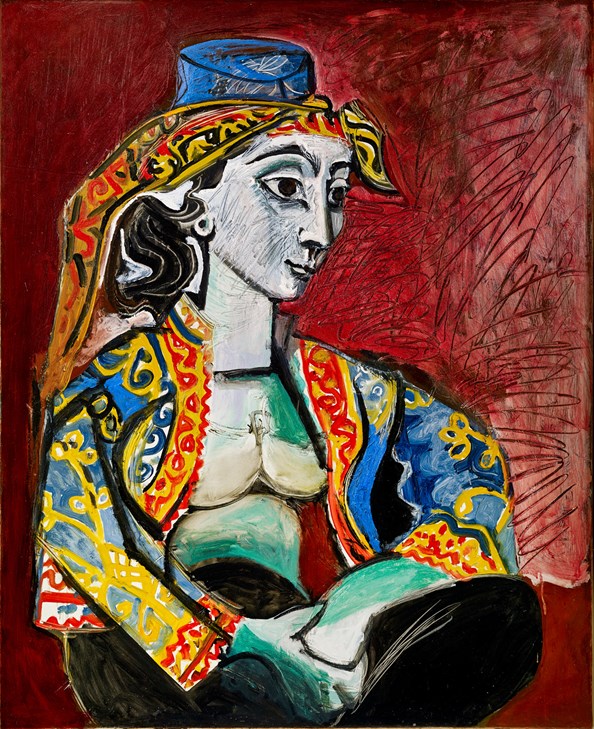 The variety of the media and thematic of the works provides a unique perspective into the last creative decades of Picasso’s life while the deem lighting transforms the exhibition into a sanctuary-like temple of art.

1 Bernardo Laniado-Romero , ‘Picasso Then and Now: An Introduction’, p. 9