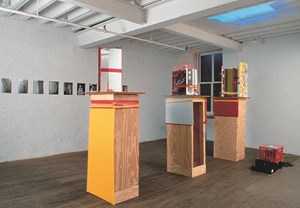 "The assemblage-type sculpture may be today’s most viable art form. Its ugly-duckling looks, rough edges, disparate parts and weird juxtapositions help stave off easy art-market absorption while also reflecting our fearful, fractured, materially excessive times back at us."

With a career spanning four decades, Isa Genzken has continually reinvented the language of sculpture by creating objects inspired by popular culture and historical events that explore the complexities of contemporary realism.

Engaging a diverse range of media such as wood, plaster, concrete, textiles, and detritus and working in a variety of modes, including sculpture, photography, filmmaking, painting, drawing, and collage, Genzken transforms vernacular materials into wholly unique forms. Her inventive, ad hoc approach to making, as well as her fearless embrace of chaos and change, has inspired a generation of artists, even as she continues to adapt, expand, and redefine her protean oeuvre.

“We’d be hard pressed to name an artist with a more textured and dynamic sculptural practice than Isa Genzken,” says Nasher Director Jeremy Strick. “Her work not only straddles an array of forms that complicate and enrich our understanding of sculpture, she also consistently challenges the way an artist’s career and oeuvre might look, breaking apart the notion of specialization within an individual studio practice. Her work can feel utterly urgent and visceral—fraught with emotion—while at other times, objects are rendered with such precision as to seem devoid of human touch. This range of material and conceptual rigor has positioned Genzken as a major influence on younger generations of artists working today amid the clamor of the digital age, offering permission and encouragement to subvert norms and invent new possibilities.” 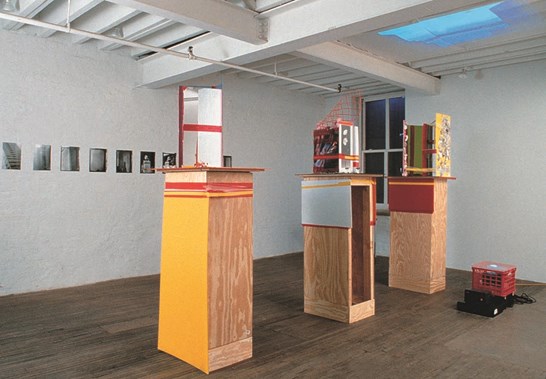 Born in 1948 in Bad Oldesloe, Germany, Genzken is part of a generation of postwar German artists who inherited a fraught national history. While some artists turned to abstraction to avoid the subject of Germany’s past atrocities, others, such as Gerhard Richter, Anselm Kiefer, Sigmar Polke, and Genzken, confronted the traumas and aftermath of World War II by creating works that emphasized material culture and incorporated elements of Pop art and American Minimalism. Genzken studied fine arts, art history, and philosophy in Hamburg, Berlin, and Cologne before completing her studies at the Academy of Fine Arts in Düsseldorf in 1977. 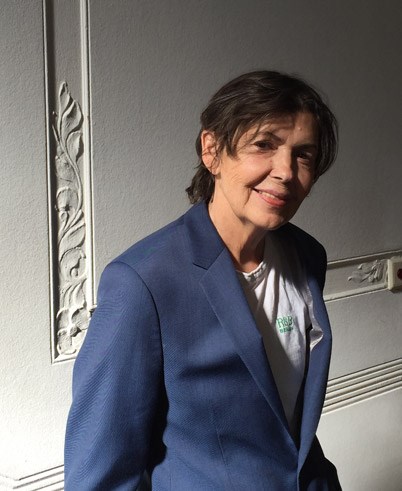 During that time, Genzken developed a broad network of contacts and references in an environment enriched by the Academy, the international program at the Kunsthalle, and at the Konrad Fischer Gallery, which was the primary advocate of Minimalism, process-based art, Land art, and Conceptual art in Germany. There, Genzken became affiliated with artists on the leading edge of Minimalist and Post-Minimalist sculpture, and in 1976 she would have her first solo show at the Konrad Fisher Gallery. While Genzken’s earliest works—her series of  (1976–83), in particular—formally resemble Minimalist sculpture, their associative aspects break with its hermeticism.

“Of course, it was exactly this ‘content’ that I wanted to bring back into the Ellipsoids,” Genzken says, “So that people would say, ‘It looks like a spear,’ or a toothpick, or a boat. This associative aspect was there from the very beginning and was also intentional, but from the viewpoint of Minimal art, it was absolutely out of the question and simply not modern.” 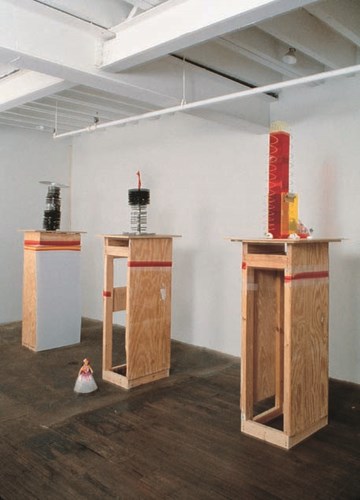 Central to Genzken’s artistic development were her many visits to New York City. Starting in 1960, Genzken made frequent trips there, where she admired the architecture and the city itself. It became the subject of several bodies of work throughout Genzken’s career, including her bound notebooks that comprise the work I Love New York, Crazy City (1995–96). Understood as the artist’s first significant assemblage, I Love New York was intended as a city guidebook, featuring photographs, hotel bills, posters, tickets, napkins, receipts, and notes on hotel stationery. Genzken translated the contents of this book—found materials, detritus—into three dimensional sculpture for the first time in her exhibition Fuck the Bauhaus (New Buildings for New York) at New York’s AC Project Room in 2000. The show featured six sculptures set on rough plywood pedestals, resembling disheveled architectural models, cobbled together from humble materials such as cardboard, foam core, caution tape, plastic mesh, and glue, and represented Genzken’s seminal foray into sculptural assemblage. Fuck the Bauhaus signaled a new direction in Genzken’s practice, as the artist transitioned from construction and fabrication to handmade assemblage. Art critic Peter Schjeldahl later recognized the exhibition as “the starter’s gun for a movement”—a reference to the shift in contemporary art production toward an “unskilled” aesthetic best illustrated by the New Museum’s 2007 group exhibition Unmonumental: The Object in the 21st Century.

Roberta Smith described this so-called movement in her review of the show:

«The thesis here is that assemblage-type sculpture, rampant at the moment, may also be today’s most viable art form. Why? It tends to be low-tech, modest in scale, made with found objects and materials and structured in ways that are fragmented if not actually disintegrating. Its ugly-duckling looks, rough edges, disparate parts and weird juxtapositions help stave off easy art-market absorption while also reflecting our fearful, fractured, materially excessive times back at us.» 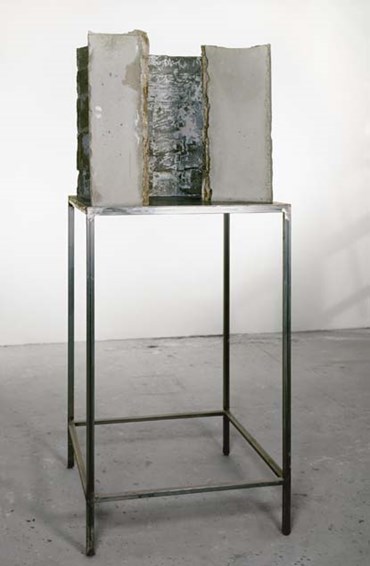 Smith would later declare assemblage “the central, most robust aesthetic of our time,” referring to Genzken as the “presumptive éminence grise” of the Unmonumental exhibition.

The work is always evolving and therefore her influence is exceptional on artists of all ages.”

Throughout her formally diverse body of work, Genzken’s interest in remain constant. It is in the combination of objects that her works find their meaning, as the artist explains, “There is a permanent misunderstanding regarding the materials I use. I am not interested in readymades. The meaning is in the combination of things. […] I want to animate the viewers, hold up a mirror to them…” 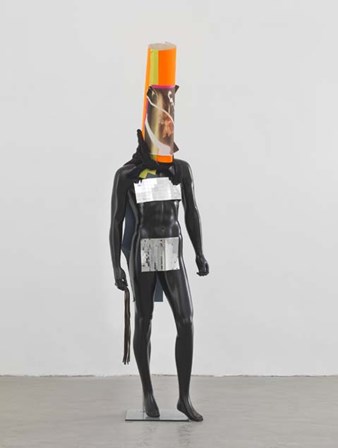 Among her most powerful bodies of work is the sculptural ensemble Ground Zero (2008), which the artist made following a close reading of the open call for design proposals for the former site of the World Trade Center. Though never submitted, the sculptural assemblages reflect Genzken’s adherence to the rules set forth in the open call for proposals and together represent an earnest, if humorous, plan for the site. As with her sculptures in Fuck the Bauhaus, those Genzken assembled for Ground Zero include structures representing aspects of the built environment: a parking garage, church, hospital, disco, clothing shop, and memorial tower constructed from materials as diverse as silk flowers, shopping carts, plastic fan covers, and a hospital gown. Though hypothetical, Genzken’s proposal was an homage to New York and represented the kinds of buildings she felt reflected the essence of life, culture, and the city.

In 2012, Genzken turned her attention to the body, through a series of sculptures that play on the conventions of modernist statuary and continue the artist’s explorations in form, color, and texture. Titled Genzken’s figurative assemblages comprise mass-produced mannequins “wearing” myriad coverings such as jackets, sweaters, hats, and masks. They feel improvised, both in posture and attire, and certain of their surfaces bear the mark of the artist—painted faces, arms and legs covered in crayon, for example. The figures are commonly installed in groups and suggest a crowd of eccentric urban types. Walking among them, the sculptures conjure a human presence and relationships between figures develop, as do social and psychological dynamics. Many of the garments and accessories donned by the mannequins are drawn from Genzken’s wardrobe—pieces of herself dispersed as decoys or alter egos. The work Schauspieler II (2014) , for example, comprises a black male mannequin and several elements suggestive of the artist: a black and brown knit sweater drapes around the mannequin’s shoulders, while its head is wrapped in a mask of bright orange paper with a color image of the artist affixed to it. The paper mask is precariously secured to the sweater with a safety pin, indicating the article of clothing is Genzken’s. Mirrored foil covers the figure’s backside, chest, and groin. Parts of the body that would reveal the mannequin’s gender are otherwise obscured, while the viewer’s reflection would in turn “dress” the mannequin. Through this figurative assemblage Genzken has created a work that is a proxy for herself and a reflection of its viewer. 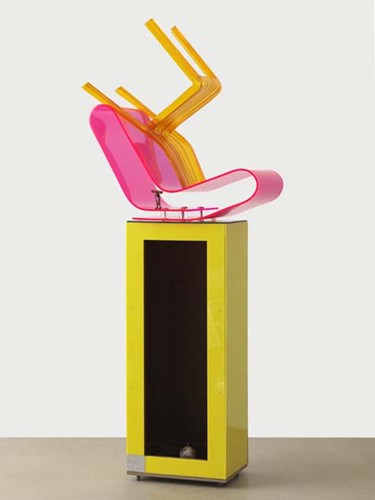 Absent a viewer, the sculpture reflects its surroundings, visually combining architecture and the body—an overarching theme throughout Genzken’s kaleidoscopic oeuvre. Her restless transformation of modes can be attributed to a self-confessed effort to avoid “the already known.”

In reflecting on her career, Genzken says, “For a long time, I went about my work very conceptually. […] I had an idea and I realized it forcefully. Then I stopped doing that suddenly and a new phase started: Just go ahead. And yet the rigor of all those years is still in me.”

Isa Genzken was born in 1948 in Bad Oldesloe, Germany, and lives and works in Berlin. She studied fine arts, art history, and philosophy in Hamburg, Berlin, and Cologne, before completing her studies at Kunstakademie Düsseldorf in 1977. Genzken’s work has been the subject of many major museum exhibitions, including traveling surveys organized by the Rheinisches Landesmuseum Bonn, Germany (1988–1989); the Renaissance Society at the University of Chicago (1992–1993); Museum Abteiberg, Mönchengladbach, Germany (2002–2003); and Whitechapel Gallery, London (2009). She has also been featured in solo exhibitions at venues including the Kunstverein Braunschweig, Germany (2000); Museum Ludwig, Cologne (2002; organized by the Gesellschaft für Moderne Kunst on the occasion of the artist receiving the Wolfgang Hahn Prize); Camden Arts Centre, London (2006); Galerie im Taxispalais, Innsbruck, Austria (2006); Secession, Vienna (2006); and Museion, Bolzano, Italy (2010). Her work has been prominently featured in international biennials and group exhibitions including documenta 7, 9, and 11 (1982, 1992, and 2002), Skulptur Projekte Münster (1987, 1997, and 2007), and the Venice Biennale (1982, 1993, 2003, 2007, and 2015).

In 2013, the Museum of Modern Art, New York, in collaboration with the Museum of Contemporary Art Chicago and the Dallas Museum of Art, presented Genzken’s first American museum survey, Retrospective, reaching back to the mid-1970s. The exhibition highlighted the full range of her practice including sculpture, as well as paintings, photographs, collages, drawings, artist’s books, and films, making it the most comprehensive presentation of her work to date. The recipient of the 2017 Goslarer Kaiserring (Emperor’s Ring) award from the city of Goslar, Germany, the artist is represented in museum and public collections worldwide, including the Dallas Museum of Art; Gemeentemuseum, The Hague; Hirshhorn Museum and Sculpture Garden, Washington, DC; Museum Boijmans Van Beuningen, Rotterdam; Museum of Contemporary Art Chicago; Museum of Contemporary Art, Los Angeles; Museum of Modern Art, New York; Museum Ludwig, Cologne; Städtische Galerie im Lenbachhaus, Munich; Stedelijk Museum Amsterdam; and Van Abbemuseum, Eindhoven.