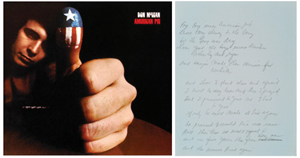 On April 7, Christie’s New York will auction the original manuscript and notes to Don McLean's "American Pie," sold by the singer-songwriter.  Arguably the most iconic and recognizable American song of the Twentieth Century, the Recording Industry Association of America and the National Endowment for the Arts named it a “Song of the Century.” Its power remains as potent and as vital as when it was first released in 1971. This masterpiece of American arts and letters is estimated at $1 to $1.5 million. The original working manuscript and typed drafts for the song comprise of 16 pages, containing 237 lines of manuscript and 26 lines of typed text.

Since debuting on the airwaves in 1971, Don McLean’s “American Pie” has stood as one of the most important icons of twentieth-century American music. Alternately wistful, buoyant, and enigmatic, the singer-songwriter’s masterpiece became the anthem of McLean’s own “generation lost in space,” and continues to resonate in the present day. In the span of just six verses, McLean managed to depict with poetic authority the turbulent upheavals of the latter half of the twentieth century. In doing so, he created an emblem that stands alongside the work of post-war figures such as Andy Warhol, J.D. Salinger, and Bob Dylan in its importance to the American cultural canon. For the musician himself, the writing of “American Pie” was a means of capturing and examining the American zeitgeist; it was, McLean stated, “part of my process of self-awakening; a mystical trip into my past.”