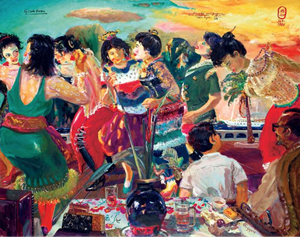 The history of Modern Indonesian painting is closely linked to the Dutch presence in the country. For the European newcomers Indonesia was a mysterious paradise, where time had stopped amid picturesque land and seascapes. This was the Indonesia they saw and this is how they wanted it recorded on canvas which meant that state officials and short-term visitors were looking to buy art that embodied this particular vision...

The history of Modern Indonesian painting is closely linked to the Dutch presence in the country. For the European newcomers Indonesia was a mysterious paradise, where time had stopped amid picturesque land and seascapes. This was the Indonesia they saw and this is how they wanted it recorded on canvas which meant that state officials and short-term visitors were looking to buy art that embodied this particular vision. As a result works with unspoilt seas, rivers, mountains, rice fields, farmers, rice terraces, palms, bamboos were massively produced to meet the demand. But these paintings, called “Mooi Indie” (Dutch for “Beautiful Indies”), were not the Indonesia that the artists felt.

In October 1938, the Union of Indonesian Fine Artists (PERSAGI) was formed to solve two burning issues at that time. The first problem was that local artists were not allowed “to participate in the colonial art world” i.e they were very rarely allowed to present their works in public. The second issue was that they wanted to depict the reality of Indonesia “not the romantic concepts that the foreign rule fed”. Western presence aside, Indonesia is a melting pot of Javanese, Balinese, Islamic, Buddhist, Hindu and Christian cultures and the artists wanted to be able to show this diversity.

The colonial period led to intense cultural exchange with the West in the course of which many styles which had developed in Europe gradually entered Indonesia at once and blended with the already existing indigenous traditions. The result was a unique mixture of themes and styles.

Below are five classic masterpieces which reflect the artistic shifts and debates in the Indonesian art scene in the past century. 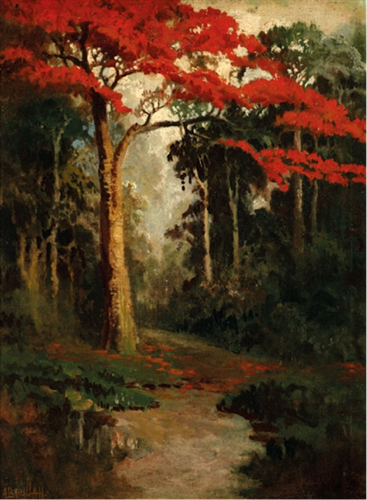 “Flamboyant Huile sur toile” is a classic “Mooi Indie” painting. Picturesque scenes of nature painted in dark colours betray the influence of the Dutch landscape painting tradition. In spite of that however the majority of the landscapes are in bright colours. 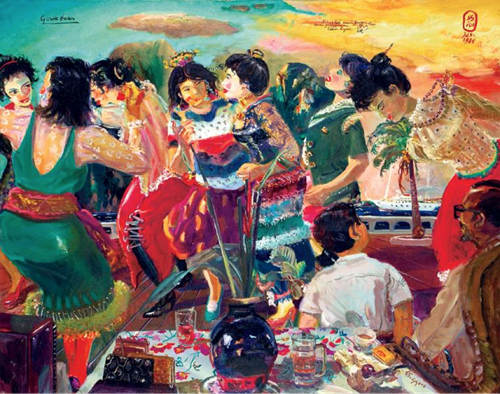 “The New Movement” by S. Sudjojono

Sudjojono was the first painter to challenge the colonial influence on art. A sort of a rebel he rejected the official academic style and became a spokesperson for PERSAGI. He campaigned for more “honesty” and emotion in art and frequently painted social themes and the life of the common people. It was him who coined the term “Mooi Indies”. 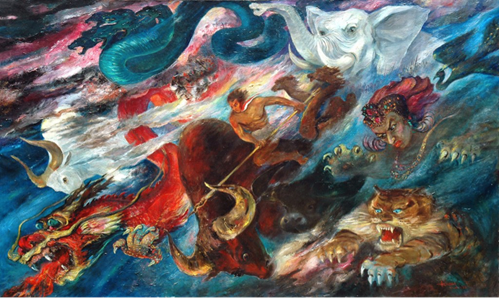 Hendra Gunawan further turned the focus from art for the tourists to art for the people. He is famous for painting “for the ordinary people” rather than to express his own innerscape. Motifs from the Javanese puppet show tradition are heavily employed throughout his practice again as a reference to the true Indonesian identity. 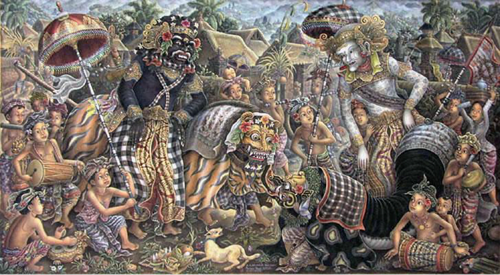 Anak Agung Gde Sobrat is considered as the leader of Balinese style paintings. This style combines scenes from the life of the ordinary people with motifs from the Indian classics “Ramayana” and “Mahabharata”. The result is a newly-crafted reality where tropical primitivism and demonic spirits inhibit the mundane every-day life. 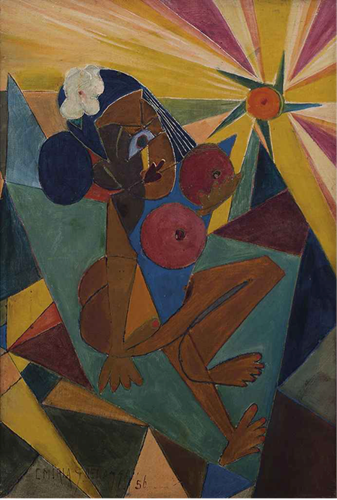 “Sun Bath” is notable in two different aspects. It reflects the opening of the Indonesian artistic practice to the European aesthetic tradition and it was painted by one of the few female artists at that time. Often called “the wild child” of Indonesian art Emiria Soenassa’s life is veiled in mystery. She was a self-taught artist who painted with the sole intention to express herself and had “little consideration for style and technique”. Later on she became the first female plantation manager in Indonesia before leaving the country. Where and how she died not even her friends knew.