Francis Bacon’s legendary Study For a Pope I 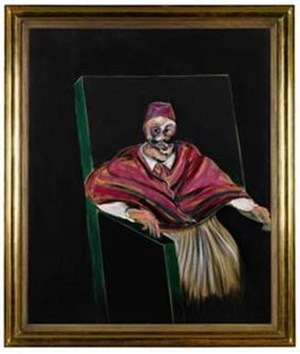 This monumental work will feature as part of a star-studded sale, alongside two newly rediscovered Bacon self-portraits (each estimated £10-15m), the most important collection of Andy Warhol dollar paintings in private hands, a rare ‘London Painting’ by Gerhard Richter (estimated £12-16m) created for his first major commercial exhibition in London in 1988, two of the finest works on paper by Kitaj and Auerbach to ever appear on the market, and a Lucian Freud painting given to Debo, The Dowager Duchess of Devonshire, by the artist in 2004. Of the 59 lots in the sale, some 17 are by British artists, accounting for an unprecedented 35% of the total value of the sale.

Highlights from the sale, including Bacon’s Study for Pope, will be on view at Sotheby’s New Bond Street galleries as part of the “Masterworks in Dialogue” exhibition running from Friday 12th to Monday 15th June. Please find attached dedicated press releases for Study For a Pope I, 1961 and Sotheby’s Contemporary Art Evening Auction on 1 July 2015.