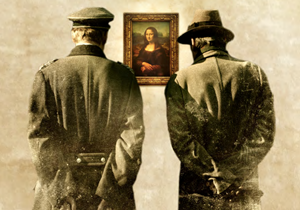 FRANCOFONIA is the story of two remarkable men, louvre director Jacques Jaujard and Nazi Occupation offcer Count Franziskus Wolff-Metternich - enemies then collaborators - whose alliance would be the driving force behind the preservation of museum treasures. FRANCOFONIA explores the relationship between art and power, the Louvre museum as a living example of civilization, and what art tells us about ourselves even in the midst of one of the bloodiest conflicts the world has ever seen.

FRANCOFONIA is the story of two remarkable men, louvre director Jacques Jaujard and Nazi Occupation offcer Count Franziskus Wolff-Metternich - enemies then collaborators - whose alliance would be the driving force behind the preservation of museum treasures. FRANCOFONIA explores the relationship between art and power, the Louvre museum as a living example of civilization, and what art tells us about ourselves even in the midst of one of the bloodiest conflicts the world has ever seen.

From the master director of FAUST (Venice Golden Lion), RUSSIAN ARK, MOLOCH and MOTHER AND SON. Throughout his vast filmography – documentary, fiction and others somewhere in between – Alexander Sokurov has demonstrated that a museum is much more than a place to preserve art. Museums are the veritable DNA of a civilization, the living organ of the city where the heart of a nation beats. Sokurov’s approach to a museum is nothing less than sacred. With FRANCOFONIA, he explores a historical chapter that we might know, but whose description does not take into account all the lines that run through it. Against the backdrop of the Louvre Museum’s history and artworks, Sokurov applies his unique personal vision onto staged re-enactments and archives for a fascinating portrait of real-life characters Jacques Jaujard and Count Franziskus Wolff-Metternich and their compulsory collaboration at the Louvre Museum under the Nazi Occupation.

The production of FRANCOFONIA brought together three countries and three producers familiar with Alexander Sokurov’s flms and his working methods for having already produced or distributed several of his flms. From France, Pierre Olivier Bardet (Ideale Audience) has produced and distributed Sokurov documentaries and elegies, including ELEGY OF A VOYAGE. From Germany, Thomas Kufus (zero one flm) has produced several Sokurov feature films, including MOLOCH and MOTHER AND SON. From the Netherlands, Els Vandevorst (N279 Entertainment) was a co-producer on Sokurov’s FATHER AND SON.

Over the course of eighteen months’ development financed by the producers, the Louvre, the MEDIA programme, France’s CNC, and the German-Russian Co-Development Fund, the special creative process of Alexander Sokurov was supported by contributing extremely precise factual information to nourish his own imaginary vision. There is nothing vague in his approach, but on the contrary, a freedom of interpretation that is all the greater as it is nourished by the many facts, images and sounds gradually amassed, translated, and organized so that he can inhabit them in his turn in order to try and find a truth: not a historical truth, nor one derived from hypothetical speculation, but rather an organic truth, the product of his highly personal, often unexpected vision. As an artist, Sokurov detects what we cannot see. In the case of FRANCOFONIA, the lines between documentary and fction fade, not to take us towards what is false, or reconstructed, but on the contrary to seek out the blinding revelation which enlightens, and the interpretative gesture which touches what is right and true.

What meaning can we give to the appropriation of a work of art by an occupying army? While in this case we are talking precisely about the German occupation of France during the Second World War, and while the occupying forces are driven by a specifc ideology – Nazism – there is no shortage of examples of other removals, pillage, expropriations, extortion and exports of art works in history. FRANCOFONIA is a meditation on the unique character of the work of art, and the common desire to incorporate what Walter Benjamin called the aura that emanates from it. Sokurov’s flm encourages people to think about the links between appropriation and domination, a political vision of the world and an aesthetic representation of it. In addition, it shows the special position occupied by museums in the public space of the West today.