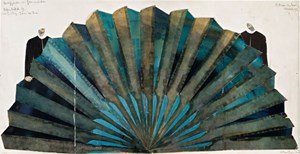 Discover the art of Gunilla Palmstierna-Weiss in a small exhibition full of gems, including drawings, collages, models and ceramic objects from her rich artistic practice between 1964 and 1984. Her commitment to art and politics has involved her in student riots, liberation struggles and cultural hubs all over the world, and always, somehow, in the midst of where it was all happening.

Discover the art of Gunilla Palmstierna-Weiss in a small exhibition full of gems, including drawings, collages, models and ceramic objects from her rich artistic practice between 1964 and 1984.

Gunilla Palmstierna-Weiss, born in 1928, has operated in the interface between stage design and visual art – in close dialogue with the international scene of intellectually and politically committed cultural workers. Born in Switzerland, raised in the Netherlands and Austria, she came to Sweden at the end of the Second World War. 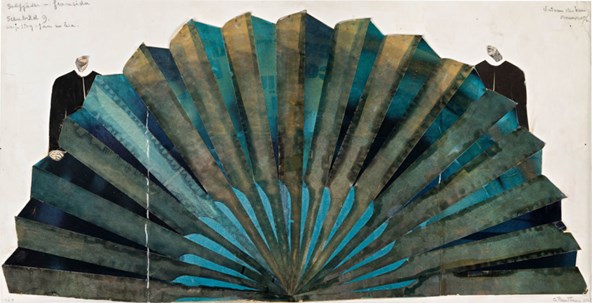 Palmstierna-Weiss belonged to the circle of artists and creative workers at the centre of Moderna Museet and its activities that were emerging in the early 1960s. Her commitment to art and politics has involved her in student riots, liberation struggles and cultural hubs all over the world, and always, somehow, in the midst of where it was all happening.

Sketching and model-making as a creative space

Gunilla Palmstierna-Weiss is primarily known as a stage designer, a profession that is largely characterised by collective processes of negotiation and collaboration. Drawing and architectural models, however, are two activities that comprise a private creative space.

This is particularly striking in Palmstierna-Weiss’ practice: her drawings and models are meticulous, exuding a delight in the media, encapsulated in time, research and ideas. They stand out as works in their own right, and this exhibition gives you the opportunity to experience them outside the context of the theatre.

Objects and details with a purpose

Her imagery is strongly influenced by the aesthetics of the Dutch De Stijl movement and the German Bauhaus school’s architectural programme, both in the symbolic function of colours and the approach to stage design – where each object and detail must serve a purpose.

These schools also propounded the idea of artistic mobility; Palmstierna-Weiss’s practice crosses genres and disciplines, continuously interweaving art, crafts, technology and reflection. Her professional career began in the field of ceramics and sculpture, specialising on public embellishments, a practice she continued to pursue alongside her stage design.

Apart from their aesthetic qualities, her drawings are deeply personal, expressing absurdism, lunacy, humour and darkness. In visual dramas, the individual characters perform grimaces, movements and physical ailments, along with collective situations where bodies build spaces in gatherings, armies and organisations.

A rich and extensive selection of her oeuvre is presented in the Pontus Hultén Study Gallery. This is Gunilla Palmstierna-Weiss’s first solo exhibition at Moderna Museet.