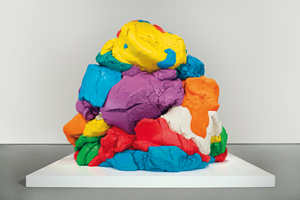 On May 17th, Jeff Koons’s monumental sculpture, Play-Doh, will highlight Christie’s Evening Sale of Post-War and Contemporary Art (estimate in the region of $20 million). Play-Doh was introduced to the public at the Jeff Koons retrospective put on by the Whitney Museum of American Art in 2014. Conceived in 1994 and finalized twenty-years later, Play-Doh quickly became regarded as one of the most integral works from the artist’s Celebration series. The unique sculpture will be installed in Christie’s Rockefeller Plaza galleries for an extended view beginning April 13th.

In 2014, Jeff Koons was given a retrospective at the Whitney Museum of American Art in New York. This ground-breaking show marked a new beginning for Koons: the debut of Play-Doh, a sculpture that had already become legendary in the two decades of its creation. This monumental sculpture is one of the largest and most complex works in Koons’s Celebration series, a group of works that commenced in the mid-1990s, and includes contemporary icons such as Balloon Dog, Hanging Heart, and Tulips. The Celebration series has become increasingly ambitious in its evolution, with Koons pushing fabrication techniques to new levels of precision, meeting his own desire for a meticulous finish.

The result of this single-minded dedication is clear in Play-Doh, which was painstakingly created over two decades. Looking at the crevices, curves and bubbles of its surface, as well as the matte colors with their faint sheen, the viewer could easily believe that this really was an enormous mass of Play-Doh. Yet this sculpture has been assembled using more than two dozen interlocking sections of painted aluminum. Gravity alone fastens them together, the weight of each part pressing down on the next. Koons’s exactitude runs to intriguing extremes: each of these pieces is painted in its entirety, not just the facet visible when Play-Doh is fully assembled. Even the palette was the result of unwavering dedication, as the Play-Doh colors of 1994 were skillfully recreated. This sculpture is almost architectural in its scope and intricacy, its surface belying the complexity behind the decades of its creation. And in each of the five versions of Play-Doh, the color configuration is unique.

The Play-Doh has been recreated in such a way that it appears to show the traces of the human touch in its assemblage—albeit blown out of proportion in its new gargantuan scale. In this way, Koons has managed to create a paradox: the surface resembles the Abstract Expressionist paintings of Willem de Kooning, yet this work is the result of two decades of research and perfection, of fabricators and scientists, metallurgists and modellers, rather than the swirling gestures of either a child with his Play-Doh or de Kooning with his paints. 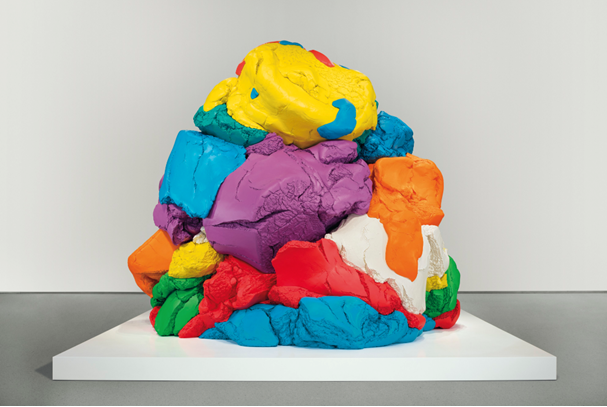 It is a mark of the importance that Play-Doh has achieved within Koons’s oeuvre that it has been published and exhibited extensively since it was first unveiled four years ago. Reviewing its debut at the Whitney show in Frieze, Chris Wiley would refer to it as, “one of his most important works to date,” while Roberta Smith described it in the New York Times as “a new, almost certain masterpiece whose sculptural enlargement of a rainbow pile of radiant chunks captures exactly the matte textures of the real thing.”