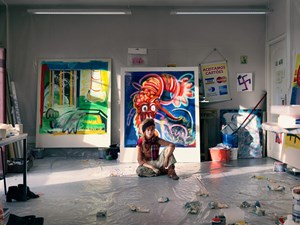 The Royal Society for the Encouragement of Fine Arts has tastes less grandiose than you might think. KoMASK or Koninklijke Maatschappij ter Aanmoediging der Schone Kunsten, as the body is more commonly known on the continent, has awarded their annual painting prize to an inspired piece of abject irony.

The Royal Society for the Encouragement of Fine Arts has tastes less grandiose than you might think. KoMASK or Koninklijke Maatschappij ter Aanmoediging der Schone Kunsten, as the body is more commonly known on the continent, has awarded their annual painting prize to an inspired piece of abject irony.

Masters Salon 2016 found a favourite with a loosely painted comic vignette going by the title, ‘Graduated from Harvard Business School’ by Jolijn Baeckelandt. Viewers will soon pick out an American sports referee complete with whistle and white gloves; you might think him an art handler. His eyes are closed in complacent denial of any other point of view.

Artdependence spoke to the 23-year-old Baeckelandt from her studio in the city of Ghent. She was in good spirits at her most recent piece of news.

AD: What has it meant to you to be named the winner of KoMASK 2016?

JB: I didn’t expect to win the prize, but two days ago I got the call and I was really happy. I was a bit speechless, because I didn’t expect it. But it’s a painting competition, especially for paintings. I think the jury members were also like a lot of painters themselves.

AD: How would you describe your style of painting?

JB: Most of the time I start from an idea and then I paint. I don’t think, Okay now I have to paint my style. And I have to develop my style on my own most of the time. It depends on what idea I am having and then I start to search for a way to connect the painting with the idea so it depends. The idea must fit with the painting so if for example I made a painting of symbols of Master Card and capitalism, I just painted that really flat, and romantically, just to see the contradiction between the romantic stuff and the capitalist stuff.

AD: From where do you draw your imagery?

JB: I start from reality. Maybe because some people would think I am really cartoonish, it’s  just about imagination. But that’s not true; I always start from something in my own world, something I spot outside. One of reasons it’s cartoonish is to be a means of resistance to a classical painting form.

AD: How important is humour in your work?

JB: Humour is really important but also really difficult. I think you can reach a lot of people with humour, and it’s also a good way to get people to see something. But it’s also difficult, humour, because all the time it can fall really flat. It gets superficial in a way, so I try not to do flat humour. If I use humour, it’s with irony or reference to a book, say.

AD: What’s it like to paint in Ghent, the home of the famous altarpiece?

JB: Actually it’s really nice at the moment I have my studio in the centre by coincidence. It’s an old building and it’s really the centre of the city. So it’s funny to see all the tourists in the summer. I have a balcony, also by coincidence. I didn’t expect to have a studio like this when I graduated. But it’s pretty cheap, a surprise. Ghent is not very tra la la or blah blah blah, but you can work.

AD: What’s next for you after winning this prize?

JB: I want to take time for myself, not to hurry up everything too fast. I think it’s important to be honest with myself with myself and my work. I will take my time. It’s important that you don’t rush to make choices. You have to make them on your own and not according to what people say. So it’s really nice the price I was happy about it, but I also want to take time to develop something and something good.

Masters Salon was open to MFA graduates from Antwerp, Brussel, The Hague, Ghent, Helsinki, Liège and Stockholm. Special mention should go to runner-up Lisa Maaranen, whose painting Soil also found favour with the Royal Society. Clearly regal patronage is alive and well, as has so often been the historic case with painting.