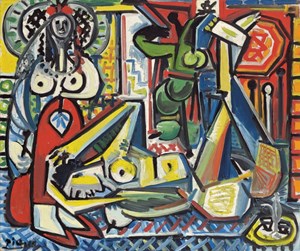 On 10 July Christie’s made auction history with ONE, a global live auction offering Impressionist and Modern, Post-War and Contemporary Art and Design.

The event saw global participation online via Christie’s LIVE online bidding channel, and where regional government advice allowed, clients and phone bidders in the salerooms. More than 80,000 people tuned in to watch ‘the new theatre’ unfold, with 60,000 of those accessing through social media in Asia.

‘This hybrid-format concept sale is a way to adapt and innovate,’ commented Christie’s chief executive officer, Guillaume Cerutti. ‘We wanted to stage something that accommodates the current situation and serves our clients wherever they are and however they wish to participate.’

The top price of the ONE  sale was achieved by Nude with Joyous Painting (1994), a late-career tour de force by Roy Lichtenstein, which realised $46,242,500. Painted in Lichtenstein’s signature ‘Ben-day’ dot style, the landmark canvas features a blonde American beauty alone in her bedroom, wearing nothing but a blue headband and red lipstick.

Ana Maria Celis, Head of Evening Sale, Post-War and Contemporary Art at Christie’s, described the iconic work as ‘the most important example of Lichtenstein’s last great series of Nudes to have ever appeared at auction’.

It was followed by Barnett Newman’s Onement V. Executed in 1952, it is one of six paintings in Newman’s breakthrough ‘Onement’ series, which marked the moment the Colour Field artist came of age. The painting realised $30,920,000.

Brice Marden’s Complements  diptych, above, painted between 2004 and 2007 and exhibited at New York’s Matthew Marks Gallery in 2007, also sold for $30,920,000, establishing a new world record for the artist at auction. With its orange and blue rectangles traversed by a wiry collection of snaking coils, it is a standout example of the artist’s late, vibrant gestural style.

Presided over by Elaine Kwok, the first leg of this international relay established two world auction records and saw active bidding in the Christie’s salesrooms in Hong Kong, Paris and New York, as well as via Christie’s LIVE.

The top lot was Gerhard Richter’s Frost (1) (1989), which sold for HK$79,255,000. A dazzling example of Richter’s Abstraktes Bild  paintings, it exemplifies the artist’s practice of continually laying down and then subsequently scraping off layers of paint with a squeegee, resulting in a fractured surface.

The Hong Kong section also saw strong results for George Condo’s Force Field  from 2010, which achieved HK$53,150,000, a world record for the artist at auction; and Yellow Quadrangle (1959) by avant-garde Japanese painter Takeo Yamaguchi. The largest of Yamaguchi’s works ever to come to auction set a world record at HK$15,125,000 — more than five times the high estimate.

Following a swift transition the Paris section got underway with Cécile Verdier at the rostrum. It was led by Jean Dubuffet’s Pourlèche fiston (1963), which fetched €6,528,500. Held in the same family collection for half a century, the painting represents the kaleidoscopic fusion of two worlds: the transformation of Dubuffet’s celebrated ‘Paris Circus’ series into his career-defining cycle, ‘Hourloupe’.

The second-highest price of the Paris leg came from Amedeo Modigliani’s 1909 portrait of Maurice Drouard, below, which fetched €4,485,500.

It was followed by Nicolas de Staël’s Plage à Agrigente, an exquisite work from the artist’s series based on his time in Sicily. Painted in the South of France in 1953, and unveiled in his landmark debut at Paul Rosenberg’s New York gallery shortly afterwards, it sold for €4,031,500.

Other highlights included Pierre Soulages’ Peinture 130 x 89 cm, 25 novembre 1950, which realised €3,237,000. This dynamic oil on canvas had not been seen in public since 1953, when it toured to Australia for the exhibition French Painting Today.

In London Jussi Pylkkänen was at the podium. Leading the auction was René Magritte’s monumental L’Arc de Triomphe, one of only a handful of Magritte paintings of such large scale still in private hands. Painted during the opening months of 1962, it features one of the most iconic motifs of Magritte’s post-war oeuvre: the tree. It sold for £17,798,750.

There were numerous other impressive results. Carnival and Lent (2006-2008) by Cecily Brown produced the second-highest price of the London leg at £4,859,750, while Gebeugter Trinker [Bent Drinker] by Georg Baselitz realised £4,600,000. After an international bidding battle, David Hockney’s 1988 Jade Plant sold for £4,178,750, nearly triple the low estimate.

Executed in 1959, and widely exhibited, Manolo Millares’ Cuatro 54 realised £1,091,250, setting a new world record for the artist at auction. Some two metres wide, it is a powerful large-scale example of the artist’s extraordinary burlap creations.

Led by Adrien Meyer, the fourth and final leg took the sale total to $420,941,042. In addition to the works by Lichtenstein, Newman and Marden (see above), other notable results included Picasso’s monumental Les Femmes d’Alger (Version F), one of a series of 15 canvases based on Eugène Delacroix’s masterpiece Les femmes d’Alger, which achieved $29,217,500.

Picasso created the series in a burst of activity between December 1954 and February 1955, assigning each work an identifying letter, from ‘A’ to ‘O’. What makes Version ‘F’ stand out is the way it marks a bridge between the first phase of the series (of regular-sized canvases) and the second, final phase (featuring much larger works). More than any other painting in the series, it also conveys the hothouse atmosphere of a harem.

Painted in 1962, it depicts a row of arcade machines, decorated in a vibrant mix of oranges and yellows. ‘Thiebaud is one of the most underrated and overlooked painters of recent times,’ says Stephen Jones, associate vice president of Post-War & Contemporary Art at Christie’s. ‘It’s only as we approach his 100th birthday that the world is really waking up to that.’