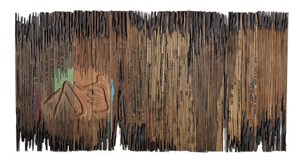 In the years following independence, El Anatsui was one of a group of artists to advocate the need for a new aesthetic, one that was not grounded in the design principles of European colonizers. He began to investigate the art form, uli, an ancient decorative scheme traditionally practiced by Igbo communities. It consists primarily of abstracted animal, plant and cosmic forms. At the same time, he began to incorporate nsibidi symbols into his work, a pictographic script employed by the Efik and north-eastern Igbo.

Born in Anyako in 1944, Anatsui's formative years were shaped by his experience of British colonial rule. The accepted histories of the African continent at that time were primarily written by European outsiders. Anatsui believed that this had led to great distortions, and sought to redress the problem through his art. His research into various writing systems and codes was an attempt to enter into the minds of the societies that developed them, providing alternative insider narratives.

On Grandma's Cloth is one of a series of carved wooden sculptures that the artist executed in the late 1980s and early 90s. These pieces are composed of wooden planks that have been scored with uli and nsibidi symbols. Whilst the materials and motifs are centuries old, they have been created with modern tools - the power saw and blow torch. The scorched, jagged fragments of wood represent the cultural devastation of colonialism, a metaphor for the way in which western powers had carved up and brutally divided the African continent amongst themselves.